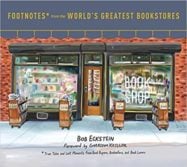 Those who write love to read, and those who love to read, love bookstores with a passion. Bob Eckstein, the noted New Yorker cartoonist, has created a unique and beautiful book, Footnotes From the World’s Greatest Bookstores: True Tales and Lost Moments from Book Buyers, Booksellers, and Book Lovers.

The 75 meticulously detailed paintings of fantastic bookstores by Eckstein feature some of the most charming and iconic bookstores around the world. The art is embellished with charming, bittersweet, and often humorous anecdotes by writers, thinkers, and dreamers who have visited them.

Some of these bookstores have gone by the wayside, many, thankfully, are still open for business. Here, Bob shares the bookstore adventures of three contemporary women authors. 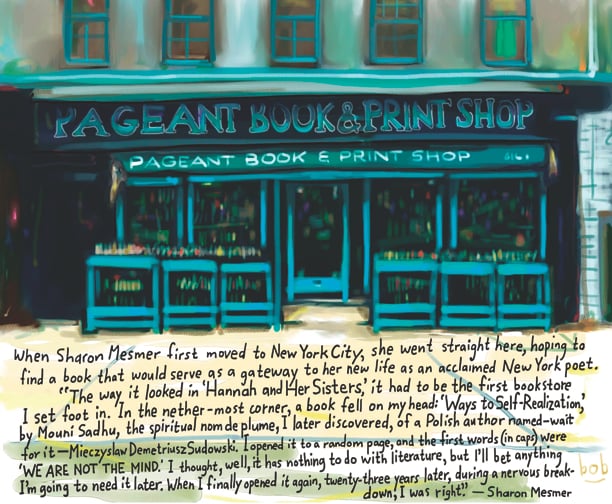 Pageant Book & Print Shop on 12th Street, Manhattan was in business from 1946 to 1999 until it became an online store. It has since returned as a small print shop on 4th Street.

When Sharon Mesmer first moved to New York City, she went straight here, hoping to find a book that would serve as a gateway to her new life as an acclaimed New York poet. “The way it looked in ‘Hannah and Her Sisters,’ it had to be the first bookstore I set foot in.

In the nether-most corner, a book fell on my head: ‘Ways to Self-Realization,’ by Mouni Sadhu, the spiritual nom de plume, I later discovered, of a Polish author named—wait for it—Mieczyslaw Demetriusz Sudowski. I opened it to a random page, and the first words (in caps) were ‘WE ARE NOT THE MIND.’

I thought, well, it has nothing to do with literature, but I’ll bet anything I’m going to need it later. When I finally opened it again, twenty-three years later, during a nervous breakdown, I was right.” (— Sharon Mesmer) 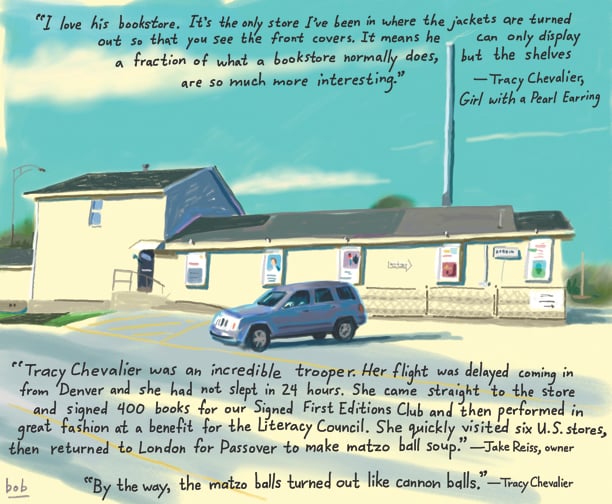 Alabama Booksmith of Birmingham sells only exclusively signed copies. All books are sold at regular retail prices and are displayed by cover instead of just spines.

“Tracy Chevalier was an incredible trooper. Her flight was delayed coming in from Denver and she had not slept in 24 hours. She came straight to the store and signed 400 books for our Signed First Editions Club and then performed in great fashion at a benefit for the Literacy Council. She quickly visited six U.S. stores then returned to London for Passover to make Matzo Ball soup.” – Jake Reiss, owner

“[BTW,] the matzo balls turned out like cannon balls. I love his bookstore. It’s the only store I’ve ever been in where the jackets are turned out so that you see the front covers. It means he can only display a fraction of what a bookstore normally does, but the shelves are so much more interesting.” (– Tracy Chevalier) 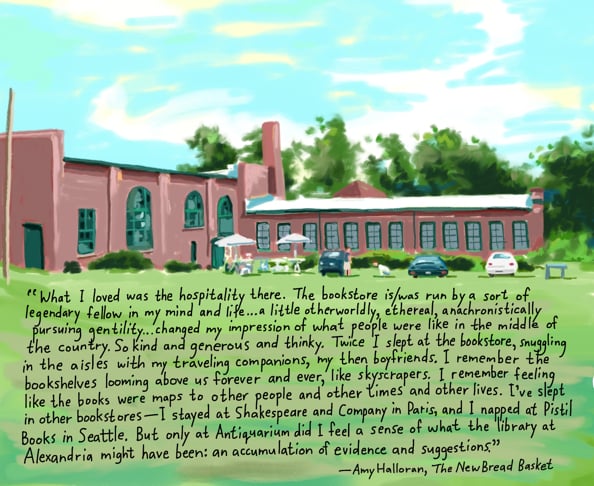 The Antiquarium Bookstore is located in Brownville, Nebraska, one of the three ‘Book Towns’ in the United States. Book Towns are rural towns with a large number of used book or antiquarian book stores where bibliophiles gather and literary festivals take place.

“What I loved was the hospitality there. The bookstore is/was run by a sort of legendary fellow in my mind and life…a little otherworldly, ethereal anachronistically pursuing gentility … changed my impression of what people were like in the middle of the country. So kind and generous and thinky.

“Twice I slept at the bookstore, snuggling in the aisles with my traveling companions, my then boyfriends. I remember the bookshelves looming above us forever and ever, like skyscrapers. I remember feeling like the books were maps to other people and other times and other lives.

I’ve slept in other bookstores–I stayed at Shakespeare & Company in Paris, and I napped at Pistil books in Seattle. But only at Antiquarium did I feel a sense of what the library at Alexandria might have been: an accumulation of evidence and suggestions.” (– Amy Halloran)

Bob Eckstein is an award-winning illustrator and writer, New Yorker cartoonist, snowman expert and author of the New York Times bestseller, Footnotes from the World’s Greatest Bookstores. Globe Pequot is coming out with a new edition of his holiday classic, The History of the Snowman in 2018.