Alice Guy-Blaché (July 1, 1873 – March 24, 1968) was a pioneering filmmaker of the early days of cinema, and the first woman to direct a film. One of the first filmmakers to make a narrative film, she was the only known female filmmaker in the world from 1896 to 1906.

Guy-Blaché directed, produced, or supervised about a thousand films, many of them short. When she died in 1968, many of her accomplishments had been erased from male-dominated film history books, but recent years have seen a revival of interest in her life and work.

Alice Ida Antoinette Guy was born in Paris to a Chilean father, Emile Guy, and a French mother, Marie Clotilde Franceline Aubert. The Guy family made their home in Santiago, Chile, where Alice’s four siblings were born and where Emile ran a bookshop and publishing company.

A smallpox epidemic in 1872 compelled the family to emigrate to France, where Alice was born the following year. When her parents returned to Chile soon after her birth, Alice was left in the care of her grandmother in Switzerland.

At the age of three, Alice returned to Chile. She spent the next two years with her family in Santiago before returning to France. She attended school at Veyrier, and later, went to a convent school at Ferney with her sister Louise.

In 1891, when Alice was nearly eighteen, her father died of unknown causes. Her mother struggled to get a job, and Alice trained as a typist and stenographer to help support her family. Her first job was at a varnish factory, and in 1894 she began working as a secretary at the Comptoir Général de la Photographie, owned first by Felix-Max Richard and then by Léon Gaumont.

The company manufactured cameras, and after Gaumont took over in 1895 (and changed the company name to L. Gaumont et Cie) it became one of the leading names in the relatively new motion-picture industry in France. It was the start of what would become, for Alice, a lifelong passion and successful career. 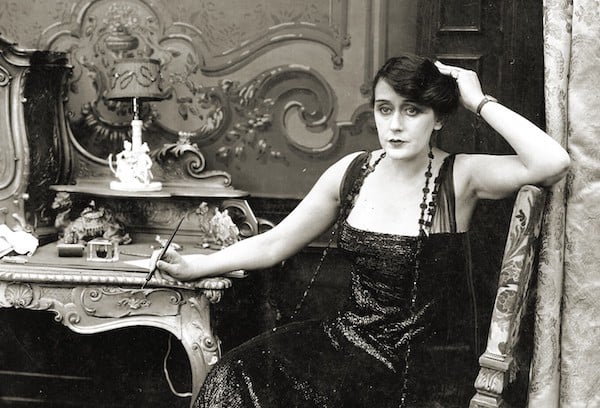 A new vision for film making

During her first months at the company, Alice became familiar with clients, marketing strategies, and the stock of cameras the company sold. She became acquainted with the short films that were made to demonstrate the cameras to clients and met other pioneers in the film business such as Auguste and Louis Lumière.

Together with Gaumont, she attended the “surprise” Lumière event in March 1895, in which the Lumière brothers demonstrated the first use of film projection. The film was simple — a shaky scene of workmen leaving the Lumière factory — but Alice was struck by the possibilities that projection offered and the opportunities it presented for incorporating narrative storytelling into film.

With characteristic bravado, she asked Gaumont for permission to make her own film. He considered it something of a “girlish thing” to do, but he allowed her the use of a company studio and camera on the condition that her secretarial work didn’t suffer.

Alice continued to effectively run the office while producing and directing the world’s first narrative film, only a few minutes long, and a July newspaper of that year describes the result as a “chaste fiction of children born under the cabbages in a wonderfully framed chromo landscape.” The film is unfortunately now lost, although later films made by Alice with the same title, La Fée aux Choux, did survive, and managed to confuse film historians for some time.

In 1912, recalling this first instance of narrative fiction in film, Alice said that, “Before very long, every moving picture house in the country was turning out stories instead of spectacles and plots instead of panoramas.” 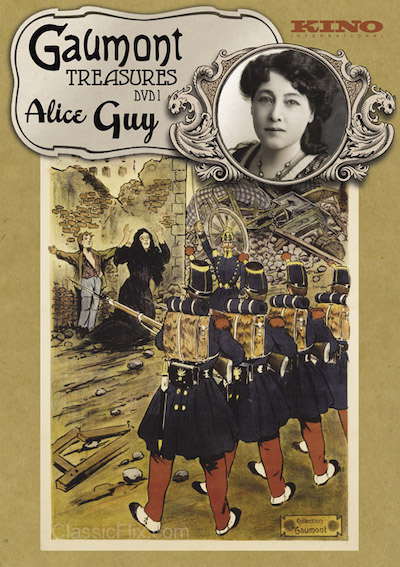 A woman in a man’s world

From 1896 to 1906, Alice worked as Gaumont’s head of production. In those ten years she produced hundreds of films and created an effective studio system years before Hollywood did so. She systematically developed narrative filmmaking and pioneered several techniques. These included the use of audio recordings in conjunction with film, using double exposure, masking techniques, hand coloring of film, and running a film backwards.

But while other pioneers like the Lumière brothers and George Méliès received huge accolades for technical advances during this period, Alice received little attention.

She was quite aware of the challenges faced by women in film, writing that: “My youth, my inexperience, my sex all conspired against me.” Later, in a 1914 edition of The Moving Picture World journal, she openly criticized the systemic eradication of women’s achievements, particularly in the field of filmmaking:

“There is nothing connected with the staging of a motion picture that a woman cannot do as easily as a man, and there is no reason she cannot master every technicality of the art … In the arts of acting, painting, music, and literature women have long held their place among the most successful workers, and when it is considered how vitally these arts enter into the production of motion pictures one wonders why the names of scores of women are not found among the most successful creators of photodrama offerings.”

The formation of Solax

In 1907, Alice married Herbert Blaché, a British-born filmmaker and screenwriter who was appointed as production manager for Gaumont in the U.S. The move across the Atlantic was initially not a happy one for Alice, who described the arrival in New York:

“The view of Liberty lighting the world, the sight of skyscrapers in the fog could not chase my sadness. I saw all that through tears which I tried in vain to stop. All around me I heard exclamations of enthusiasm in a language of which I understood not one word.”

Alice and Herbert left Gaumont and set up on their own studio in 1910. The Solax Company had its first base in Flushing, New York, and in 1912 moved to Fort Lee, New Jersey, then a center of American filmmaking. The studio in Fort Lee was state of the art, with prop rooms, dressing rooms, carpentry workshops, five stage sets, darkrooms, labs, and projection rooms.

Herbert worked as production manager and cinematographer, while Alice was the artistic director. She also directed many of Solax’s releases. She scouted for locations (by car or on horseback), supervised other directors, and managed a company of adult and child actors along with several animals — including lions, rats, and a six hundred-pound tiger named Princess. On the wall of the studio, she hung a sign that said, “Be Natural.”

Within two years, Solax had become the largest pre-Hollywood studio in America. One of their most famous films, A Fool and His Money (1912), was the first to use an all-Black cast. There were many other films that could now be considered activist and feminist in subtle ways, though Alice herself didn’t consider them as such.

She was more focused on the psychology of character and, when money allowed, successfully made the transition to longer, more complex narrative films in which these could be explored in more depth. The studio continued to turn out films of all kinds, from romances to action films to Western-style shorts.

As time went on, though, competition from Hollywood increased and financial difficulties mounted. Technology was changing rapidly, and costs were rising. Often, the money needed to keep up to date simply wasn’t enough; the outbreak of the World War in 1914 also took its toll.

The end of a dream

Eventually Alice and Herbert divorced. Their professional partnership didn’t survive either. The rapid emergence of Hollywood after the war forced Solax out of business, and Herbert left to work in California. After surviving a severe bout of what was called the Spanish flu in 1918, Alice directed her last film in 1919.

In 1921, she was forced to auction her film studio in bankruptcy. Alice returned to France in 1922, where she had no luck in finding film work and turned to writing articles and children’s stories instead.

In the late 1940s Alice wrote her autobiography, concerned that she was being erased from much of the film history she had helped to create. It was first published in French (1976) and translated into English a decade later. She also made exhaustive lists of her films — many of them unavailable and presumed lost — hoping to be able to reclaim credit for the pioneering work that went into them.

Some of her efforts paid off when in 1958 she was awarded the French Légion d’Honneur, but she remained ambivalent. She wrote of her life: “Is it a failure; is it a success? I don’t know.”

Alice never remarried and returned to the US in 1964 to live with her daughter Simone in New Jersey. She died at the age of 94 on March 24, 1968, in a nursing home. She is buried at Maryrest Cemetery, Wayne, New Jersey. In 2012 the Fort Lee Film Commission installed a new gravestone, replacing the old one that simply stated her name and dates of birth and death with one that also proclaimed her as the “first woman motion picture director.” It also carries the Solax company logo, an image of the rising sun.

Alice Guy-Blaché has been the subject of something of a revival after a 2018 documentary film, Be Natural: The Untold Story of Alice Guy-Blaché, directed by Pamela B. Green and narrated by Jodie Foster. Many of her surviving films have since been restored and preserved, and Pamela B. Green is developing a feature biopic about her life.