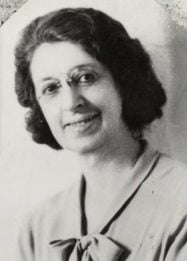 Marjory Stoneman Douglas (1890-1998) was an American writer and environmentalist who famously fought to protect the Florida Everglades, and also used her talents to advocate for women’s rights and racial justice in Miami and beyond. Here you’ll discover 10 fascinating facts about Marjory Stoneman Douglas, whose multifaceted accomplishments shouldn’t be forgotten.

Marjory’s long life was full of adventure, heartbreak, loss, discovery, and – ultimately – impact on the health and preservation of the wetlands critical to South Florida’s survival.

This unconventional woman helped shape the future of South Florida at a time when Miami was barely more than a frontier town and the “swamp” to the west of it was considered there for the taking by developers, speculators, and agricultural industrialists.

Marjory’s most notable work, The Everglades: River of Grass (1947), startled readers into an awareness of the beautiful and fragile intricacies of that wetlands’ ecosystem and warned of the dangers of not taking action to protect the Everglades in its “eleventh hour.”

Born on April 7, 1890 in Minneapolis, Minnesota, Marjory Stoneman Douglas spent her childhood years in Providence, Rhode Island and Taunton, Massachusetts. She graduated from Wellesley College in 1912 and was briefly married before moving to Miami, Florida in 1915.

Marjory had no siblings, nor direct descendants, but her legacy lives on through the richness and lasting influence of her work. 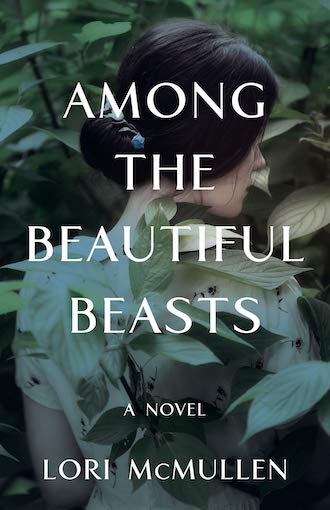 From the time she was six years old until she was twenty-five, Marjory didn’t see her father. As a young child, Marjory was very close with her father, Frank Stoneman. He encouraged her love of stories and read books to Marjory every night before bed. When Marjory was six years old, her mother, Lillian Trefethen Stoneman, experienced a mental health crisis and became convinced that Frank was trying to steal Marjory from her.

With the belief that she was protecting her child, Lillian took Marjory from the home they shared with Frank and moved to her own parents’ home in Taunton, Massachusetts. Lillian and her family would not let Marjory see Frank or have any contact with him, though Marjory desperately wanted to do so.

By the time Marjory was old enough to pursue a relationship with her father on her own, she had lost track of his whereabouts and did not know how to find him. It was Frank’s persistence and concern for Marjory that ultimately led to their reunion in 1915.

Marjory was briefly married to a criminal. Soon after graduating from Wellesley, Marjory met Kenneth Douglas through an acquaintance in Newark, New Jersey. Although Marjory knew little about Kenneth, other than the fact that he was at least thirty years older than her, the pair married within three months of meeting and settled in Newark.

Not long after, Kenneth was arrested for what he claimed was a minor offense, though he pled guilty and served six months in the Caldwell Penitentiary for the crime. Marjory stayed married to Kenneth during his incarceration but grew wary of the relationship when Kenneth’s criminal activities continued after his release from prison. 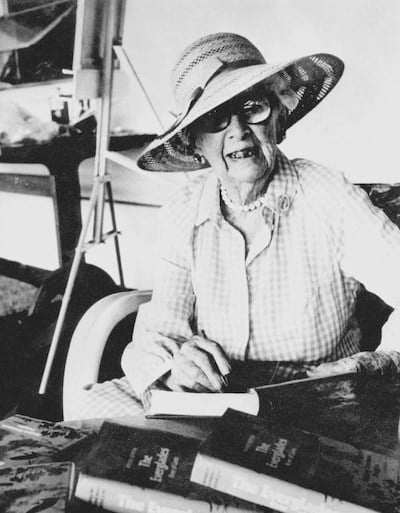 When society news was slow in the summer, she supplemented her work by writing general news articles and eventually became an assistant editor with her own column called “The Galley,” which gave her a platform for sharing her views on local and national issues.

A nervous breakdown almost killed her. In the late 1920s, Marjory experienced a second nervous breakdown. As with her first breakdown, in 1924, she found herself outside in the middle of the night, but this second time, she wore only her dressing gown and screamed so uncontrollably that the neighbors alerted her father.

The doctor who treated Marjory that night prescribed the wrong medication, and she nearly died from complications. A different doctor, who specialized in nervous conditions, was brought in to help Marjory recover, and he counseled her to reduce the stress she put on herself in order to prevent further breakdowns. As Marjory improved, she discovered the healing power of writing short stories.

Marjory built her house in Coconut Grove story by story. In 1924, Marjory began construction on a small cottage in the Coconut Grove area of Miami. She loved this part of the city because it was full of lush vegetation and interesting people and was not far from the waters of Biscayne Bay. This was where she wanted to build a small place of her own.

When construction costs exceeded the amount she’d borrowed, Marjory developed a system of talking to the builder each Saturday and telling him whether she had sold a short story to a magazine, which would mean work on the house could continue.

The cottage was completed in the fall of 1926, just before the great unnamed hurricane hit Miami. Marjory’s beloved home survived the storm with minimal damage, and for the rest of her life, she lived in the little cottage that her stories had built.

Women’s rights and racial justice were also deeply important to Marjory. Although Marjory is best known for her environmental activism, she also fervently supported other progressive causes. From the time she was in college, Marjory was involved in the women’s suffrage movement, a passion that eventually led her to argue, in 1916, before the Florida legislature in favor of giving women the right to vote.

Though her appearance at the capitol was ineffective and Florida remained one of the last states to ratify the 19th Amendment, Marjory found value in working with outspoken women and developed an interest in public advocacy.

She was also one of the first people in Miami to speak out against the deplorable and unequal living conditions in the city’s Black neighborhoods, which, among other problems, had no sewers or water mains.

Her advocacy in this area contributed to the passing of a referendum requiring all houses in Dade County to have indoor plumbing and the establishment of a fund to help Black homeowners borrow money to build bathrooms. 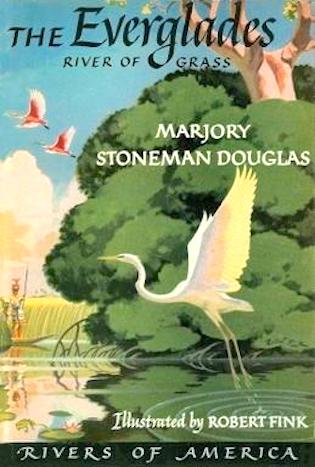 Marjory never planned on writing The Everglades: River of Grass. This book turned out to be her most important written work. Marjory was sixth months into writing a novel when her friend, the editor of a series of books about rivers, asked her to write a book about the Miami River. She responded that the Miami River was “only about an inch long,” and asked if she could look into whether the river was connected to the Everglades instead.

Marjory, who at that point had only a very basic understanding of the Florida wetlands, learned through research that that the movement of water from Lake Okeechobee south to the Ten Thousand Islands was flanked on either side by ridges that could be considered banks, which meant that the Everglades fit the technical definition of a river.

She then coined the phrase “river of grass,” which fundamentally changed the public’s understanding of the ecosystem and became the title of the book that forever linked Marjory Stoneman Douglas to that land.

Marjory lived to be 108. Much of Marjory’s most significant work took place in her later years, and as she aged, she embraced — and even relished — growing older. She felt that, with fewer responsibilities, old age allowed more freedom and time for contemplation than middle age did, and she counseled older people to remain interested in a variety of things so that they wouldn’t bore others.

Marjory’s philosophy on longevity is best reflected by this statement from her autobiography: “I believe life should be lived so vividly and so intensely that thoughts of another life, or of a longer life, are not necessary.”

The citation for this award read, in part, “An extraordinary woman who has devoted her long life to protecting the fragile ecosystem of the Everglades, and to the cause of equal rights for all Americans.” Marjory donated the medal to her alma mater, Wellesley College. 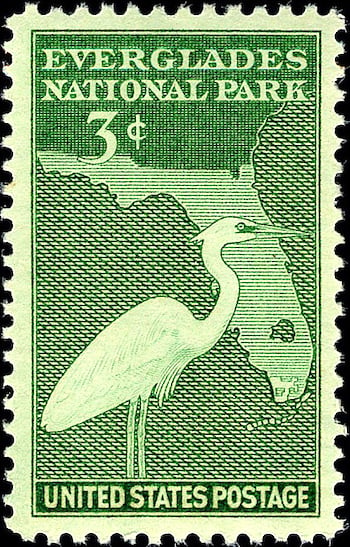 Marjory didn’t actually like to spend time in the Everglades. In her autobiography, Marjory states that “To be a friend of the Everglades is not necessarily to spend time wandering around out there. It’s too buggy, too wet, too generally inhospitable.”

Marjory’s recognition of the fundamental importance of the Everglades, paired with her acknowledgment of the realities of spending time there, communicated to the broader public that the ecosystem is worth saving, even if people have no interest in visiting the place themselves.

Contributed by Lori McMullen. Lori grew up in unincorporated Dade County, outside of Miami. Growing up, her family took an annual trip to the west coast of Florida. McMullen was inspired by the scenic drive along Route 41, a two-lane, pot-hole ridden stretch of road that bisected Everglades National Park and Big Cypress National Preserve. South Florida found its way into her heart and into her writing, even after she left Miami to attend Dartmouth College and Harvard Law School. McMullen currently lives with her husband and three daughters in Chicago. Her short stories have been featured in the Tampa Review and Slush Pile magazine. “Among the Beautiful Beasts” (2021) is her first novel. For more information, visit Lori McMullen.