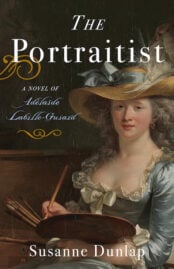 Susanne Dunlap, author of the historical novel The Portraitist: A Novel of Adélaïde Labille-Guiard (She Writes Press, 2022) presents ten fascinating facts about one of the two most important French female artists of the period before, during, and after the French Revolution.

Adélaïde Labille-Guiard is ready to draw the line between art and politics in The Portraitist. Award-winning author Susanne Dunlap paints a historical retelling of real-life Adélaïe Labille-Guiard, a female portraitist and painter, and her earnest battle to win recognition as an artist in 18th-century Paris amidst the French Revolution.

Paris, 1774. After her separation from her abusive husband, Adélaïde Labille-Guiard is at last free to pursue her dream of becoming the premier woman portraitist in Paris. Free, that is, until she discovers at her first public exhibition that another woman artist is poised to claim that role — and she has more training and better connections in the tightly controlled art world.

As her rival gains lucrative portrait commissions and an appointment as portraitist to Queen Marie Antoinette, Adélaïde continues to struggle, until at last she earns a royal appointment of her own, and, in 1789, receives a massive commission from a member of the royal family.

But the timing couldn’t be worse. Adélaïde’s world is turned upside down by political chaos and revolution. With danger around every corner of her beloved Paris, she must find a way to survive and adjust to the new order, starting all over again to carve out a life and a career—and stay alive in the process.

The Portraitist is based on the true story of one woman artist’s fight to take her rightful place in a man’s world — and the decisions she makes that lead her ultimately to the kind of fulfillment she never expected.

Adélaïde Labille-Guiard began her career in a world where royal patronage was the height of accomplishment and ended it after a bloody revolution and a new political system that set women’s rights and autonomy back about a century.

Liberté, égalité, fraternité—brotherhood—men ended up with all the privileges in the Napoleonic code. Worth noting — there’s no actual French word for sisterhood.

Nonetheless, Labille-Guiard was remarkable for what she did achieve, and her artworks can be found in museums and private collections all over the world. So why is she so little known?

She didn’t come from an artistic family. Adélaïde’s principal rival, Elisabeth-Louise Vigée Le Brun, was taught to draw and paint by her artist father, her godfather was the artist Gabriel Doyen, and she was surrounded by the best artists of the day.

By contrast, almost nothing is known about Adélaïde’s early training. Her father was a modiste who owned a fashion boutique in Paris called À la Toilette. Interesting tidbit: before Madame du Barry became Louis XV’s official mistress she was a shop girl by the name of Jeanne Bécu in that boutique.

Adélaïde was one of two surviving children of eight; her mother died when she was 17. It’s unlikely that her sickly mother took the time to teach her how to draw. And there’s little information about her schooling either.

It’s possible that—like her rival Elisabeth—she was sent to a convent school for some of her education. But that’s pure conjecture. In any case, she somehow acquired the education she needed, although one biographer laments that she wasn’t educated enough. 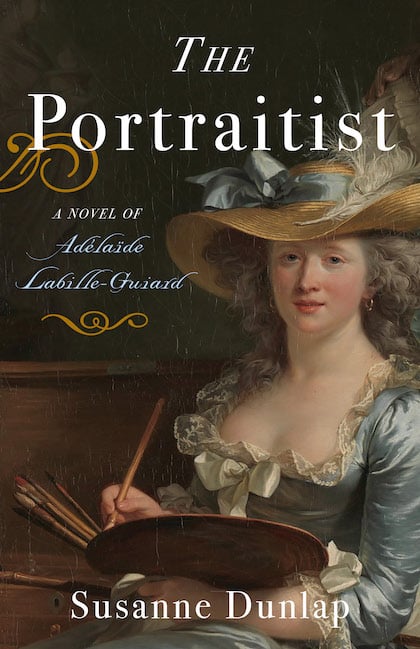 She married at the age of 19 (and was legally separated 8 years later). Divorce was illegal in Catholic Ancien Régime France. Adélaïde couldn’t get a divorce until after the laws changed in 1793, twelve years later.

She took up with François-André Vincent, a history painter, after becoming his student in 1776. Although her divorce came through soon after the Revolution, they didn’t marry until 1800.

There’s no evidence today that explains why she and André didn’t marry as soon as they were able. But it could have something to do with the fact that once they married, she relinquished the name of Labille-Guiard—the name associated with her artistic career—and became known as Madame Vincent.

Adélaïde started out painting miniatures. Painting miniatures was seen as a genteel occupation for girls and women in the 18th century, and they were generally painted with watercolors—inexpensive, easily cleaned up. But Adélaïde clearly didn’t approach the practice of art as a pretty pastime.

We know that she studied the painting of miniature watercolors with François-Élie Vincent, a member of the Académie Royale, who just happened to be the father of Adélaïde’s eventual lover and husband. She also studied pastels with Maurice Quentin de la Tour, the most famous pastellist of the time.

Access to training in the technique and art of painting was a significant hurdle for women. The Louvre housed the École des Beaux Arts, but those classes were closed to women, so the only recourse was individual tutelage.

Without an artist family member or connections, Adélaïde must have been determined and passionate to have broken into the insular, sexist field.

Adélaïde and her rival dogged each other’s steps throughout their careers. Obviously, the opportunities for top-notch women artists were extremely limited. Hardly surprising, then, that these two would find each other competing for the same or similar achievements.

The parallels are remarkable nonetheless: They both exhibited for the first time in the same salon, they both had royal patronage (although Elisabeth had the prize of being Marie Antoinette’s official portraitist), they were both elected to the Académie Royale in the same year and exhibited in the same salons every other year until 1789.

After that, Elisabeth was off painting in the courts of Europe, having fled and been declared an exile and enemy of the Republic because of her ties to the royal family.

Unlike her rival, Adélaïde became a highly respected teacher and was much in demand. Her studio before the Revolution consisted of nine talented women, her nine “muses,” she called them. They were a consistent source of income for her, and one of them—Marie-Gabrielle Capet—not only became a close friend, but Adélaïde and André adopted her after the Revolution so she could inherit their estates. 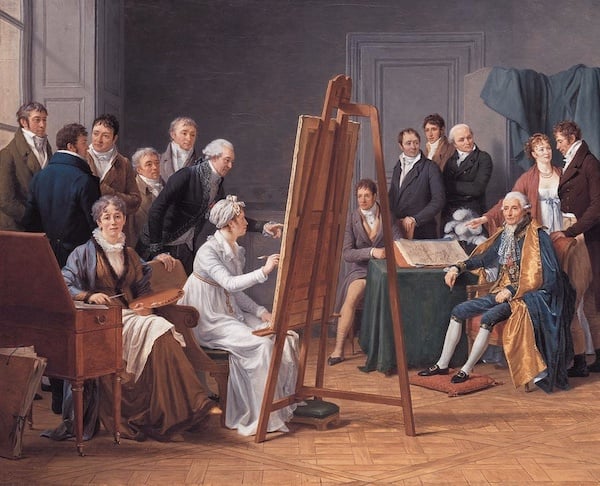 After years of trying, Adélaïde became the first woman to be awarded a studio and accommodations in the Louvre. The Louvre was neither a museum nor a royal residence at that time. It was instead a center of art and creativity, and free lodging was given to members of the Académie who requested it. That is, if they were men.

Adélaïde struggled financially and lobbied for those free accommodations before, during, and after the Revolution. Her first attempt in 1787 was thwarted by the conservative Comte d’Angiviller, controller of all things artistic in France, who claimed that allowing women to come into the Louvre to study would be a corrupting influence.

She finally succeeded in 1795 and became more famous as a teacher than an artist.

Adélaïde was never paid for her biggest commission: a massive painting for the Comte de Provence. Louis XVI’s younger brother hired Adélaïde to paint a 17 x 19-foot picture to hang in the École Militaire.

Since payment always came upon completion, Adélaïde had to fork out her own funds to purchase the expensive materials—the finest canvas from the Low Countries to be stitched together for such a huge painting, masses of pigments and brushes, scaffolding, gesso, and so on.

Mesdames (the king’s aunts, who were Adélaïde’s royal patrons) secured studio space for her in the disused Bibliothèque du Roi, since her own studio was nowhere large enough to accommodate a project of that size.

She was supposed to get thirty-thousand Livres, or about $18,000 in today’s currency—bearing in mind that this amount had a great deal more purchasing power then that it has today (the average laborer earned about $30 a year).

However, instead of a big payday, Adélaïde ended by losing 8,000 livres of her own money, about $5,000. The ultimate irony is that all that’s left of this mammoth painting is an oil sketch.

Adélaïde painted a portrait of Maximilien Robespierre. Before the dark days of the Terror, Adélaïde made an effort to prove her loyalty to the Republic—despite her history of royal patronage—by painting portraits of all the delegates to the national convention, free. At the time, that included Robespierre.

His portrait has been lost along with all the others, which were destroyed during the worst excesses of the Terror. In fact, many of Adélaïde’s paintings and pastels met the same fate, which is one reason why there are so many fewer works by her in museums today than by Elisabeth Vigée Le Brun.

When André Vincent died, the paintings in his possession by his late wife were sold for mere pennies.  Adélaïde died in 1803 at the age of 54, cause unknown, but she had likely been ill for a while. I have been unable to discover the location of her grave. However, her history-painter husband is interred in Père Lachaise cemetery in Paris, and his works sold for many thousands of Livres when he died.

Adélaïde’s work was underappreciated until late in the twentieth century. Her most famous painting, the self-portrait with her students Marie Gabrielle Capet and Marie Marguerite Carreaux de Rosemonde, is on display in the Metropolitan Museum of Art in New York. A detail of this work is on the cover of The Portraitist.

In the Catalogue Raisonné of her output by Anne Marie Passé, of the 143 paintings identified, over half are lost (labeled “unknown location”). Compare that to her rival’s output of somewhere around 600 works, and you can easily see why Adélaïde Labille-Guiard remains relatively unknown.

The Portraitist is my attempt to change that!

Her novel The Paris Affair won first place in its category in the CIBA Dante Rossetti awards for Young Adult Fiction. The Musician’s Daughter was a Junior Library Guild Selection and a Bank Street Children’s Book of the Year, and was nominated for the Utah Book Award and the Missouri Gateway Reader’s Prize. In the Shadow of the Lamp was an Eliot Rosewater Indiana High School Book Award nominee. Susanne earned her BA and an MA (musicology) from Smith College, and lives in Biddeford, ME, with her little dog Betty. You can find her at Susan-Dunlap.com.

See our Other Rad Voices category to explore more amazing women outside the literary realm.