Bluestockings — A Radical Bookstore Treasure in NYC’s Lower East Side 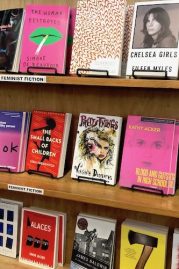 One of Manhattan’s few independent bookstores (and only feminist bookstore) is one of my favorite places, Bluestockings, located in the lively Lower East Side.

It’s more than than a repository for feminist thought; their shelves are filled with a beautifully curated selection of more than 6,000 titles on queer and gender studies, resistance/liberation, capitalism, climate, race, and a selection of rad children’s books. Also on the shelves are zines, journals, and poetry collections.

How about this tag line?  “Bluestockings tag line is 98% radical, 100 volunteer-powered, 2% glitter.” It’s a community-oriented venue, and to that end, the store hosts events nearly every evening, including readings, workshops, films, and performances. 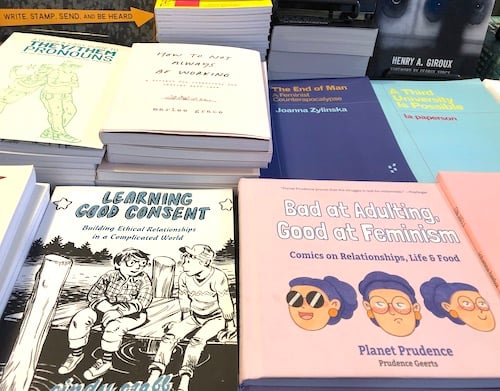 Bluestockings was founded in 1999 and is collectively owned and volunteer run. About the collective philosophy: “Bluestockings strives to empower our volunteer workers through non-hierarchy, cooperation, and collective-based decision making, providing an example of the society we are working toward.” 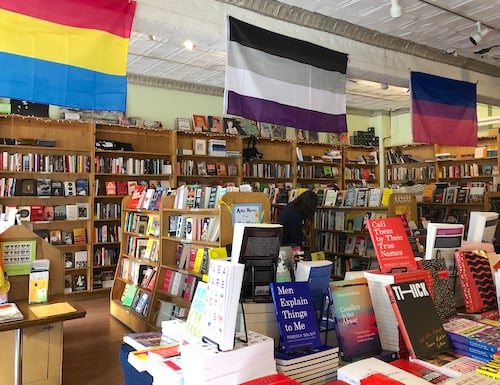 The first time I visited the store, I came to hear a reading from a recently-published book of sci-fi short stories by trans writers — Meanwhile, Elsewhere. And ever since, I’ve stopped to browse and buy, and to rest my weary feet, because there’s no better way to explore the Lower East Side. Bluestockings has a small café with organic, vegan, and fair trade coffee and goodies, and a few tables where you can sit and sip and read. 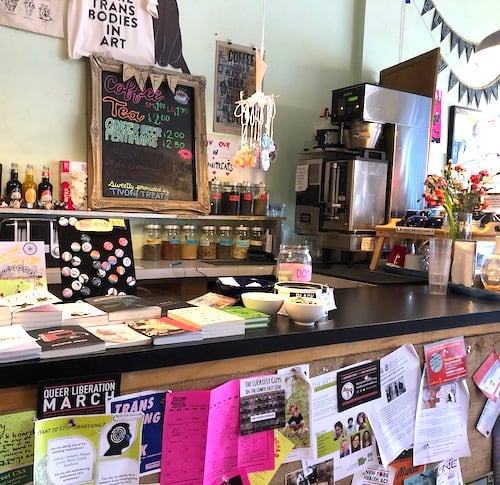 First of all, where did this name come from? It harks back to  The Blue Stockings Society, a political movement and literary discussion group that promoted female authorship and readership in mid-18th century England. Today, the definition of a bluestocking is “an intellectual or literary woman.” Yeah, I’ll wear that mantle proudly!

The store was founded as Bluestockings Women’s Bookstore by Kathryn Welsh, then only twenty-three. With a silent partner and a group of volunteers, the store opened in 1999.

Then a new and used bookstore, its selection focused on feminism and was collectively run. After 9/11, the business declined and was set to close down in 2003 when an angel named Brooke Lehman bought the business. She put together a six-person collective and the store was saved. The updated mission statement reads as follows:

Bluestockings is an independent bookstore, café, and activist resource center, located in the Lower East Side of Manhattan. Through words, art, food, activism, education, and community, we strive to create a space that welcomes and empowers all people.

We actively support movements that challenge hierarchy and all systems of oppression, including but not limited to patriarchy, heterosexism, the gender binary, white supremacy and classism, within society as well as our own movements.

We seek to make our space and resources available to such movements for meetings, events, and research. Additionally, we offer educational programming that promotes centered, strategic, and visionary thinking, towards the realization of a society that is infinitely creative, truly democratic, equitable, ecological, and free. 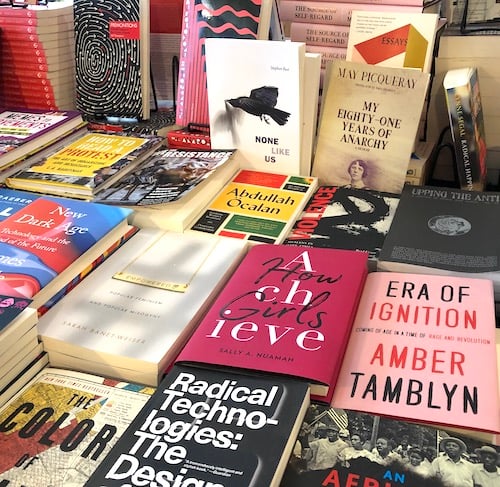 With Bluestockings’ rebirth, the vision was enlarged from feminism to a broader spectrum of progressive and activist books and activities. The store also nearly doubled its space. 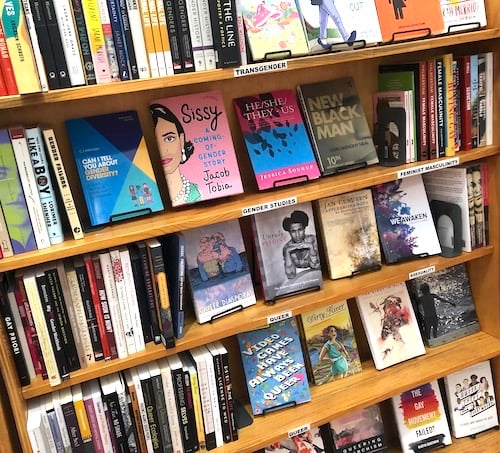