Glimpses into the Secret Diaries of Anne Lister (“Gentleman Jack”) 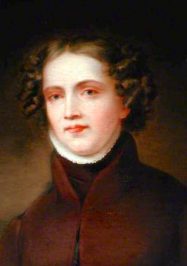 The fascinating and highly transgressive Englishwoman Anne Lister (1791 – 1840) of Shibden Hall in Yorkshire wasn’t a writer of published books, but was a committed diarist with a lot to write about. This introduction to the secret diaries of Anne Lister is excerpted from Killing the Angel: Early Transgressive British Woman Writers by Francis Booth ©2021, reprinted by permission.

Known in her local environs as “Gentleman Jack,” Lister’s enormous journals, only recently published, run to twenty six volumes and four million words – which possibly makes her in terms of word count one of the most prolific of woman writers in this book – but were never meant to be read by anyone.

These diaries, written primarily between 1817 and the mid-1820s, are partly in code to hide Lister’s lesbian sexuality. Once decoded, they are perfectly unambiguous, at least today.

I am resolved not to let my life pass without some private memorial that I may hereafter read, perhaps with a smile, when Time has frozen up the channel of those sentiments which flow so freely now. (19th February 1819)

I owe a good deal to this journal. By unburdening my mind on paper I feel, as it were, to get rid of it; it seems made over to a friend that hears it patiently, keeps it faithfully, and by never forgetting anything, is always ready to compare the past & present & thus to cheer & edify the future. (22nd June 1821)

Lister was born at an extraordinary time in history: her father served on the British side in the American War of Independence and was wounded at Lexington, returning unwilling to run the family business. But, as well as being the time of the American Revolution, this was the white heat of the British Industrial Revolution, which was led by the mills of Yorkshire.

She ran and expanded the family business like a true entrepreneur, taking advantage of the times, moving it from land owning and agriculture into the coal mining business, doing deals and signing contracts, employing and firing male workers just like any male boss.

She always dressed in black in a masculine way – though she did not actually dress as a man – and was known locally as “Gentleman Jack,” for reasons unspoken in public but understood by all. This is an early entry, dated 1816:

Ann & I lay awake last night till 4 in the morning. I let her into my penchant for the ladies. Expatiated on the nature of my feelings towards her & hers towards me. Told her that she ought not deceive herself as to the nature of my sentiments & the strictness of my intentions towards her.

I could feel the same in at least two more instances & named her sister, Eliza, as one, saying that I did not dislike her in my heart but rather admired her as a pretty girl. I asked Ann if she liked me the less for my candour, etc., etc. She said no, kissed me & proved by her manner she did not.

Although she wrote in code, and no one saw her diaries, Lister did not take any care to hide her long-term lesbian relationship with fellow landowning Yorkshire woman Ann Walker; quite the opposite. They were the first women to have a same-sex wedding ceremony, in York in 1834, even though it was not legally recognized.

Lister seems to have had quite a number of female lovers before settling down with Walker; she talked quite openly about her preferences with women who did not necessarily share them but were fascinated to understand. Anne seems to have believed completely that her activities were no sin – and that her tastes were shared by many women in her circle – but that those of homosexual men were.

She asked if I thought the thing was wrong – if it was forbidden in the bible & said she felt queer when she heard Sir Thomas Horton mentioned. I dexterously parried all these points – said Sir T. H.’s case was quite a different thing. That was positively forbidden & signally punished in the bible – that the other was certainly not named.

Besides, Sir T. H. was proved to be a perfect man by his having a child & it was infamous to be connected with both sexes – but that [there] were beings who were so unfortunate as to be not quite so perfect &, supposing they kept to one side [of] the question, was there no excuse for them.

It would be hard to deny them a gratification of this kind. I urged in my own defence the strength of natural feeling & instinct, for so I might call it, as I had always had the same turn from infancy. That it had been known to me, as it were, by inclination.

That I had never varied & no effort on my part had been able to counteract it. That the girls liked me & had always liked me. That I had never been refused by anyone & that, without attempting to account for the thing, I hoped it might, under such circumstances be excused. 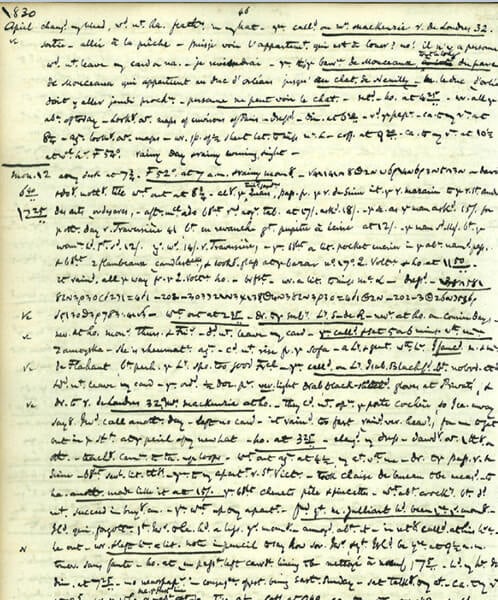 Although Lister’s diaries are mostly read today for their lesbian interest, they also give a fascinating account of day-to-day life in Yorkshire at that time.

You descend to Buxton down a very steep narrow road with an ill-fenced off precipice (the case in many other parts of the road) on your right. The appearance of the town is very singular – surrounded by rude, bleak, barren lime-stone mountains covered with lime-kilns.

The Crescent is situated so low & so hid from view, you hardly see the chimneys till you drive round the back & come into the area in front. We went to the Great hotel – had a sitting-room downstairs. C – preferred it on account of seeing the people as they walked along the Piazza.

Ordered dinner immediately and devoured a brace of Moor-game which were excellent but dear (6s) in consequence of the moors being so strictly preserved . . . Anne and Watson  have a double-bedded room – I a tolerably good single one opposite – 10s per week – up I know not how many flights of stairs.

All rather tired & went to bed early. Anne sat by my bedside & lay by me upon the bed till 3 in the morning – I teasing & behaving rather amorously to her. She would gladly have got into bed or done anything of the loving kind I asked her. 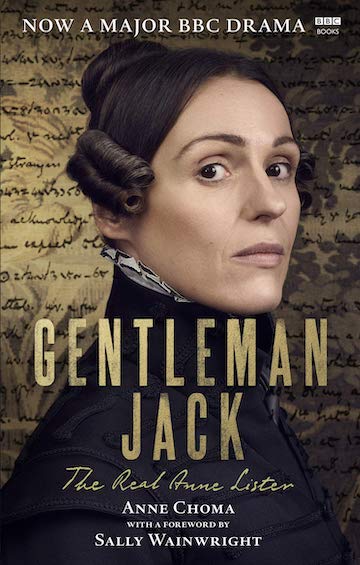 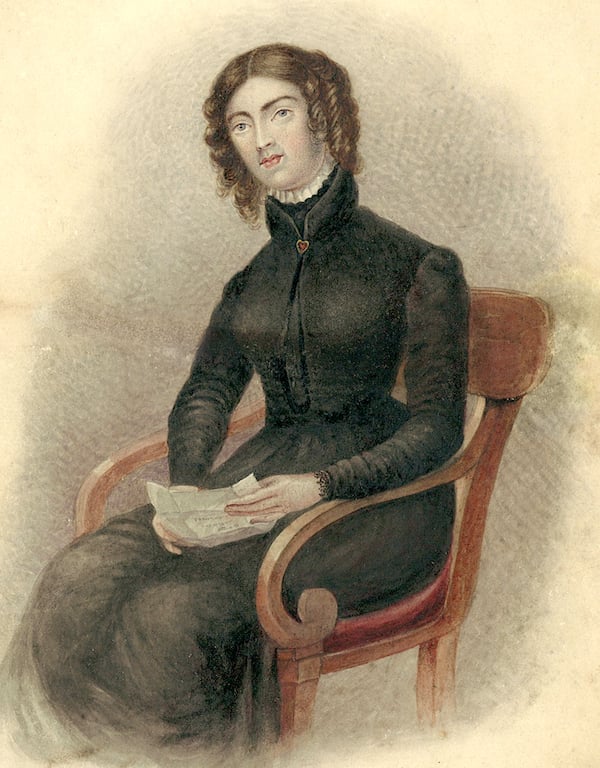 Image is courtesy of Wikimedia Commons, with this historic commentary:

Likely painted by a Mrs. Taylor on Wednesday 20 and Thursday November 1822, as described in Lister’s diary:

Wednesday 20 November [Halifax] At 12:40, too George in the gig & drove to Mrs Taylor’s. Sat for my likeness perhaps 1 1/4 hour. Very well satisfied with the sketch. There is something so very characteristic in the figure. Paid for it, 2 guineas … Neither Mrs Rawson nor Catherine thought it a good likeness. Found great fault with the mouth &, at first, with almost every part of the whole thing.

Thursday 21 November [Halifax] …Went to Mrs Taylor… sat nearly an hour during which she closed the mouth, improved the picture exceedingly & made it an admirable likeness… Got home at 2.25. The likeness struck me as so strong I could not help laughing. My aunt came up & laughed too, agreeing that the likeness was capital. Ditto my uncle. We are all satisfied, let others say what they may.”

Anne Lister reveals her true feelings nine months later: 30 August 1823 “Mrs Taylor’s sketch of me, like a person afraid of speaking. Too foolish looking. Could not bear it. Not at all characteristic.” 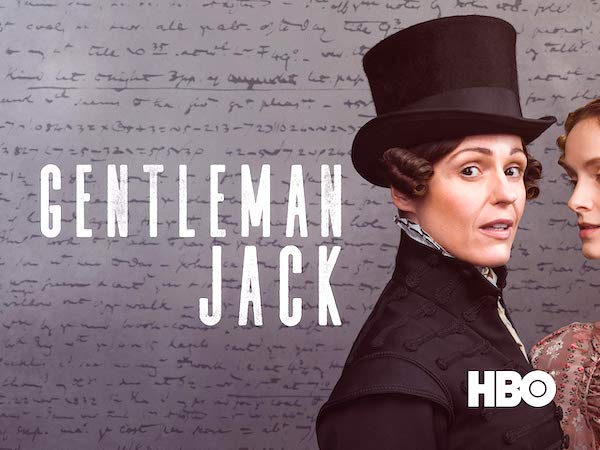 Gentleman Jack (the series) is available for streaming on Amazon*

Gentleman Jack, an 8-episode historical drama series, premiered in the U.S. in April, 2019, and in May 2019 in the U.K. Created and directed by Sally Wainright, the series was co-produced by BBC One and HBO. Suranne Jones stars as the landowner, industrialist, and prolific diarist Anne Lister.

The story is distilled from Lister’s multi-volume diaries that document her life of lesbian relationships in secret code. Nominated for multiple awards, this series was well received by critics and audiences alike. A second season, also based on Lister’s diaries, is in production. 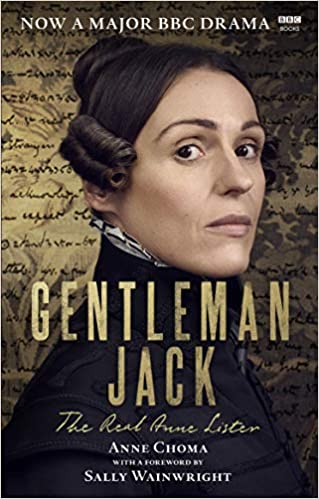 Gentleman Jack: The Real Anne Lister is available on bookshop.org and Amazon*

Gentleman Jack: The Real Anne Lister is the companion book to the series by Anne Choma and Sally Wainright. From the publisher:

Anne Lister was remarkable. Fearless, charismatic and determined to explore her lesbian sexuality, she forged her own path in a society that had no language to define her. She was a landowner, an industrialist and a prolific diarist, whose output has secured her legacy as one of the most fascinating figures of the 19th century.

Gentleman Jack: The Real Anne Lister follows Anne from her crumbling ancestral home in Yorkshire to the glittering courts of Denmark as she resolves to put past heartbreak behind her and find herself a wife. This book introduces the real Gentleman Jack, featuring unpublished journal extracts decrypted for the first time by series creator Sally Wainwright and writer Anne Choma.

Learn more about Anne Lister and the decoding of the secret diaries on the official website.