Did Little Women’s Jo March Become a Writer After All?

Jo March, the standout sister of Little Women (1868), was the idealized alter ego of her creator, Louisa May Alcott — both were tomboyish, with a bit of a temper. Like Louisa, Jo was completely dedicated to the pursuit of writing and the writer’s life. Or was she?  Certainly, that was her stated ambition in Little Women, in which we witness the birth of her first book.

I can’t think of another fictional character who inspired generations of real-life aspiring female writers. It’s almost easier to find writers who weren’t at least a little influenced by Jo, than those who were. Because so, so many young wordsmiths wanted to grown up to be like Jo.

Though Jo longed to be a writer more than anything, she also sought a happy medium between achieving independence and finding love, something that was expected of women of her time. That’s why she felt she had to turn down Laurie’s proposal (much to the chagrin of millions of readers).

So Jo marries the avuncular, middle-aged Professor Bhaer. And at the end of Little Women, having achieved a modicum of success by publishing a book, she inherits prickly Aunt March’s large home, Plumfield.

In an homage to Little Women on the occasion of its 150th anniversary in 2018, Sarah Lyall wrote in the New York Times:

“The book, especially in its creation of Jo — independent, unconventional, irreverent, impatient, devoted to her writing and proud of her ability to earn money at it — has been an inspiration and a model. Jo has always appealed to tomboys, rebels, and freethinkers, her passion for creativity providing aspiring writers with a glimpse of how to operate in the world.”

In the first sequel, Little Men, Jo and Professor Bhaer have established a school for boys in Plumfield. We scarcely recognize the Jo March of Little Women. In the text, she is called “Mrs. Jo” and “Mother Bhaer” (which in the audio version sounds just like “Mother Bear”). Indeed, Jo has become a kind, sensible mother figure to the school’s students. 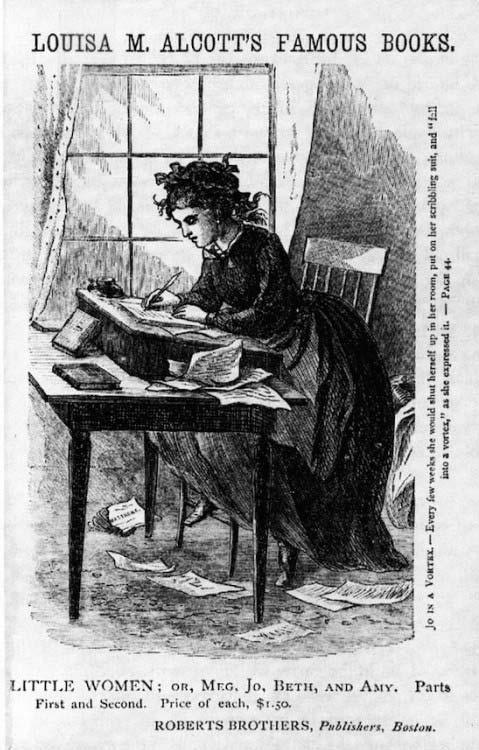 So did Jo March become a writer, or not?

But what of her writing career? Little Men barely hints at it, if at all. She and Friedrich Bhaer are now parents of two beloved boys, and appears satisfied with her lot. She seems happy, but what about all of the readers who wanted to be Jo March when we grew up? Have we been betrayed? Fortunately, no.

Jo did become a writer, and a rather rich and famous one at that. But we have to wait until the next sequel, Jo’s Boys, to find that out. Louisa didn’t do the best job of explaining just how a 19th-century wife, mother, and school-overseer would have woven a writing career in with all her other duties.

Louisa wrote for a living. She never married nor had children (though she did help raise her niece, after her sister, May Alcott Nieriker —the inspiration for Amy in Little Women — died prematurely). She didn’t run a school full of wayward boys, either. So her description of Jo’s writing success is kind of plunked down awkwardly into chapter three of Jo’s Boys, “Jo’s Last Scrape.”

Louisa didn’t bother to fictionalize this chapter too much; her description of Jo’s success and her own real-life renown match up quite well, other than the marriage, the children, and the school.

But at least she was wise enough to sense that depriving Jo of literary accomplishment would be a betrayal to readers who wished to emulate her. So let’s let Louisa take over from here, and tell what it was like when she — I mean Jo — achieved her dream of becoming a famous author.

The March family had enjoyed a great many surprises in the course of their varied career, but the greatest of all was when the Ugly Duckling turned out to be, not a swan, but a golden goose, whose literary eggs found such an unexpected market that in ten years Jo’s wildest and most cherished dream actually came true.

How or why it happened she never clearly understood, but all of a sudden she found herself famous in a small way, and, better still, with a snug little fortune in her pocket to clear away the obstacles of the present and assure the future of her boys.

It began during a bad year when everything went wrong at Plumfield; times were hard, the school dwindled, Jo overworked herself and had a long illness; Laurie and Amy were abroad, and the Bhaers too proud to ask help even of those as near and dear as this generous pair.

Confined to her room, Jo got desperate over the state of affairs, till she fell back upon the long-disused pen as the only thing she could do to help fill up the gaps in the income. A book for girls being wanted by a certain publisher, she hastily scribbled a little story describing a few scenes and adventures in the lives of herself and sisters, though boys were more in her line, and with very slight hopes of success sent it out to seek its fortune.

Things always went by contraries with Jo. Her first book, labored over for years, and launched full of the high hopes and ambitious dreams of youth, foundered on its voyage, though the wreck continued to float long afterward, to the profit of the publisher at least.

The hastily written story, sent away with no thought beyond the few dollars it might bring, sailed with a fair wind and a wise pilot at the helm into public favor, and came home heavily laden with an unexpected cargo of gold and glory.

A more astonished woman probably never existed than Josephine Bhaer when her little ship came into port with flags flying, cannon that had been silent before now booming gaily, and, better than all, many kind faces rejoicing with her, many friendly hands grasping hers with cordial congratulations.

After that it was plain sailing, and she merely had to load her ships and send them off on prosperous trips, to bring home stores of comfort for all she loved and labored for.

The fame she never did quite accept; for it takes very little fire to make a great deal of smoke nowadays, and notoriety is not real glory. The fortune she could not doubt, and gratefully received; though it was not half so large a one as a generous world reported it to be.

The tide having turned continued to rise, and floated the family comfortably into a snug harbor where the older members could rest secure from storms, and whence the younger ones could launch their boats for the voyage of life.

All manner of happiness, peace, and plenty came in those years to bless the patient waiters, hopeful workers, and devout believers in the wisdom and justice of Him who sends disappointment, poverty, and sorrow to try the love of human hearts and make success the sweeter when it comes. 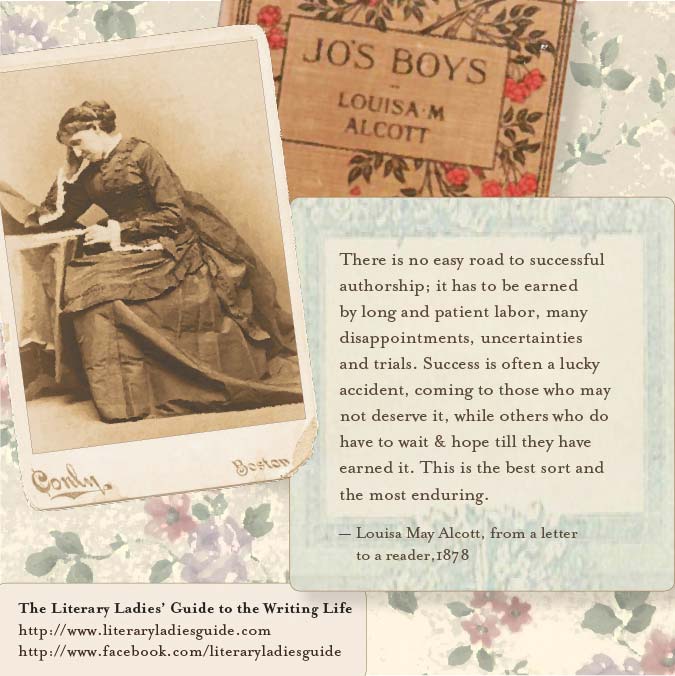 The world saw the prosperity, and kind souls rejoiced over the improved fortunes of the family; but the success Jo valued most, the happiness that nothing could change or take away, few knew much about.

It was the power of making her mother’s last years happy and serene; to see the burden of care laid down for ever, the weary hands at rest, the dear face untroubled by any anxiety, and the tender heart free to pour itself out in the wise charity which was its delight. As a girl, Jo’s favorite plan had been a room where Marmee could sit in peace and enjoy herself after her hard, heroic life.

Now the dream had become a happy fact, and Marmee sat in her pleasant chamber with every comfort and luxury about her, loving daughters to wait on her as infirmities increased, a faithful mate to lean upon, and grand-children to brighten the twilight of life with their dutiful affection.

A very precious time to all, for she rejoiced as only mothers can in the good fortunes of their children. She had lived to reap the harvest she sowed; had seen prayers answered, hopes blossom, good gifts bear fruit, peace and prosperity bless the home she had made; and then, like some brave, patient angel, whose work was done, turned her face heavenward, glad to rest.

This was the sweet and sacred side of the change; but it had its droll and thorny one, as all things have in this curious world of ours. After the first surprise, incredulity, and joy, which came to Jo, with the ingratitude of human nature, she soon tired of renown, and began to resent her loss of liberty.

For suddenly the admiring public took possession of her and all her affairs, past, present, and to come. Strangers demanded to look at her, question, advise, warn, congratulate, and drive her out of her wits by well-meant but very wearisome attentions.

If she declined to open her heart to them, they reproached her; if she refused to endow her pet charities, relieve private wants, or sympathize with every ill and trial known to humanity, she was called hard-hearted, selfish, and haughty; if she found it impossible to answer the piles of letters sent her, she was neglectful of her duty to the admiring public; and if she preferred the privacy of home to the pedestal upon which she was requested to pose, ‘the airs of literary people’ were freely criticized.

She did her best for the children, they being the public for whom she wrote, and labored stoutly to supply the demand always in the mouths of voracious youth—’More stories; more right away!’

Her family objected to this devotion at their expense, and her health suffered; but for a time she gratefully offered herself up on the altar of juvenile literature, feeling that she owed a good deal to the little friends in whose sight she had found favor after twenty years of effort …

Little Women and its sequels online

4 Responses to “Did Little Women’s Jo March Become a Writer After All?”