Brontë on the Brain: A Bicentennial and an Unsung Hero 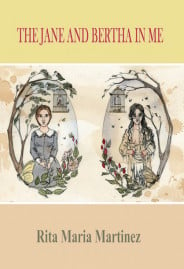 The bicentennial of Charlotte Brontë’s birth is approaching and celebrations and activities are already underway in the UK. Faithful pilgrims are flocking to Haworth to view the exhibition “Charlotte Great and Small” at the Brontë Parsonage Museum.

In the States, Brontëites have eagerly awaited the release of Claire Harmon’s biography Charlotte Brontë: A Fiery Heart and are probably reading and glutting their literary appetites right now.

With Brontë on the brain, I find myself revisiting the author’s most popular novel, Jane Eyre, which took the literary world by storm in 1847 and since then has remained in the public’s collective consciousness through gossip, reviews, published letters, graphic novels, film and stage adaptations, fan fiction, artwork, music, and a slew of reissues.

Why are readers so obsessed with Jane Eyre? Part of the answer lies in Brontë’s colorful assortment of male characters. Charlotte was good at writing men we love to hate.

Most male characters in Brontë’s Gothic tale are flawed specimens. Rochester manipulates the young governess by deceiving her and love interest Blanche Ingram; plus there’s the big secret he keeps under wraps for a long time—the lie that provides more than enough fodder for a Lifetime movie.  Jane’s cousin, St.  John Rivers—whose powers of persuasion border on cultish—is accustomed to micromanaging those around him.

The missionary convinces Jane to swap learning German for Hindustani and is very judgmental when she declines his offer of marriage and of sweating it out in India. Another man of the cloth, Brocklehurst, inspires dread in the hearts of almost everyone who crosses his path.

Discovering Lowood girls fashioning voodoo dolls in Brocklehurst’s image probably wouldn’t shock readers. Finally, let’s not forget young John Reed—a future serial killer in the making who decapitates birds in the yard and verbally and physically assaults Jane round the clock.  Whether a Jane Eyre fan or not, it’s easy to join the male-bashing bandwagon.

Most of Brontë’s men are given plenty of screen time in film adaptations. I have also devoted attention to them in The Jane and Bertha in Me, a collection of poems that includes individual works like Letter to Bertha; St. John Rivers Pops the Question; and Jane Responds When Asked, Why Edward?  But one male character is rarely acknowledged in fan fiction, literary criticism, and in discussions of Jane Eyre: Mr. Lloyd, the apothecary who tends to Jane after her epic meltdown in the red room.

A minor character, we know very little about Lloyd, except that Mrs. Reed uses his services when Jane or the servants are ill. Nursemaid Bessie tries to intervene and downplay Jane’s complaints of mistreatment when Lloyd arrives at Gateshead.

However, once Bessie exits the nursery, Lloyd gets the real scoop. Despite being an adult and an authority figure, he asks Jane a series of questions without making her feel uncomfortable or inferior. The medical man can easily opt for the bare minimum: sedate Jane, pat her head, say all will be fine, then disappear just as quickly as he arrives.

Instead of treating the orphan like a number, Lloyd tries to get at the heart of her concerns. Instead of merely following the letter of the law, he follows the spirit of the law. Our modern nurses, physician assistants, and doctors would do well to follow Lloyd’s example.

One film adaptation that does devote a substantial amount of time to the low-profile apothecary is the 1943 version starring Orson Welles and Joan Fontaine.

Though great liberties are taken with Lloyd’s dialogue, viewers can suspend their disbelief because, true to character, his kindness and goodwill are maintained. As a patient diagnosed with chronic daily headache (CDH), a genetic condition which wreaks havoc on the body and on one’s lifestyle, finding a capacitated and compassionate physician has been paramount to improving my quality of life.

CDH affects only four percent of the population and is often misunderstood and misdiagnosed, a fact corroborated in journalist Paula Kamen’s wonderful and informative memoir All in My Head: An Epic Quest to Cure an Unrelenting, Totally Unreasonable, and Only Slightly Enlightening Headache.

Many doctors mistakenly believe chronic headache patients are hypochondriacs or are mentally unhinged—especially primary care physicians who often set up roadblocks to effectively managing the disorder; many of these doctors are reticent to refer patients to neurologists or headache specialists. 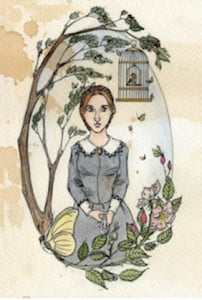 Charlotte Brontë may not have had CDH, but she did suffer from debilitating migraines, many of which, after reading her letters, I believe were weather-induced. Though migraine treatments were rather crude in Brontë’s time, she may have benefited from the advice of a wise and kind practitioner like Lloyd.

As a patient living with an “invisible illness” on a daily basis, the ultimate frustration is when one sits across from a trained professional who downplays one’s health concerns. Lloyd may have done the same when Jane confesses that Uncle Reed’s ghost haunts the red room. Instead he discusses the topic with delicacy and focuses on Jane’s living situation.

Upon his advice, Mrs. Reed sends her niece to Lowood—Jane’s ticket out of Gateshead. Though Lowood holds many terrors of its own and is far from being an idyllic environment, Jane ultimately does flourish as a student there. When Brocklehurst trash talks and humiliates Jane in front of classmates, she is eventually exonerated because Lloyd sets the record straight and vouches for her character.

One wishes the Brontë’s themselves had known a practitioner like Lloyd. If so, perhaps secretive Emily Brontë  would have accepted medical treatment upon becoming ill. Growing alarm over Emily’s health led Charlotte to eventually contact a specialist via correspondence.  Brother Branwell Brontë grappled with hallucinations and depression—and abused alcohol and laudanum.

In her biography, The Infernal World of Branwell Brontë, author Daphne du Maurier states that “It did not occur to Charlotte or any of the family that there was only one course to take, and that a consultation with the best medical opinion of the day was imperative if Branwell’s life and reason were to be saved.” However, the Brontës were concerned about Branwell’s health.

Readers discover “Dr. Wheelhouse of Haworth suggested abstention from alcohol and nothing more. The rapid loss of weight, the continuing cough, the appalling insomnia, were left to take their course.” Again, I believe a relationship with a practitioner like Lloyd may have helped the youngest Brontë sibling. Branwell did “dry out” at one point, but his sobriety was temporary.

Unfortunately, organizations and support groups like Alcoholics Anonymous and Narcotics Anonymous were not in existence, nor were rehab centers; however, at the very least, someone with an excellent bedside manner like Lloyd may have served as a sounding board for the perturbed Branwell who often felt lonely, isolated, and tormented. 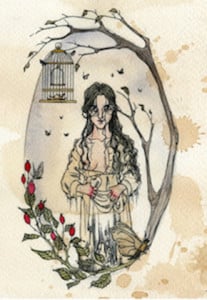 How can your head hurt for over two months if you do not have a tumor? they asked. They were as clueless as I was. Even worse, their incredulity was utterly upsetting. I did, however, encounter one kind physician at the university health clinic—a migraineur herself, this general practitioner started experiencing terrible headaches after menopause.

In a state of desperation, she once braved the outdoors during a hurricane to obtain painkillers from a neighbor. Finally, someone who believed me! Someone who didn’t think I was off my rocker. Someone who knew the pain was real. This  doctor stood by me.

She encouraged I battle it out with my insurance company and demand a referral to a specialist, the first step in regaining some sort of control and relief. I needed to obtain a referral for a neurologist from my crappy HMO regardless of how many times the powers that be slammed the door in my face.

I am grateful for this physician’s  counsel and for the spirit of perseverance she taught me—an essential part of surviving the ravages of CDH. Her brief intervention, like Lloyd’s in Jane’s life, came at a pivotal moment.

Through trial and error I did eventually find a compassionate and effective neurologist, a thought I keep present especially now since March has been designated as National Brain Health Month in the US.

In celebrating Charlotte Brontë’s bicentennial and literary legacy, I’ll also be celebrating the creation of a minor yet crucial character who makes the world a better place one patient at a time.

I’m due for surgery in about nine years. I’ll be receiving a next generation  neurostimulator implant—a device similar to a pacemaker that helps intercept pain messages and prevent headaches from forming.  After receiving my first implant two summers ago, I am happy to report that my headaches have declined in frequency by 75%, and my intake of painkillers has also declined drastically. Despite being “poor, obscure, plain and little,”

Charlotte Brontë’s literary heroine has taught me the importance of refusing to settle in any area of my life. Next time I undergo the knife, I will choose a doctor who has a little bit of Lloyd in her or him.

Rita Maria Martinez is a Cuban-American poet who lives in Miami, Florida. Her debut poetry collection, The Jane and Bertha in Me, was recently published by Aldrich Press, an imprint of Kelsay Books. Readers residing in the U.S. may obtain a signed and personalized copy of The Jane and Bertha in Me or may learn more about Martinez’s work at Come on Home.  Ask her a question on Godreads.com or Tweet her @CubanBronteite. lIlustrations in this post by Kate O’Keefe