The Poetry of Anne Bradstreet: An Analysis 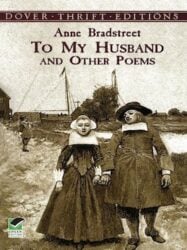 This concise analysis of the poetry of Anne Bradstreet is excerpted from Who Lived Here? A Baker’s Dozen of Historic New England Houses and Their Occupants by Marc Antony DeWolfe Howe, an eminent editor and writer of the late 19th and early 20th centuries. Anne Bradstreet (1612 – 1672) was the first writer in the American colonies to be published.

She rejected the prevailing notions of women’s inferiority. That opened her to criticism, not for her work itself, but that she dared to write and make her work public. It was considered unacceptable for women of her time to have a voice. She not only used hers effectively but pushed back at her critics.

In 1647, John Woodbridge, minister of North Andover, married to Anne Bradstreet’s sister, Mercy Dudley, went to England carrying with him a manuscript volume of his sister-in-law’s writings. There, without her knowledge, it was printed in 1650.

The book’s full title page would demand more space that is available here, so this is how it began and ended:

The
Tenth Muse
Lately Sprung up in America,

Severall Poems, compiled
with great variety of Wit
and Learning, full of delight.

By a Gentlewoman in these parts

This title page contained one further line that must be cited: “With divers other pleasant and serious Poems.” In this category, which should be extended to include the prose Meditations she wrote for her son Simon, the best of Anne Bradstreet is to be found, whether in the London 1650 volume, or in “The Second Edition, Corrected by the Author and enlarged by an Addition of several other Poems found amongst her Peers after her Death,” Boston, 1678.

Woodbridge’s Introduction to The Tenth Muse suggested that “the Reader should pass his sentence that it is the gift of women not only to speak most but to speak best.”

Introductory verses by others, including John Rogers, president of Harvard in the second edition, hailed Anne Bradstreet as both woman and poet. She herself made early assertions of feminism.

I am obnoxious to each carping tongue
Who says my hand a needle better fits
A Poet’s pen all scorn I should thus wrong,
For such despite they cast on female wits;
If what I do prove well, it won’t advance,
They’ll say ’tis stole’n or else it was by chance.

This is in the Prologue to her “Four Elements” and in the poem honoring Queen Elizabeth:

She hath wiped off th’ aspersion of her sex,
That women wisdom lack to play the Rex.

Nay Masculines, you have thus tax’d us long
But she, though dead, will vindicate our wrong.

Puritan as Anne Bradstreet may have been it would be quite a mistake to recall her as nothing more. Due allowance should be made for her brother in-law’s summary of “her gracious demeanour, her eminent parts, her pious conversation, her courteous disposition, her exact diligence in her place, her discreet managing of her family connections.” 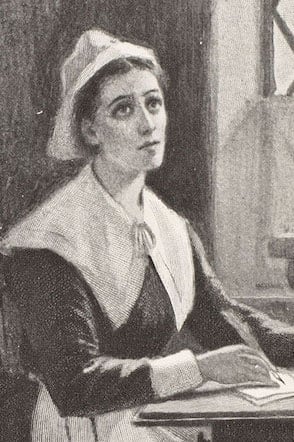 A clear and vigorous thinker

In her writings one may find at this late day direct evidence of clear and vigorous thinking, and of genuinely poetic expression.

Her prose Meditations written for her son Simon — seventy-seven in number, with four added in Latin — look back to Solomon and forward to Ben Franklin. Here is one of them:

“It is reported of the Peacock the priding himself and his gay colors, he ruffles them up; but spying his black feet, he’s soon lets fall his plumes, so that he glorys in his gifts and adornings, should look upon his Corruptions, and that will damn his high thoughts.” But it was in poetry rather than in proverbs that her real distinction lay.

Take, for example, “The Flesh and the Spirit,” ending with lines about the Celeste City in which the Spirit dwells — a rendering in telling verse of a familiar passage in the book of revelations.

Or look, still more attentively, at the long poem, “Contemplations,” which first saw the light in the second edition of her writings. Nature was here her theme — the woods, the river, all the outdoor objects to which she turned from her books. Chiefly of a high seriousness, it’s stanza’s held touches of light fancy — as here:

I heard the merry grasshopper then sing,
The black clad Cricket bear a second part,
They kept one tune, and plaid on the same string,
Seeming to glory in their little Art.

With Addison and Shelley still to come, she wrote this stanza”

When I behold the heavens as in their prime,
And then the earth (though old) still clad in green,
The stones and trees, insensible of time
Nor age nor wrinkle on their front are seen;
Is winter come, and greenness then do fade,
A spring returns, and they more youthful made
But Man grows old, lies down, remains where once
he’s laid.

And in conclusion this stanza, comparable with the best poetry of her own in later times, is found:

O Time, the fatal wrack of mortal things,
That draws oblivious curtains over Kings,
Their sumptuous monuments, men know them not,
Their names without a Record are forgot.
Their parts, their ports, their pomp’s all laid in th’ dust
Nor with nor gold, nor buildings scape time’s rust
But he whose name is grav’d in the white stone
Shall last and shine when all of these are gone. 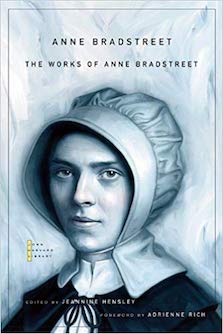 From such loftier strains as these, Anne Bradstreet could turned to domestic themes in the burning of her house, love for her children and, most of all, for her admirable husband.

Beginning in Massachusetts is one of the chosen Assistants in the government, Simon Bradstreet served the Colony in successive posts of responsibility … to the dignity of Deputy Governor and Governor.

What ever he may have been to the state he was all in all to that Tenth Muse, his wife. Her short poem beginning:

If ever two were one, then surely we,
If ever man were loved by wife, then thee;

Then while we live, in love let’s so persever,
That when we live no more, we may live ever,

Speaks timelessly for conjugal happiness. There are, besides, three letters in verse to her husband, “absent upon Publick employment.” The third of these has a special 17th-century flavor … and, with these lines, as if of Jacobean conceit:

Return my Dear, my joy, my only Love
Unto thy Hind, thy mullet, and thy Dove,
Who neither joyes in pasture, house, nor streams,
The substance gone, O me, these are but dreams,
Together at one Tree, oh let us brouze
And like two Turtles, roost within one house,
And like the Mullets in one River glide,
Let’s still remain but one, till death divide.
At home, abroad, and everywhere.

A lofty place among American poets

Anne Bradstreet was not the first, or the last, of poets needing to be stripped of some excess poetical baggage. In fact she had a good deal of it, but there is a residue which, quite apart from the unique circumstances of its origin should hot be permitted to perish. It was long before any other woman took such a place as hers among the poets of America. 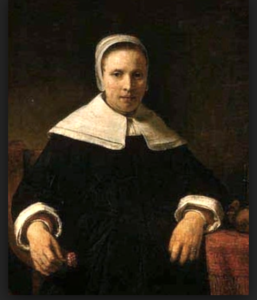