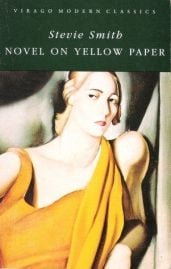 This analysis of Novel on Yellow Paper by Stevie Smith (1936) is excerpted from Amongst Those Left by Francis Booth. Reprinted by permission.

‘This book is the talking voice that runs on, and the thoughts come, the way I said, and the people come too, and come and go, to illustrate the thoughts, to point the moral, to adorn the tale.’

Born Florence Margaret Smith, in Kingston Upon Hull, England,  Stevie Smith (1902 – 1971) is now better known and loved as a poet than as a novelist. All her novels were written relatively early in her life and are all unconventional. Smith was brought up, along with her sister, by her feminist aunt Madge Spear, whom she called ‘The Lion Aunt’ and with whom she lived all her life.

“Dear Auntie Lion, I do so hope you will forgive what is written here. You are yourself like shining gold. When I think of what some women are like, I am full of humble gratitude and apprehension that I have you to live with.”

Smith lived a creative and intellectual life largely independent of men. She knew personally many artistic and creative women and corresponded with many others. However, she did not make a living from her writing and worked in the very male world of publishing; like Ann Quin a generation later she worked as a secretary, from 1923 to 1953.

Smith had been writing poetry for ten years when she first submitted her poems to an agent, who suggested she should write a novel instead; Novel on Yellow Paper (1936), was the result. After that she published her first volume of poetry, A Good Time Was Had By All (1937), which was followed by more poetry and two more novels. 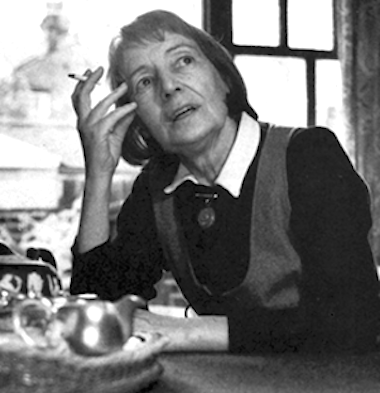 Smith’s three novels – Novel on Yellow Paper; or, Work It Out For Yourself, 1936; Over The Frontier, 1938; The Holiday 1949 – are all decidedly internalized and autobiographical: the world of externals only seems to exist through the narrator’s rather eccentric view of it and her flowing, rambling chatter, which seems to have no ordering principle other than that of the association of ideas.

After the last novel was published in 1949,  she concentrated on her poetry. Having left her secretarial job in 1953 she reviewed books, published sketches and read her poetry in public, becoming well-known especially for the poetry collection Not Waving But Drowning, published in 1957.

The narrator of the first two novels, Pompey Casmilus, is a thinly veiled version of Smith herself; in the first novel she talks entirely about herself, her opinions and her life at work and in her small social circle. Over The Frontier starts in similar vein but Pompey then goes to Germany and the novel (which was published just before the Second World War) turns into a parody of a certain kind of jingoistic thriller written by John Buchan and others. 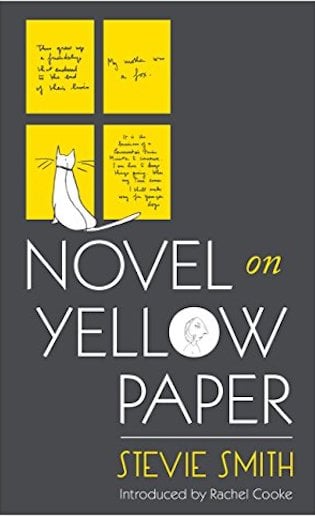 Whereas Novel on Yellow Paper had been concerned with anti-Semitism, Over the Frontier is concerned with German militarism. Smith’s third novel, The Holiday, published more than ten years later, is more conventional and though it has characters – the central figure Celia is in many ways like Smith herself – and a frustrated love story, it is mainly concerned with post-war Britain and its role in the world and many of the characters speak as if merely voicing Smith’s own views.

Novel on Yellow Paper is so titled because the narrator is said to be composing it on office paper while she is at work:

The narrator, who, like Smith herself, is a private secretary who lives with her aunt, makes it clear that this is going to be an experimental novel:

“But first, Reader, I will give you a word of warning. This is a foot-off-the-ground novel that came by the left hand. And the thoughts come and go and sometimes they do not quite come and I do not pursue them to embarrass them with formality to pursue them into a harsh captivity. And if you are a foot-on-the-ground person I make no bones to say that is how you will write and only how you will write. And if you are a foot-on-the-ground person, this book will be for you a desert of weariness and exasperation. So put it down. Leave it alone. It was a mistake you made to get this book. You could not know.”

Despite the apparent frivolity and lightness of tone of most of the book, Pompey (and therefore Smith) are well aware of world politics and have serious things to say, especially about German fascism. Pompey has been to Germany and stays in the house of Jewish friends in Berlin. ‘Oh how I felt that feeling of cruelty in Germany, and the sort of vicious cruelty that isn’t battle-cruelty, but doing people to death in lavatories.’

It is important to remember that this was at a time when the British government and monarchy still had full diplomatic relations with Germany and that the policy of appeasement would continue for several years.

No one had yet predicted the horrors of war or the Holocaust and, although a few committed writers like George Orwell, Christopher Caudwell and Ralph Fox were leaving to fight fascists in Spain just as Novel on Yellow Paper was being published, Smith’s political insight in this novel is far in advance of the great majority of the writers of the time.

But despite the seriousness of this message, the novel keeps its lightness and its constant reminders that it is indeed a novel, addressing the reader and talking about literary technique. Pompey discusses her friend Harriet who is a poet but wants to write a book about fashion. Harriet does not know how to keep the book to a reasonable length.

“But with me, I shall have no such difficulty. I shall know when to stop. And whatever I write then will be Volume Two.

But Harriet in her writing form has a very exact and precise sense of form. And that is a thing I am not able to come by. Reader, it is a fault.

People have said to me: If you must write, remember to write the sort of book the plain man in the street will read. It may not be a best seller – but it should maintain a good circulation.

About this I pondered for a long time and became distraut [sic]. Because I can write only as I can write only, and Does the road wind uphill all the way? Yes, to the very end. But brace up, chaps, there’s a 60,000 word limit.

Oh how irritated I am by this funny idea of keeping your feet on the ground. Spoken like an officer and a gentleman, Sir People. Spoken like a prig and a nincompoop.”

More about Novel on Yellow Paper