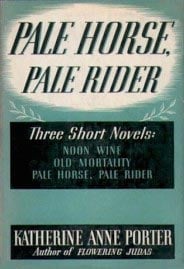 This introduction to Miranda Gay, a central character in of two of the three stories in Pale Horse, Pale Rider by Katherine Anne Porter (1939), is excerpted from Girls in Bloom: Coming of Age in the Mid-20th Century Woman’s Novel  by Francis Booth, reprinted by permission.

Katherine Anne Porter (1890-1980) is best known for her only novel, Ship of Fools, which she began writing in 1931 but only published in 1962. In addition to this magnum opus, she published only short stories, fewer than thirty, but which earned her a reputation as one of the twentieth century’s greatest stylists of short fiction.

Porter had a fascinating life: having been born in Texas, she married three husbands of various nationalities and lived in several countries, including Mexico, where many of her stories are set, and Bermuda where she began her stories about Miranda Gay, who is usually considered to be her alter ego and spokeswoman.

Pale Horse, Pale Rider (1937) consists of three of what Porter called short novels, though they are more like long short stories.

The first, ‘Old Mortality’ and the third, which is the title story, concern Miranda Gay; in the first we see her, very briefly, coming of age and in the third she is a young career woman working as a journalist during the First World War, falling in love with a young soldier and getting caught in the Spanish Flu epidemic.

Despite its brevity, ‘Old Mortality’ is in three parts – in the first Miranda is eight, in the second she is ten. In the third she is eighteen and has eloped from home. Also despite its brevity, the story has more insight into a young woman’s coming of age and her relationship to her family and the outside world than many full-length novels. The first part, which finishes in 1902, features Miranda and her older sister.

“Maria and Miranda, aged twelve and eight years, knew they were young, though they felt they had lived a long time. They had lived not only their own years; but their memories, it seemed to them, began years before they were born, in the lives of the grown-ups around them, old people above forty, most of them, who had a way of insisting that they too had been young once. It was hard to believe.

Miranda persisted through her childhood in believing, in spite of her smallness, thinness, a little snubby nose saddled with freckles, her speckled gray eyes and habitual tantrums, that by some miracle she would grow into a tall, cream-colored brunette, like Cousin Isabel; she decided always to wear a trailing white satin gown. Maria, born sensible, had no such illusions. ‘We are going to take after my Mamma’s family,’ she said. ‘It’s no use, we are. We’ll never be beautiful, we’ll always have freckles. And you,’ she told Miranda, ‘haven’t even a good disposition.’”

Cousin Isabel is a source of romantic wonder and an object of admiration for the two girls as is Aunt Amy, who ‘belonged to the world of poetry,’ whereas Cousin Eva, ‘shy and generous, straining her upper lip over to enormous teeth,’ was ‘a blot, no doubt about it, but the little girls felt she belonged to the everyday world of dull lessons to be learned, stiff shoes to be limbered up, scratchy flannels to be endured in cold weather, measles and disappointed expectations.’

Eva wears her mother’s old clothes and teaches Latin in a women’s school while she travels around making suffragist speeches, for which she later goes to jail.

Later, the two sisters, ‘who read as naturally and constantly as ponies cropped grass, and with much the same kind of pleasure,’ discover some ‘forbidden reading matter,’ gothic novels about ‘beautiful but unlucky maidens, who for mysterious reasons had been trapped by nuns and priests in dire collusion; they were then “immured” in convents.’ The word immured perfectly describes to them their situation.

‘It was the word Maria and Miranda had been needing all along to describe their condition at the Convent of the Rapture of Jesus, in New Orleans, where they spent the long winters trying to avoid an education.’ The convent is their home, ‘their familiar world of shining bare floors and insipid wholesome food and cold-water washing and regular prayers; their world of poverty, chastity and obedience, of early to bed and early to rise, of sharp little rules and tittle tattle.’

Her hope of being a beauty died hard, until the notion of being a jockey came suddenly and filled all her thoughts.’ The father is not sympathetic towards the girls: ‘“Nest of vipers,” he boasted, “perfect match of serpents teeth. Can’t do anything with ‘em.” He fluffed up Miranda’s hair, pretending to tousle it.’

The next time we see Miranda she is eighteen and has run away to be married, though we are told nothing about either the elopement or the husband. She meets Cousin Eva on a train taking them both to Aunt Amy’s funeral; Eva is now fully committed to the suffragist movement for which she has been to jail three times.

Miranda has not seen her father since she eloped and he does not welcome her with open arms, in fact he physically pushes her away when he sees her. The end of ‘Old Mortality’ is one of the best extended descriptions of a girl’s coming of age in all of the literature about female adolescence.

“‘Where are my own people and my own time?’ She resented, slowly and deeply and in profound silence, the presence of these aliens who lectured and admonished her, who loved her with bitterness and denied her the right to look at the world with her own eyes, who demanded that she accept their version of life and yet could not tell her the truth, not in the smallest thing. ‘I hate them both,’ her most inner and secret mind set plainly, ‘I will be free of them, I shall not even remember them…’

She did not want any more ties with this house, she was going to leave it, and she was not going back to her husband’s family either. She would have no more bonds that smothered her in love and hatred. She knew now why she had run away to marriage, and she knew that she was going to run away from marriage, and she was not going to stay in any place, with anyone, that threatened to forbid her making her own discoveries, that said ‘No’ to her…” 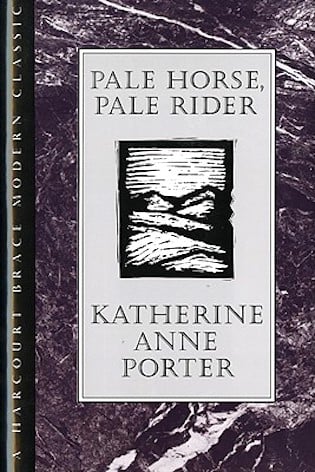