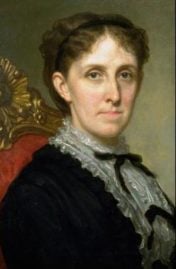 By the 1870s, Louisa May Alcott and her baby sister May had become close companions. Although quite different in temperament, both shared that burning ambition to become the artists they were meant to be – Louisa as a best-selling author, and May as an acclaimed painter, exhibiting at the Paris Salon.

In the 1970s Alcott scholar Sarah Elbert discovered an untitled manuscript of 138 pages at the Houghton Library at Harvard University. Titling it Diana and Persis, the book was published in 1978. There are a couple of cryptic mentions, first in Louisa’s journal, dated December of 1878:

“ … begin work on an art novel, with May’s romance for its thread.” (page 211, The Journals of Louisa May Alcott, edited by Joel Myerson and Daniel Shealy; Madeleine B. Stern, associate editor).

“Louisa is at the Bellevue writing her Art story in which some of my adventures will appear.” (page 7, Diana and Persis, edited by Sarah Elbert).

The story focuses on two women artists: the elder Diana, a sculptor, modeled somewhat after Louisa; and the younger Persis, modeled after May. Both are dedicated to their art to the exclusion of all else (although Diana appears to be more successful at this than Percy in the beginning as she has renounced marriage and family while Percy is distracted by suitors).

Percy makes the decision to study in Paris, having received financial support from her grandmother. She understands that she is distracted:

“If we give ourselves entirely to art we must trample on Nature occasionally; so in escaping from the lovers who annoy me to the work I prefer I must also turn my back on the last of my kindred and my dearest friend.” (Diana and Persis, page 54)

Diana is encouraged by her friend’s decision despite the fact that the two, close as sisters, will be separated by great distance. Yet she still feels compelled to dispel advice:

“’Don’t look for it [artistic inspiration] in marriage that is too costly an experiment for us. Flee from temptation and do not dream of spoiling your life but any common place romance, I implore you,’ cried Diane earnestly, and this was not the first time she had given the same advice.” (page 57) 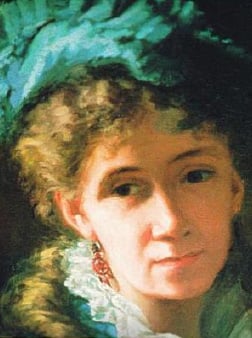 Despite Percy’s serious ambition, she also desires a husband and children. She wanted it all and was convinced it was doable. She confessed to Diana regarding her “hungry heart” as well as her ambition, admitting that “art alone does not seem to satisfy me as it does you.” (Ibid)

In contrast, Diana echoes what Louisa wished she could be – free to pursue her writing without distraction of family duty, something with which she was continually burdened:

“Denying herself the pleasures of youth, the honors of sex and beauty, the joys of love, the solaces of home, she went on her steadfast way, unresting and unhasting as a star; as cold and brilliant and remote to all except the few who had discovered hidden fires in this fair planet. Bread and the right to work was all she asked of the world as yet. One friendship was the only luxury she allowed herself and in this she found not only the solace but the stimulant she needed, for it was a most sincere and sympathetic bond.” (page 64)

The next three chapters describe the following:

Unlike Louisa who was hampered by her responsibilities and health issues, Diana was able to meet Percy’s husband and child and witness her friend’s triumph in “having it all.” Yet at the same time Diana notices signs of Percy being drawn away from her art, witnessing the dusty easel and dried paint on the palette in her studio.

As progressive as husband August appears to be (“I believe a woman can and ought to have both if she has the power and courage to win them” (page 127), there are hints of potential future troubles in competing with Percy’s art as shown through his “neglected” coffee cup, his sense of feeling left out of the bond between the friends, and the use of Baby as a nude model for their paintings. “Unnatural mother! Would you sacrifice your child on the altar of your insatiable art?” (page 124).

Not meant to know?

As we will never know the outcome of May Alcott Nieriker’s life due to her untimely death after childbirth, so we shall never know the outcome of Diana and Persis since Louisa would not take up the story again, prostrate with grief over May’s passing. If I didn’t know better, I would say we were not meant to know, the experiment being so progressive that it was too far ahead of its time.

Diana and Persis offers this scenario: 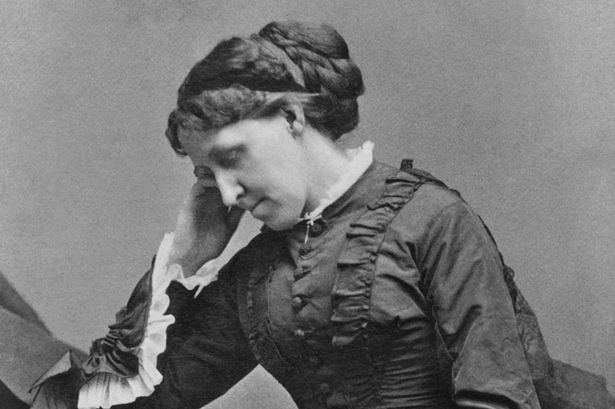 Somehow though, I doubt Louisa would create such a “happily ever after” ending, realist as she was, as it would make for a dull read. She had sowed seeds of doubt with Percy and her family, setting the stage for future tension. Anyone who has combined a passion for art, writing or music with raising a family knows how the two passions hotly compete. There is constant warring between the two and plenty of guilt to go along with it.

I get the sense that Diana would have eventually married Stafford but it would have taken a long time for her to accept that she could pursue her art within a happy domestic setting. Stafford delights in Diana’s talent and without pontificating, as August, did, he praises her bold statue of “Saul” (“There is virile force in this, accuracy as well as passion – in short, genius.” – page 103) while reveling in the beautiful and tender likeness of his son in her statue of “Puck.”

Two small parts of this story stood out for me, once again revealing the authenticity of Louisa’s writing. A statement by Stafford, who had lost his beloved wife, reveals the effects of grief upon art:

“… the power has gone out of me. My friend, may you never know the awful weariness that comes when the golden apples once has struggled for turn to ashes on the lips.” (page 105)

Having experienced this twice with the deaths of my parents, I know from whence he speaks. Music was my passion at the time; it took two years and much hard work to regain my art once my father passed. When my mother entered hospice, I prayed to God asking him not to resurrect the music if it should die within me. He honored that prayer, giving me time to mourn before slowly restoring it. And in the meantime, of course, I was led to write.

I believe that Louisa, understanding the creative, transforming force of grief, would have restored Stafford’s genius through his relationship with Diana. What a wonderful story of redemption and resurrection that would have been!

Percy’s story would have so resonated with today’s women who are keenly aware of the struggles of juggling family and career. The competition is keen yet I have to say that although my art was delayed many years due to family responsibilities, I do believe it is better for having gone through the undertaking.

Finally, this book is filled with the craving Louisa had to live the dedicated life of an artist without all of her family obligations. Tethered by her own sense of duty and hampered by her poor health, the best she could do was to support the sister who could live the dream, and retreat to her imagination in the story of Diana and Persis.

Diana and Persis has all the promise of Little Women with its honesty, heart and keen insight. How unfortunate for all of us that it was not completed. But how lucky too, that the manuscript was discovered and published.

Where to find Diana and Persis

You can find Diana and Persis in these forms: Sarah Elbert’s version which I highly recommend because of her opening essay, and also in Alternative Alcott, edited by Elaine Showalter.

For further reading check out Anne E. Boyd’s book, Writing for Immortality, pages. 109–117, for an analysis of Diana and Persis. For one thing, Boyd reveals yet another unpublished manuscript at Houghton, this one by May herself called An Artist’s Holiday. You can find out more information about that manuscript here.

Originally published on Louisa May Alcott is My Passion. Reprinted by permission.