Dorothy West’s The Wedding: A Miniseries (1998) 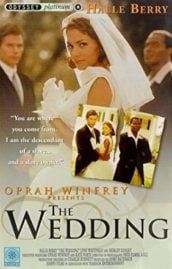 The Wedding, a two-part miniseries that premiered on television in 1998, speaks to the intersecting issues of race, gender, and class in mid-1950s America.

Based on Dorothy West‘s 1995 novel The Wedding, it starred Halle Berry, Eric Thal, and Lynn Whitfield. The book was adapted into a screenplay by Lisa Jones and produced by Oprah Winfrey’s company, Harpo Productions.

The setting of Martha’s Vineyard shows an aspect of the privilege available to the main character, Shelby Coles. Played by Halle Berry, Shelby is a mixed race young woman from an upper-middle class home, about to marry Meade Hall (played by Eric Thal), a white jazz pianist and composer.

Family complications and an interracial relationship

Shelby and Meade’s impending marriage is complicated by both parents’ skepticism toward the interracial relationship. After a family friend, Lute McNeil, pursues his long-time love for Shelby and makes one too many racist comments toward the couple, Shelby and Meade split.

Meanwhile, Shelby’s mother realizes the toxicity of her own marriage as she figures out that her husband values her the status conferred upon her by her light skin. Worse yet, he’s having an affair.

Dorothy West wrote The Wedding as a reflection of her own experiences growing up among the African-American elite of the northeastern U.S.. West grew up in Boston to a formerly enslaved father who became a successful businessman. His success allowed him to provide educational opportunities for his daughter.

Immersing herself in the Harlem Renaissance movement, West thrived as an author and editor, continuing to write until her death in 1998. That was the same year in which this mini-series premiered.

Reviews of the miniseries The Wedding were mixed overall, as typified by the one in Variety that began:

“Based on the Dorothy West novel, The Wedding sells the notion that upper-crust black society during the first half of the 20th century could be just as dysfunctional and backstabbing as its caucasian counterpart.

It could also be nearly as racist. The issues raised in scribe Lisa Jones’ adaptation are generally compelling ones about class struggle, biracial interaction and familial commitment. But Jones’ execution never quite clicks, due in part to some weak casting.”

This review, which you can read in full here concludes:

“Yet the exquisite photography from Fred Elmes and his team and the lush period details could overcome the sins of The Wedding if not for one fatal flaw: the luminous Berry and stiff Thal have all the chemistry of rotting driftwood.

There’s no real passion in either of their portrayals, which dooms a relationship that we presume needs to be packed with fire to survive.Not a lot of people to root for here, either, just a collection of highly evolved victims. Somehow, it seems unlikely this is what Oprah had in mind.”

The New York Times review was much kinder:

“What Shelby learns transcends color and class. As a young man in 1928, her father had been advised to marry for social prestige.

‘Love is a luxury few of us can afford,’ said an older, professionally prominent black man. By 1953, Shelby decides that real freedom means being able to marry for love. To some, that may seem like a soft-headed view of racial politics. But that is the embracing, deeply human vision this ambitious and first-rate film insists on.”

More about The Wedding (Miniseries)