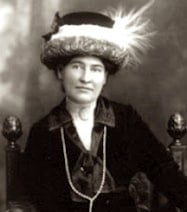 Dear Literary Ladies,
What is the worst mistake aspiring writers make when first starting to send their work out into the world? There’s often either no feedback or mixed messages, so what’s the most important lesson to keep in mind?


When I left the University of Nebraska after graduating and went to New York City, I wanted to write after the best style of Henry James —the foremost mind that ever applied itself to literature in America. I was dazzled. I was trying to work in a sophisticated medium and write about highly developed people whom I knew only superficially.

It was during the six years when I was editor of McClure’s magazine that I came to have a definite idea about writing. In reading manuscripts submitted to me, I found that 95 per cent of them were written for the sake of the writer never for the sake of the material. The writer wanted to express [her] clever ideas, his wit, his observations. Almost never did I find a manuscript that was written because a writer loved [her] subject so much [she] had to write about it.

Usually, when I did get such a manuscript it was so crude it was ineffective. Then I realized that one must have two things — strong enough to mate together without either killing the other — else one had better change his job. I learned that [one] must have a technique and a birthright to write — I do not know how else to express it. [She] must know his subject with an understanding that passes understanding — like the babe knows its own mother’s breast.

—Willa Cather, from an interview, November 1921