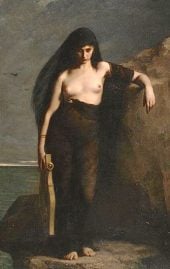 This celebration of the indescribably brilliant and sublime poetry by ancient Greek poetess, Sappho (born around 620 BCE in Lesbos, Greece) was originally published in BookRiot. Contributed by Nancy Snyder; reprinted by permission. The poems by Sappho presented following the introduction were all translated from the Greek.

“Although only breath, words which I command are immortal,” wrote Sappho around 510 BC. And how glad we are that we have Sappho’s words all these centuries later.

Sappho’s lyric poetry, poetry meant to be accompanied by a lyre and sung, entices us to discover Eros and Aphrodite (the god and goddess of romantic love) and all the earthly delights that accompanies such natural pursuits.

Sappho’s poetry was a detour from the impersonal, heroic epic singing of wars and battle that played very well in Athens. Sappho extolled the virtues of love, of the primacy of emotion and the subjective experience.

The demonization of Sappho

Sappho’s verse came to be viewed as a significant milestone in the evolution of poetry – there was just one problem.

Sappho repeatedly became the vicious target of the Church and literary critics and historians who were literally out to crush Sappho’s very being. Because it was deemed impossible, unheard of, that Sappho (or any woman) would write such exquisite words to another woman, exalting their beauty and becoming tongue-tied in their presence, Sappho was morphed into a “licentious whore” and her work was publicly burned by Pope Gregory in 1073.

Translators and scholars felt free to rearrange a few words to appear that Sappho was singing to a man – to spare potential readers any possible gender confusion about the proper focus for a young woman or man. In brief, Sappho’s life was appropriated to fit the strictures of moralists.

The demonization of Sappho became so entrenched that her home, the island of Lesbos, morphed into the word Lesbian.  This homosexual woman was at best, promiscuous; at worse, Lesbian was a clear and present danger to society. 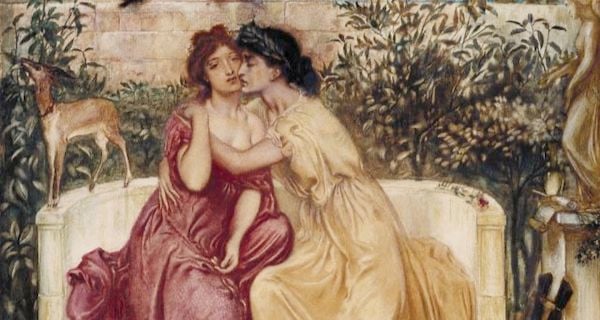 There are just a handful of details regarding the facts of Sappho’s life. It has been established that Sappho was born around 615 BC to an aristocratic family on the Greek island of Lesbos during a period of a great artistic rebirth on the island. Sappho had several brothers, married a wealthy man named Cercylas and had a daughter, Cleis. Sappho spent nearly all of her life on Lesbos in the city of Mytilene and died around 550 BC.

However, given the unabashed delight Sappho found in the company and beauty of women, Sappho created a world of dominant feminine sensuality that was unimpressed with wars and all of the brutal pursuits of men.

Sappho’s subject matter was the feminine world; to deny and disrespect Sappho’s choices is to deny Sappho her humanity and to lessen her work.

We will not allow that to happen: let’s celebrate Sappho every month, not just in June during PRIDE, because Sappho brings us an abundance of joy and the moralists who would censor our dear Sappho, are immoral. 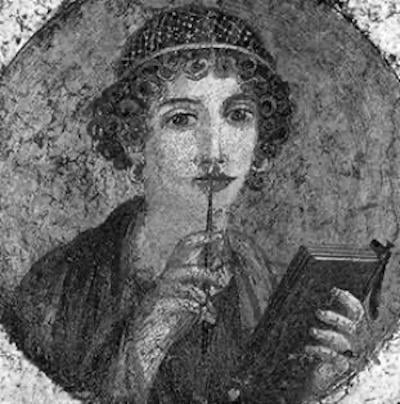 Immortal Aphrodite, on your intricately brocaded throne,
child of Zeus, weaver of wiles, this I pray:
Dear Lady, don’t crush my heart
with pains and sorrows.

Rapidly they came. And you, O Blessed Goddess,
a smile on your immortal face,
asked what had happened this time,
why did I call again,

and what did I especially desire
for myself in my frenzied heart:
“Who this time as I to persuade
to your love? Sappho, who is doing you wrong?

Come to me now once again and release me
from grueling anxiety.
All that my heart longs for,
fulfill. And be yourself my ally in love’s battle.

Some say an army of horsemen,
some of foot soldiers, some of ships,
is the fairest thing on the black earth,
but I say it is what one loves.

It’s very easy to make this clear
to everyone, for Helen,
by far surpassing mortals in beauty,
left the best of all husbands

and sailed to Troy,
mindful of neither her child
nor her dear parents, but
with one glimpse she was seduced by

Aphrodite. For easily bent..
and nimbly..
has reminded me now
of Anactoria who is not here;

I would much prefer to see the lovely
way she walks and the radiant glance of her face
than the war-chariots of the Lydians or
their foot soldiers in arms.

That man to me seems equal to the gods,
the man who sits opposite you
and close by listens to your sweet voice

and your enticing laughter –
that indeed has stirred up the heart in my breath.
For whenever I look at you even briefly
I can no longer say a single thing,

but my tongue is frozen in silence;
instantly a delicate flame runs beneath my skin;
with my eyes I see nothing;
my ears make a whirring noise.

A cold sweat covers me,
trembling seizes my body,
and I am greener than grass.
Lacking but little of death do I seem.

2
I tell you
someone will remember us
in the future.

3
Now, I shall sing these songs
Beautifully
for my companions.

5
“He is dying, Aphrodite;
luxuriant Adonis is dying.
What should we do?”

“Beat your breasts, young maidens.
And tear your garments
in grief.”

7
But come, dear companions,
For day is near.

8
The moon is set. And the Pleiades.
It’s the middle of the night.
Time [hôrâ] passes.
But I sleep alone.

9
I love the sensual.
For me this
and love for the sun
has a share in brilliance and beauty

12
A servant
of wile-weaving
Aphrodite…

14
Eros
Coming from heaven
throwing off
his purple cloak.

16
As a wind in the mountains
assaults an oak,
Love shook my breast.

17
I loved you, Atthis, long ago
even when you seemed to me
a small graceless child.

18
But you hate the very thought of me, Atthis,
And you flutter after Andromeda.

19
Honestly, I wish I were dead.
Weeping many tears, she left me and said,
“Alas, how terribly we suffer, Sappho.
I really leave you against my will.”

And I answered: “Farewell, go and remember me.
You know how we cared for you.

If not, I would remind you
…of our wonderful times.

For by my side you put on
many wreaths of roses
and garlands of flowers
around your soft neck.
And with precious and royal perfume
you anointed yourself.

On soft beds you satisfied your passion.

And there was no dance,
no holy place
from which we were absent.”

22
Sweet mother, I can’t do my weaving—
Aphrodite has crushed me with desire
for a tender youth.

23
Like a sweet-apple
turning red
high
on the tip
of the topmost branch.
Forgotten by pickers.

Not forgotten—
they couldn’t reach it.

24
Like a hyacinth
in the mountains
that shepherds crush underfoot.

The moon has set,
and the Pleiades;
it is midnight, the time is going by
and I recline alone.

The sinking moon has left the sky,
The Pleiades have also gone.
Midnight comes–and goes, the hours fly
And solitary still, I lie.

The Moon has left the sky,
Lost is the Pleiads’ light;
It is midnight,
And time slips by,
But on my couch alone I lie.

Happy bridegroom, Hesper brings
All desired and timely things.
All whom morning sends to roam,
Hesper loves to lead them home.
Home return who him behold,
Child to mother, sheep to fold,
Bird to nest from wandering wide:
Happy bridegroom, seek your bride.

Like the very gods in my sight is he who
sits where he can look in your eyes, who listens
close to you, to hear the soft voice, its sweetness
murmur in love and

laughter, all for him. But it breaks my spirit;
underneath my breast all the heart is shaken.
Let me only glance where you are, the voice dies,
I can say nothing,

but my lips are stricken to silence, under-
neath my skin the tenuous flame suffuses;
nothing shows in front of my eyes, my ears are
muted in thunder.

And the sweat breaks running upon me, fever
Shakes my body, paler I turn than grass is;
I can feel that I have been changed, I feel that
death has come near me.

(From Greek Lyrics, edited by Richmond Lattimore, The University of Chicago, 1949, 1960)

Some there are who say that the fairest thing seen
on the black earth is an array of horsemen;
some, men marching; some would say ships; but I say
she whom one loves best

is the loveliest. Light were the work to make this
plain to all, since she, who surpassed in beauty
all mortality, Helen, once forsaking
her lordly husband,

fled away to Troy—land across the water.
Not the thought of child nor beloved parents
was remembered, after the Queen of Cyprus
won her at first sight.

Since young brides have hearts that can be persuaded
easily, light things, palpitant to passion
as am I, remembering Anaktória
who has gone from me

and whose lovely walk and the shining pallor
of her face I would rather see before my
eyes than Lydia’s chariots in all their glory
armored for battle.

(From Greek Lyrics, edited by Richmond Lattimore, The University of Chicago, 1949, 1960)

Say what you like about Charaxos,
that’s a fellow with a fat-bellied ship
always in some port or other.
What does Zeus care, or the rest of his gang?
Now you’d like me on my knees,
crying out to Hera, “Blah, blah, blah,
bring him home safe and free of warts,”
or blubbering, “Wah, wah, wah, thank you,
thank you, for curing my liver condition.”
Good grief, gods do what they like.
They call down hurricanes with a whisper
or send off a tsunami the way you would a love letter.
If they have a whim, they make some henchmen
fix it up, like those idiots in the Iliad.
A puff of smoke, a little fog, away goes the hero,
it’s happily ever after. As for Larichos,
that lay-a-bed lives for the pillow. If for once
he’d get off his ass, he might make something of himself.
Then from that reeking sewer of my life
I might haul up a bucket of spring water.

Explore more poetry by classic women authors on this site.