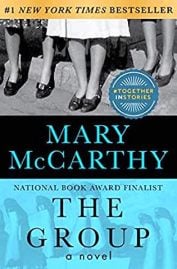 The Group (1963), is arguably American author Mary McCarthy’s best-known work. Known for trenchant works of fiction and nonfiction, McCarthy likely would not have chosen this juicy, gossipy novel, with elements of autobiography, to be a great part of her lasting legacy, as we’ll see later.

The Group hit the New York Times Bestseller List several weeks after its publication and stayed there for nearly two years. Considered rather scandalous for its time, it touched on issues of contraception, abortion, mental illness, male chauvinism, and lesbian relationships, as experienced by young women in the 1930s.

The book was banned in several countries, but that didn’t deter it from being a huge international hit. The film version of The Group premiered in 1966, featuring a stellar cast (including a breakthrough role for Candice Bergen) and direction by Sidney Lumet.

The book follows the lives of a group of friends from Vassar College (which McCarthy attended), from the time of their graduation in 1933. The young women — Kay, Dottie, Mary, Press, Libby, Elinor (Lakey), Helena, and Polly, are beginning to experience the trials of young adulthood just as America is gripped by the Great Depression. Life unfolds with its joys and triumphs, as well as its sorrows and challenges.

Here’s a succinct description from the 1991 Mariner Books edition:

“Written with a trenchant, sardonic edge, The Group is a dazzlingly outspoken novel and a captivating look at the social history of America between two world wars. Juicy, shocking, witty, and almost continually brilliant.

Mary McCarthy’s most celebrated novel follows the lives of eight Vassar graduates, known simply to their classmates as ‘the group.’ An eclectic mix of personalities and upbringings, they meet a week after graduation to watch Kay Strong get married.

After the ceremony, the women begin their adult lives — traveling to Europe, tackling the worlds of nursing and publishing, and finding love and heartbreak in the streets of New York City.

Through the years, some of the friends grow apart and some become entangled in each other’s affairs, but all vow not to become like their mothers and fathers. It is only when one of them passes away that they all come back together again to mourn the loss of a friend, a confidante, and most importantly, a member of the group.”

The Group was widely reviewed, often with breathless attention to its more controversial details. Male critics were occasionally harsh. Norman Mailer, known for being a chauvinistic jerk, wrote in the New York Review of Books: “Her book fails as a novel by being good but not nearly good enough … she is simply not a good enough woman to write a major novel.”

A 2017 Guardian article reporting on that year’s reissue of The Group, reflected on the book’s impact on McCarthy’s life and reputation:

“For years afterwards, McCarthy received letters from irate readers accusing her of a ‘perverted outlook on life.’ She was shunned by her former university contemporaries, many of whom felt they had been mercilessly pilloried in the book. Despite the fact that The Group went on to top the New York Times bestseller list for almost two years, the experience was still raw enough for McCarthy to admit in a 1989 newspaper interview shortly before her death that she thought The Group had ‘ruined my life.’”

Other critics were kinder, considering the novel for its intrinsic value rather than what the reviewer personally thought of Mary McCarthy. Critic David Boroff wrote: “Miss McCarthy has come through brilliantly. It is sheer exhilaration to watch her nimble intelligence at work, great joy to read her rich and supple prose. The Group clearly is one of the best novels of the decade.”

Some of the real-life women who were fictionalized — McCarthy’s Vassar classmates — recognized themselves in the novel and were none too happy.

The long view has been kind to The Group. With the benefit of hindsight, critic Julia Armfield named The Group the best book of 1963 in a 2019 piece in Granta.

A 2019 essay in LitHub by Mikaella Clements directs the contemporary reader to Please Take this Summer to Become Obsessed with the Group — with the tagline, Mary McCarthy’s 1960s novel about the 1930s feels like 2019. She writes that reading The Group is:

“… an obsessive experience, and one that, despite McCarthy’s and the novel’s fame, still feels like discovering a thrilling secret. Its prose shows a master stylist at work, its aesthetics are striking—all ivory-tipped cigarettes, hand-pureed pâté, Vassar socialists in dungarees—and it has a surprise queer romance that twists the whole narrative into new shape. It’s my new standard for a summer read: lavish, hilarious, smart, and mean, like a glamorous friend you’re torn between fearing and crushing on.”

In Vassar Unzipped, a 2013 Vanity Fair piece celebrating the 50th anniversary of the novel, Laura Jacobs “explores why the book still dazzles as a generational portrait, falters as fiction, and blighted McCarthy’s life.”

Fascinating fact! The Group served as an inspiration for Candace Bushnell for her 1996 novel, Sex and the City, which was the basis, of course, for the massively successful TV series and subsequent films. Bushnell wrote the foreword to a 2009 reissue of The Group.

Other contemporary reconsiderations call The Group “timeless.” Perhaps McCarthy was ahead of her time, but it’s also depressing to think that today’s women continue to struggle with the same issues as those of the 1930s. 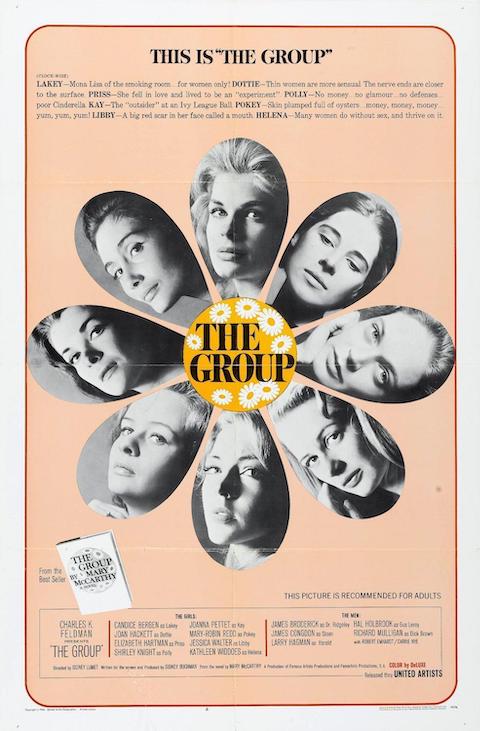 A 1963 review of The Group by Mary McCarthy

From the original review in The Kansas City Star, August 25, 1963: Vassar May Confuse Them, But It Can’t Defeat Them: The Group by Mary McCarthy, reviewed by Richard Rhodes:

Ten years in the lives of eight girls, Vassar Class of ’33 — that is The Group, an excellent successor to Mary McCarthy’s earlier novels, witty, gossipy, crammed with artifacts of the 1930s, occasionally cruel, outstandingly realistic.

Besides “The Group” there are also fathers and husbands, babies under rigid feeding schedules, casseroles made with Campbell’s Soup, the new efficiency apartments, and the just-completed Museum of Modern Art.

That so much paraphernalia can be closet in one book is a triumph of the author’s style, which combines the lilting patois of an Irish washerwoman with the factual journal of a literate anthropologist. The Group’s dated slang, for example, she remembers perfectly.

“Kay and Harald had just about fainted when they heard what Dottie had been up to, behind their backs.” What Dottie has been up to, early in the novel, was a one-night stand with a man she had met only the same afternoon, at Kay’s wedding. Dottie, so innocent that her greatest worry was that Dick didn’t kiss her before they bedded.

This confusion between what Dottie’s Vassar education convinced her is “enlightened,” and what her family life and social values prepared her for, is typical of most of the members of the Group. They are sprung from a college staffed by scientific suffragettes, but they have only half-learned or half-believed, their lessons. 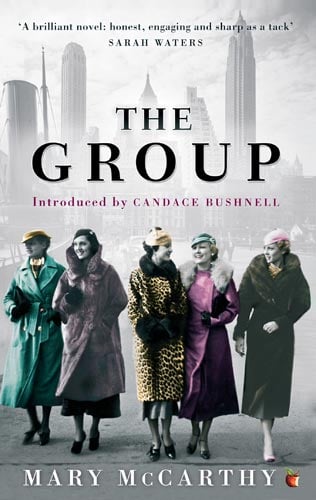 When their education fails them they revert to type and valiantly stick together. If Kay has the enlightened daring to be married in a brown dress without the benefit of mother, father, or virginity, they will loyally attend, clucking and a little wide-eyed.

If everyone insists Polly’s father is a potentially dangerous manic-depressive, Polly will nevertheless take him into her apartment and support as best she can his extravagant eccentricities.

If Press Hartshorn Crockett is too timid to give in to her natural desires to play with her baby (her pediatrician husband insists it is to be picked up only for feedings), she will still envy and secretly admire Norine, who sunbathes her son naked in Central Park, and feeds him table scraps at three months: “… already he had shown a taste for Italian spaghetti.”

Press and Norine’s conversation in the park, late in the novel, might very well sum up the conflict which enlivens the book:

“You really think our education was a mistake?” Press asked anxiously. Sloan had often expressed the same view, but that was because it had given her ideas he had disagreed with.

Norine could stretch in boredom at Priss’s question. Norine, a non-Group girl, survived Vassar almost untouched, reverting to type soon after graduation — she is slovenly, sensual, relaxed, and often immoral. She doesn’t have the conflicts that Press and The Group have.

But how much even they are “crippled for life” remains, Mary McCarthy makes clear, to be seen. Sooner or later most of them learn to manage the plain business of life —marriage, family problems, money problems babies, keeping house. Probably all survived to become good citizens and settled members of their appropriate social class, with babies and suburban homes and second cars and nostalgic memories of their years at Vassar.

Since society and their education were mutually exclusive, most of the Group undoubtedly found it easier to jettison the latter.

All except Mary McCarthy, Vassar class of ’33, who now can claim among her many charms and curios the honor of having elevated the inflections of girlish gossip to the level of an effective, ambient prose style.

An Irish orphan girl from Seattle with a good ear and a forthright pen, she now lives with her husband in Paris. And after all these years she has finally got “The Group” together again.

More about The Group

*This post contains affiliate links. If a product is purchased by linking through, Literary Ladies Guide receives a modest commission, which helps maintain our site and helps it to continue growing!