Testament of Youth by Vera Brittain (1933) 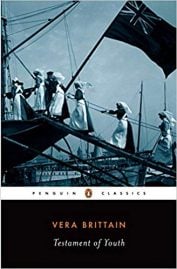 Testament of Youth by Vera Brittain (1893–  1970) has endured as this British author’s best known work. A memoir on how her life, and that of her generation, were forever marked by the losses endured as a result of World War I, it is indeed a touching testament.

Brittain’s brother, Edward, and her fiancé, Ronald Leighton, were both killed during the war. As a result of the these losses, and the suffering she personally witnessed as a volunteer nurse, she became a pacifist and remained a dedicated member of the peace movement for the rest of her life.

Testament of Youth is now recognized as one of the most iconic memoirs of the twentieth century. Written with the perspective of time, Vera was already published author when she began the book.  She attempted to fictionalize the narrative at first, but it didn’t work. In a  2013 homage to Testament of Youth on its eighty year anniversary, The Guardian (U.K.) wrote:

“It was only when she decided to write as herself that her authorial voice seemed to flow and the events she had endured were given a poignant immediacy to which readers could relate. In Testament of Youth, the words seemed to pour out of her, a potent mixture of rage and loss, underpinned by lively intelligence and fervent pacifist beliefs.”

The book was an instant success, with all 3,000 printed copies selling out on publication day. Over the next six years, the book sold more than 120,000 copies and earned praise from many writers, including Virginia Woolf, who wrote in her journal that she stayed up all night to finish reading it.

In the U.S., Testament of Youth was a critical and commercial success as well, praised as “heartbreakingly beautiful.” How does the book hold up? One contemporary reviewer, Katrina Robinson, gives the book a mixed review, yet adds:

“It’s still unique as one woman’s personal account of a cataclysmic moment in the history of modern Western society. It’s a powerful primary source written by a woman with a fresh and elastic sense of history, who went on to be a player in the fields of politics, protest, and feminism.

It gives a real feel for UK and European politics and society (albeit at the upper middle-class end) during and after World War One, and it’s an achievement Vera Brittain repeated in her sequel Testament of Experience, which covers the years 1925 to 1950 and bore witness to the rise of Fascism and the dropping of American atom bombs on Japanese civilians in 1945.”

In recent years, Testament of Youth has been brought back to life a number of television and film adaptations. Here is a review from the time of its publication, capturing the flavor of the book and the important story and lessons in its pages. 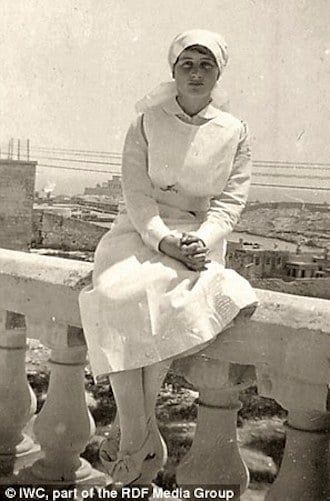 A 1933 review of Testament of Youth

From the original review of Testament of Youth in the Salt Lake Tribune, November 12, 1933, by E.E. Hollis:

An autobiographical story of the war generation of England — moving, beautiful, and tragic

Testament of Youth by Vera Brittain is a book whose deep significance can hardly be overestimated. Of importance in its historical aspect, it is also a spiritual record of impelling power. Dealing with the war period, it is unlike any other story of those years.

Vera Brittain was of that generation to whom the war came to interrupt its preparation for life, to blight its budding hopes, and to put a new and ugly face upon its whole world. Her autobiography is a testament to what English youth suffered and lost during the World War I years.

Her story covers the first quarter of the twentieth century and makes startlingly clear the extraordinary changes wrought, in manners and morals, in society and politics. Her childhood as the daughter of the middle class is described briefly.

When the first rumbles of war were heard, Miss Brittain had succeeded, after much difficulty, in overcoming her father’s opposition to college for his “little girl.” She sought to be released from the boredom of “provincial young ladyhood” and was preparing for entrance to Oxford.

Life was opening joyfully; her bent for literature was to be satisfied and also dreams of love were stirring. She had found a most congenial companion in her brother Edward’s school intimate, Ronald Leighton, a brilliant young man.

Miss Brittain went to Oxford, but Edward and Ronald, who were to have started at the same time, were now in uniform. All she had worked so hard to achieve now seemed empty.

By the spring of 1915 Miss Brittain had become a V.A.D. (Voluntary Aid Detachment — women who tended to wounded soldiers, of whom it was said later, “no one less than God Almighty could give a correct definition of the job of a V.A.D”), doing unpleasant tasks cheerfully, feeling that in a measure she shared the hardships her lover was enduring in France. She also lived on letters from the front. 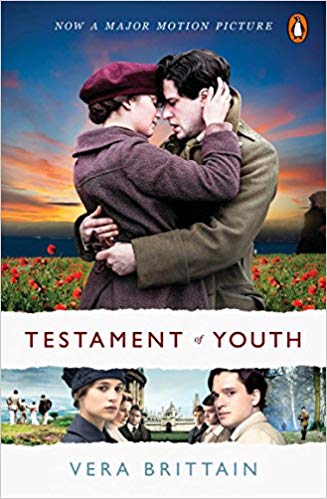 Testament of Youth by Vera Brittain on Amazon*

Losing a brother and a lover

At Christmas 1915 Ronald was to have his leave. On leave at home she waited with great anticipation fro his message, but the message was from his sister Clare, to say that Ronald had died of wounds at a Casualty Clearing station on the eve of his return.

Battling through her “individual hell,” she carried on at the London hospital, and was able to nurse her dearly loved brother, returning with convoys flowing back to the hospital from the battle on the Somme. Months later, Edward was killed in action on the Italian front.

Miss Brittain was sent on foreign service in Malta, in whose glamorous, sunlit beauty her heart wounds found some solace and healing. Later, she learned of the horrors of the general hospital at Etaples, through with passed a ceaseless storm of Tommies during the somber days when the German offensive rolled forward.

Here, too, she watched “the United States physically entering the war … our deliverers at last, marching; a formidable bulwark against the peril looming.”

The agony and falsity of war

All of these strenuous, anguishing experiences make engrossing, if painful, pages; it is through the letters of Ronald, Edward, and Miss Brittain herself, that one realizes the fierce agonies of their generation. It is not intended to minimize them, for this testament of youth is a challenge to forgetting, to the succeeding generation that they shall know what war means.

Miss Brittain insists, “The causes of war are always falsely represented; its honour is dishonest and its glory meretricious.” There is, too, comment on the injustices and follies in the conduct of war, resulting from mature reflection and understanding.

The record carries on through the post-war years, in which a maimed generation of youth struggled gallantly to gather up the broken pieces and rebuild life.

A return to Oxford, and to life

In 1919, the year “dominated by a thoroughly nasty Peace,” Vera Brittain returned to Oxford, accepted yet not welcomed as one of those “immoral” V.A.D.s. The story of her rise and activities as a journalist, lecturer, author, and internationalist, is scarcely less moving and important than the earlier chapters.

Testament of Youth is not one to read for pleasurable pastime, but one that insists on being read. It is alt once beautiful, terrible, and tragic, and written with courage and honesty.

More about Testament of Youth