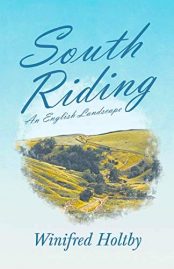 South Riding was the last published novel of Winifred Holtby (1898 – 1935), released the year after her untimely death at the age of thirty-six. It remains her best-known work and has been adapted several times for various media.

Winifred Holtby was an accomplished British author, journalist, and activist. According to this site’s biography of Holtby:

She also had a successful career in journalism and wrote the first critical study of Virginia Woolf in English. During her lifetime, her fame derived from her work for prominent newspapers and magazines, including the feminist publication Time and Tide. She wrote about democracy and social welfare, feminism and pacifism, education and responsibility, racism and injustice.

South Riding’s publication was completed with Vera Brittain’s intervention (her dear lifelong friend), overriding the concerns of Alice Holtby, Winifred’s mother. It has never been out of print and sold 40,000 copies in the first year in the UK and 20,000 copies in the US. It was awarded the James Tait Black Memorial Prize in 1937 and, over time, has enjoyed a resurgence of popularity with a film, radio dramatizations, and the 2011 BBC series.

South Riding is set in a fictional area of Yorkshire. The main characters are Sarah Burton, a young headmistress, Joe Astell, a poverty-fighting socialist, Robert Carne, a conservative who is tormented by a disastrous marriage, and Mrs. Beddows, the first woman alderman of the district. The latter was surely inspired by Holtby’s mother, Alice, who held the same post in her real-life area of Yorkshire.

From the Audible audiobook description:

“Winner of the James Tait Black Memorial Prize, Winifred Holtby’s greatest novel was published posthumously Winifred Holtby’s masterpiece is a rich evocation of the lives and relationships of the characters of South Riding. Sarah Burton, the fiery young headmistress of the local girls’ school; Mrs Beddows, the district’s first alderwoman–based on Holtby’s own mother; and Robert Carne, the conservative gentleman-farmer locked in a disastrous marriage — with whom the radical Sarah Burton falls in love. Showing how public decisions can mold the individual, this story offers a panoramic and unforgettable view of Yorkshire life.”

The book enjoyed much positive attention from the time it was published, becoming a true modern class for its complexity, readability, attention to the details of everyday life, and observations of human nature.

The title of Miss Holtby’s latest and, unhappily, her last novel suggests à fabulous setting, but as a matter of fact, there is nothing other-worldly in South Riding.

Even without the help of the map on the jacket we could identify the estuary of the River Leame and recognize the great city of Kingsport on its northern shore.

And perhaps those familiar with the district will be able to find counterparts for Flintonbridge and Kiplington and Cold Harbour Colony — that stretch of Dutch landscape reclaimed from the marshes of the Leame by an eighteenth-century philanthropist.

A view of society in Southeast Yorkshire

Miss Holtby has used her imagination not to create a world but to bring vividly before our eyes a world already in being. South Riding shows, in panorama and also in cross-section, a comprehensive view of society in Southeast Yorkshire, and among the hundred-and-sixty-nine characters are to be found a kitten, Kate Theresa, who plays a small part in the story, and a horse, Black Hussar, who plays a large one.

There is a common force which affects the lives of all these people if it does not actually bring them together: the County Council.

The book is divided into eight parts: Education, Highways and Bridges, Agriculture and Small Holdings, Public Health, Public Assistance, Mental Deficiency, Finance, Housing, and Town Planning: and each is prefaced by an extract from the agenda or minutes of the Council meetings.

It is, therefore, as collectivist in conception as a novel can be: “We are all members one of another” might be its motto. But Yorkshire people, whatever their political convictions, are in the main individualists at heart. Miss Holtby was well aware of this.

The Council issues its decrees and the electors obey, but not like automata. Each has his or her private interpretation of the public will, his or her personal reactions.

In the case of Miss Sarah Barton, the Council’s action changed the entire shape and color of a life. But for her appointment to the headmistress-ship Kiplington High School for Girls she would never have met Robert Carne or fallen in love with him.

She would have remained what she was, conscientious, energetic, efficient, compassionate, with a justifiable confidence in herself and her powers. She would have continued to make war on muddle and ignorance; but without the experience of that supreme defeat and humiliation (a little softened by Mrs. Beddows’ nearly forgotten message) she would have been incomplete, with no knowledge of suffering save at second-hand.

Carne himself, sporting farmer, and local squire, would have been much the same kind of man had there been no Council whose progressive ideas he could obstruct. In the hunting: season he often failed to attend its meetings, and when he was turned out he did not greatly repine.

Half of his heart was with his wife in the private. asylum in Harrogate; the other half he divided between Maythorpe, his horses, and his daughter (if she was his daughter), Midge. (Midge’s education was a source of sore trouble to Miss Barton).

Carne had no social conscience beyond the desire to maintain the station his family had kept for five hundred years. Miss Barton was drawn to him by the attraction of opposites; in him she admired just those qualities of which, theoretically, she most disapproved. 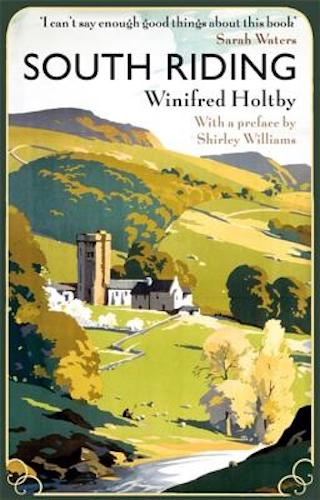 Every kind of human being

A score of other themes, each with its own individuality, are woven into the amazingly rich and complex pattern of South Riding. Some deal with people too near the poverty line to be able to indulge psychological eccentricities, some (e.g., the curious case of Alderman Snaith, who found relief from certain obsessions in lending Mr. Huggins money to manage his amours) are much less straightforward.

We meet every kind of human being from Mrs. Beddows, sane, sensible and hearty (but for one weakness), to Mrs. Carne, a helpless, hopeless lunatic.

And there are nearly as many moods. It is indeed a far cry from the songs and jokes perpetrated by Mrs. Hubbard’s “Jazz Octette” (“Take your feet off the table, Father, and give the cheese a chance!”) to the scene where Miss Barton confesses to Mrs. Beddows her love for Carne.

Judged by the facts recorded, the story cannot be called sanguine or cheerful. There is an unusually high rate of lunacy, illness, and general misfortune in this particular corner of England.

The author had an unquenchable belief in and sympathy with human nature; the courage and vitality that enabled her to cover so triumphantly her gigantic canvas blow like a high wind through the story, ventilating its most infected crannies.

Only at the end, I think, where the shadows disperse and the sky brightens, does the author’s hand lose a little of its sureness. Optimism and the will to optimism are different things, and Miss Holtby’s gallant effort to infer from her heroine’s change of heart a more hopeful future for society at large does not ring quite true as I have had the misfortune to read for a very long time.