Nobody’s Family is Going to Change by Louise Fitzhugh (1974) 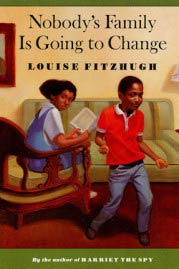 Nobody’s Family is Going to Change (1974) was the last book by Louise Fitzhugh to be published, just before her untimely death. The acclaimed author of Harriet the Spy was said to be distraught over mixed reviews of the book, and died at the age of forty-six, not long after its publication.

Today, with many more Black authors in the Middle Grade space, it’s unlikely that a white author would undertake such a foray into the life of an upper-middle-class African-American family. But at the time, Louise Fitzhugh’s novel seemed a bold and fresh stereotype-busting story dealing with race and gender.

Emma wants to be a lawyer, Willie wants to dance

The story centers on eleven-year-old Emancipation Sheridan, Emma for short. She knows she wants to grow up to be a lawyer like her stuffy, rather rigid father; her little brother Willie, age seven, wants to be a Broadway dancer. Neither of these ambitions go over well with the parents, especially Mr. Sheridan, who regards his children’s interests and desires as bordering on ridiculous.

Leslie Brody writes in Sometimes You Have to Lie: The Life and Times of Louise Fitzhugh (2020), “Mr. Sheridan has designed a strategy to protect his family in a racist culture, but despite his good intentions, his children see him as willfully misunderstanding them and unjustifiably controlling. Emma bridles at the injustice of his position and at the absurd limitations to which she is subject.”

Mrs. Sheridan is seen as a loving mother, devoted to home and family, but rather passive next to her husband’s bluster. Emma sees it this way: “Willie wants to do a girl’s thing, and I want to do a boy’s thing, and our father hates both of us.”

Both children feel misunderstood and unsupported, and as the story unfolds, Emma gains confidence in her ability to chart her own course while advocating for her little brother. It’s hard to say whether this novel’s central premise would resonate with today’s kids, who are less subject to such rigid roles when it comes to choosing a profession or passion.

Publishers Weekly‘s reviewer called the book “fast, funny, and provocative,” but wondered if the book’s theme wasn’t already a little dated and predictable. Though not by any means a bad review, Fitzhugh was devastated by it.

Louise Fitzhugh didn’t live to see Nobody’s Family is Going to Change  adapted to a much altered stage version, retitled The Tap Dance Kid. It ran on the Broadway stage from 1984 to 1985, a hit with audiences, though like its source material, got mixed reviews from critics. The central character shifted from Emma to Willie, who is ten years old in the musical, and their uncle, a dancer who encourages the boy to pursue his dreams.

Fitzhugh also didn’t live to see many of the other, more positive reviews of her final book, such as the one following, which appeared the year that followed its publication. 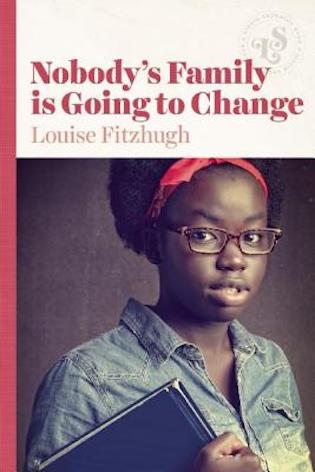 A 1975 review of Nobody’s Family is Going to Change

From the original review in The Lincoln Star by Mary Somerville, February 1975: Publishers have recently come a long way toward liberating children’s books … in general, there are more titles with strong female characters.

This does not mean that all books now being published are nonsexist. Far from it. As a matter of fact, nonsexist easily readers are practically unobtainable. But a large number of new picture books, nonfiction, and fiction for older children reflect the craving for human liberation.

Protagonist Emma is a tough, bright 11-year-old who wants to become a lawyer like Daddy. Daddy and Mother, the heads of this upper-middle-class Black family, aren’t too keen on either idea. they want Emma to be a wife and mother, and Willie her younger brother, to be the lawyer.

Will, on the other hand, wants to be a Broadway dancer, which is anathema to Mom and Dad. Emma’s Afro may grow the wrong way (sideways rather than up), but her head is screwed on right.

In the final scene, she realizes the truth of the title; if the family won’t applaud her career goals, she’ll just have to grit her teeth and make it the hard way.

Encomiums for Louise Fitzhugh, who died before this book was published. Harriet the Spy, her first and best, was way ahead of its time; she liberated her characters long before it was fashionable. She also revolutionized children’s books with her modern, zany and free-form plots. The best of recent authors … owe her an enormous debt.

You might also enjoy: Harriet the Spy by Louise Fitzhugh

More about Nobody’s Family is Going to Change

*These are Bookshop.org and Amazon Affiliate links. If a product is purchased by linking through this review, Literary Ladies Guide receives a modest commission, which helps maintain our site and helps it to continue growing!