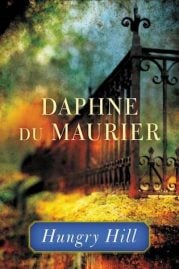 Hungry Hill by Daphne du Maurier is a 1943 novel by the prolific British author and playwright. Her seventh novel takes the form of a multigenerational family saga taking place from 1820 to 1920.

Inspired by actual events and places, the story follows the fortunes of the Brodricks, Anglo-Irish landowners who inhabit Clonmere castle.

While Hungry Hill  hasn’t remained as well-known as some of du Maurier’s more famous novels, notably Rebecca, My Cousin Rachel, Jamaica Inn, Frenchman’s Creek, and The Scapegoat, it was successful in its time. It went through dozens of editions, and like many of du Maurier’s other works, it was adapted to film. However, the 1947 movie version was roundly panned.

Hungry Hill was re-released in 2008 by Virago Press. From the publisher:

“Hungry Hill is a passionate story told with du Maurier’s unique gift for drama. It follows five generations of an Irish family and the copper mine on Hungry Hill to which their fortunes and fates are bound.

‘I tell you your mine will be in ruins and your home destroyed and your children forgotten . . . but this hill will be standing still to confound you.’ So curses Morty Donovan when ‘Copper John’ Brodrick builds his mine at Hungry Hill.

The Brodricks of Clonmere gain great wealth by harnessing the power of Hungry Hill and extracting the treasure it holds. The Donovans, the original owners of Clonmere Castle, resent the Brodricks’ success, and consider the great house and its surrounding land theirs by rights.

For generations the feud between the families has simmered, always threatening to break into violence …”

From the original review in The Journal Herald – Dayton, Ohio, June 20, 1943. Reviewed by Margaret Ann Ahlers.

The author of Rebecca, Jamaica Inn, and Frenchman’s Creek has achieved a work of broad scope and dramatic power; she has created a fine novel on considerably larger scale than her previous ones.

Du Maurier writes with much skill; her characters are never hard to discern and in this book, she pictures the Irish countryside and the dominant snow-capped Hungry Hill with most enjoyable clarity.

The Broderick family were aristocratic landowners whose arrogance and prosperity continually aroused the resentment of their tenants, the Donovans, who looked upon them as intruders. For generations, the poor Irish who lived in Doonhaven had considered that they themselves were the first holders of the land from which the Brodricks derived their wealth.

And while when face to face the Donovans showed proper respect for their landlord, it was the undercurrent of bitterness which eventually cropped out and made trouble. In the early years of the feud it was a Donovan who shot the father of John Brodrick, owner of the fine estate of Clonmere, one of the chief scenes of the story.

The old trouble flares again when at the very beginning of the novel, John Brodrick makes known his decision to open a copper mine in the side of Hungry Hill and take for himself and his family the hidden wealth he knew to be there.

The news spread fast and though the new mine would mean occupation  for all the men and boys of the vicinity, the announcement was not well received. When John Brodrick met Morty Donovan on the road the day the agreement was signed with his partner, Robert Lumley, Donovan was frank to say to his landlord that no good would come of the mine.

“You should have asked permission of the hill first, Mr. Brodrick,” he said. “Aye, you can laugh, you, with your Trinity education and your grand progressive ways, and your sons and daughter that walk through Doonhaven as though the place was built for their convenience, but I tell you and your mine will be in ruins, and your home destroyed, and your children forgotten and fallen maybe into disgrace. But this hill will be standing still to confound you.” 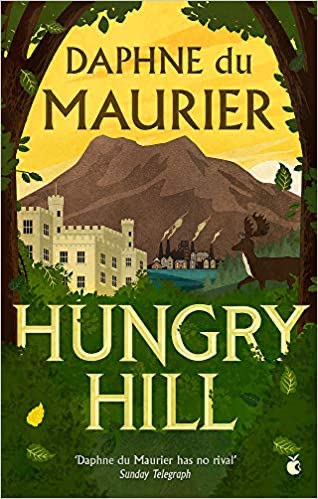 And so the mine on the side of Hungry Hill was started in spite of the opinions of the neighborhood. A Cornishman named Nicholson was secured as captain of the mine and with him he brought some of his own people to work as miners.

That furnished reason for trouble since the Donovans and their friends were bitter against strangers collecting wages from wealth, which, according to their views, belonged solely to them.

The Broderick mine gave up its rich copper and money poured into the family till, but some dark shadow hung over Hungry Hill, a dark shadow under cover of which, something always went wrong.

“Copper John” — as he came to be called — his daughters, Barbara, Eliza, and Jane, and his sons, Henry and John, were caught in an odd chain of circumstances which seemed to be the results of the Donovans’ hatred in league with the mountain’s own resentment against intrusion.

Tragic events occur, the mine cost the life of Jane, and Clonmere Castle was a smoldering ruins while Hungry Hill watched silently.