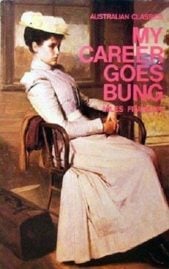 Miles Franklin (1879 – 1954) is best known for her first novel, My Brilliant Career. Published in 1901, when the author was just 21, it’s a semi-autobiographical story of a teenage girl growing up in the Australian bush who longs to break free as her own person.

Just after the novel’s publication and early success she wrote only sporadically, having become involved in World War I efforts and the woman suffrage cause.

During this period, she wrote a sequel to My Brilliant Career titled My Career Goes Bung, finishing it around 1915 –1916. But it proved too far ahead of its time and wasn’t published until some decades later.

In the 1920s, Franklin wrote a set of historical novels set in the Australian bush and published them under the odd pseudonym “Brent of Bin Bin.” She worried that nothing she did would ever live up to the success of My Brilliant Career. She was also daunted by the prospect of negative reviews and believed that using a nom de plume would shield her from them.

Under this pseudonym, Up the Country (1928), Ten Creeks Run (1929), and Back to Bool Bool (1931) came out in quick succession. This suite of Brent of Bin Bin novels would grow to six volumes, but the remaining three didn’t appear until the 1950s. 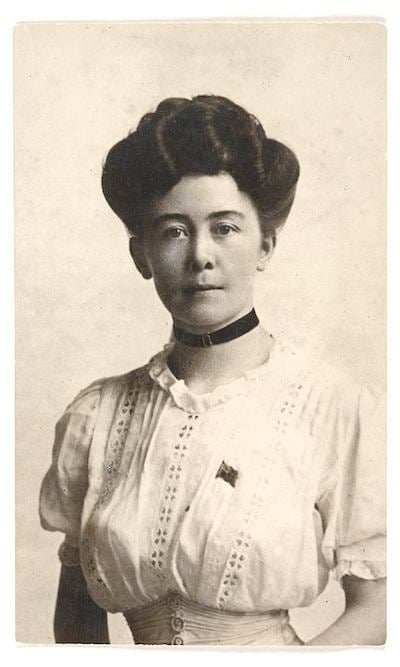 By the time the eagerly received My Career Goes Bung was published in 1946, there was some suspicion that “Brent of Bin Bin” might have been written by the same pen. Here is one such article from that year that posited this theory:

From the original article in The Age, Melbourn, Australia – August 1946: Recently, a Melbourne literary society held an informal discussion on the subject, “Who is ‘Brent of Bin Bin?’”

The identity of the author of Up the Country, Ten Creeks Run, and Back to Bool Bool has never been clearly established – at least not publicly.

Some speakers professed to have conclusive evidence that the pseudonym is that of Miles Franklin; others were equally positive that “Brent” was the pen name of a writer living in England, though it was conceded that “he” and Miss Franklin might have collaborated. The discussion did little more than deepen the mystery. 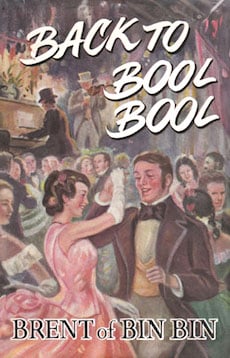 It is possible that Miss Franklin does not relish these attempts to pry into her secret. She has stated, sometimes obliquely, sometimes definitely, that she is not “Brent.” Obviously, she has a valid reason for maintaining secrecy. But it is perhaps only natural that readers who have noticed any resemblances between her own and “Brent’s” books – similarities of style, content, locale – should at least be curious.

A pointer to “Brent’s” identity might be given in Miles Franklin’s latest book, My Career Goes Bung. Her first book, My Brilliant Career, was published in 1901 by William Blackwood and Sons (who also published the “Brent” series).

A fictitious autobiography of “Sybylla Melvyn,” a young Australian bush girl, from childhood to her 21st year, it was a remarkable achievement for a bush-bred girl of sixteen.

In My Career Goes Bung, Sybylla now reappears to tell of the trouble in which that first literary venture involved her. When her English publishers, “Messrs. McMurwood,” suggest a new edition of her first book, she declines the offer, adding:

“In the future I could have a nom de plume, carefully guarded, so that my attempts could be taken on their own demerits without the impetus of scandal …” 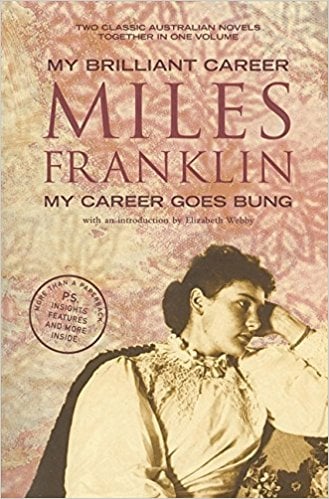 My Career Goes Bung on Amazon

Some Everyday Folk and Dawn and more

Miles Franklin’s second book, Some Everyday Folk and Dawn, appeared in 1909. Then followed an interval of 22 years before her next novel, Old Blastus of Bandicoot, was published. During part of that period, she was in America and England. The “Brent of Bin Bin” books appeared between 1928 and 1931, and generally received higher commendation than Miss Franklin’s work.

Even her prize-winning chronicle novel, All That Swagger (1936), was compared adversely to the “Brent” series by some critics – a point in which she has not failed to note.

This is not the place to attempt an exhaustive inquiry into the relationship, nor to comment on the implications, but is it not conceivable that the paragraph quoted might have some significance? But perhaps Sybylla alone could provide the answer!

My Career Goes Bung is, as the author says, “an irrefutable period piece … equally as autobiographical as my first printed piece; no more, no less.” Sybylla tells how she secretly wrote the manuscript of My Brilliant Career, submitted it to “our greatest Australian author” — that was Henry Lawson, who wrote the preface to My Brilliant Career. Some time later she was astonished to receive “six presentation copies” of the book from the overseas publisher.

Then the trouble began! The inhabitants of ‘Possum Gully, Stony Flat, Stringbark Hill and adjacent districts identified themselves with her imaginary characters. It was generally held to be “indelicate” for a young girl to have written a book at all. Neighbors were offended, the church shocked, her family commiserated with.

But the book was read, and eventually, the young author received an invitation to stay with Sydney friends.

In Sydney, Sybylla was introduced to “society,” lionized as a “budding genius.” However, she survived the month’s ordeal — and the attention of a number of amorous gentlemen — and returned to the drought-stricken dairy farm near Goulbourn, much richer for the experience, though feeling that her “career had gone bung.”

There is much lively humor (and some delicious satire) in this little book, an intense love of country, an intolerance of all forms of humbug and “un-Australian” attitudes. The manuscript of My Career Goes Bung, rescued from the depths of an old trunk, was designed as a “corrective” to the earlier work.

What faults there are may be attributed to the inexperience of this high-spirited and rebellious 20-year-old bush girl writing in the early part of the century.

More about My Career Goes Bung by Miles Franklin

More about “Brent of Bin Bin”