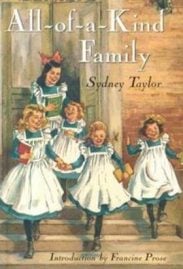 All-of-a-Kind-Family by Sidney Taylor (1951) is the first of a series of children’s books about the everyday lives of a tight-knit Jewish family at the turn of the 20th century. Ella, Henny, Sarah, Charlotte, and Gertie are young sisters who live with their parents in the Lower East Side of New York City.

This story and its sequels smooth the rough edges of immigrant life, but the warmth and strength of the family unit sends the message that love and mutual respect can overcome many of life’s challenges. The girls occasional bicker, but their love and loyalty for one another is evident.

The five sisters love to do everything together, whether it’s going to the library to choose each week’s treasured books, interacting with peddlers in Papa’s junk shop on rainy days, or going on the rare outing with wise, patient Mama.

This book is notable for its emphasis on Jewish holidays and traditions, presenting them as joyous occasions without resorting to tired stereotypes. In the few decades following the first of the series in 1951, the All-of-a-Kind Family books were the best known children’s works depicting Jewish life in America.

Sydney Taylor (1904 – 1978) was born Sarah Brenner to Jewish immigrant parents, and like her subjects, grew up in the Lower East Side of Manhattan. She even used the real names of her sisters in the fictionalized account (though she herself was Sarah in the books and later changed her name to Sydney). 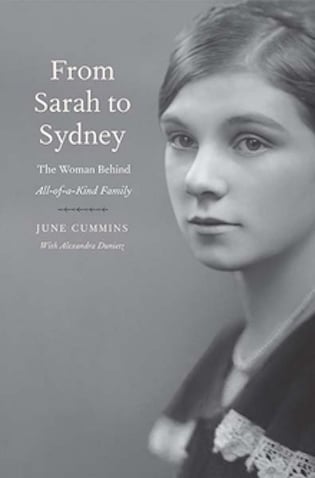 Until now, not a lot was known about her despite the popularity the All-of-a-Kind series. That may change thanks to a 2021 biography, from Sarah to Sydney by June Cummins and Alexandra Dumietz. In a presentation titled “Who Was Sydney Taylor?” Cummins wrote:

“As a grown woman, Sydney remembered the early days of her family’s life on the Lower East Side. Although they were poor, like most Jewish immigrants, they had many happy times. Just like the girls in the books, Sydney and her sisters were ‘five little girls [who] shared one bedroom—and never minded bedtime. Snuggled in our beds we would talk and giggle and plan tomorrow’s fun and mischief.’”

A review in The Nashville Banner (November 16, 1951) by Kay Early Russell, also confirms the series inspiration from the author’s real-life experiences:

“The author of All-of-a-Kind-Family is also a wife the mother of a teenage daughter, Jo. Jo loved to hear stories of her mother’s youth, and the tales of good times with her four sisters. Inspired by her only daughter’s enthusiasm, Mrs. Taylor set her tales to paper and All-of-a-Kind-Family was born.

The author has a keen insight into situations that appeal to children, and is able to present them in a satisfying way. It’s a happy, warm story of five little girls who live with their parents (of modest means) in a four-room flat on New York’s Lower East Side.”

The richness of Jewish heritage

Sydney Taylor’s biography on Jewish Women’s archive emphasized how artfully she depicted Jewish family life and traditions in the series:

“In All-of-a-Kind Family, Mama and Papa love their girls dearly and teach them to be good to one another, to their parents, to their neighbors and friends, and to their faith. Taylor gently integrates the rich traditions and heritage of Judaism into this family’s life: The reader learns about the celebration of Purim, Passover, Sukkot, and Hanukkah not as an aside but as a central part of religious Jewish life.

Such activities as attending shul (synagogue), making a sukkah, and celebrating the weekly Sabbath are interspersed with all of the kitchen activities typical of an observant Jewish household—rolling dough for teyglekh, making gefilte fish, baking challah.” 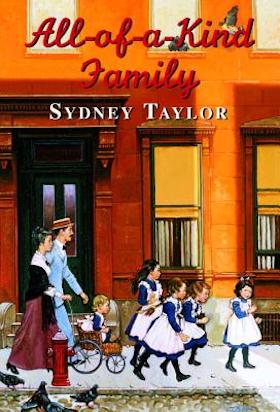 All-of-a-Kind Family on Bookshop.org* and Amazon*

The Charles W. Follett award for “worth contributions to children’s literature” has been awarded this year to All-of-a-Kind-Family by Sydney Taylor, a newcomer to the field of children’s books.

The five little heroines, ranging in age from four to twelve, might be described as the East Side’s prototype of Little Women.

Ella is the eldest, in the first throes of romantic puppy love; Henrietta, the ten-year-old, is the madcap of the family, able to turn a tragedy like getting lost at Coney Island into an ice cream binged financed by good-natured policemen; Sarah is the conscientious one; and six-year-old Charlotte and little Gertie are at the delicious age when it takes half an hour to select two cents’ worth of penny candy.

Since Papa runs a junk shop and business is only fair-to-middling, there is more love than money in the little apartment. Chores are shared, along with joys and ceremonies of the great procession of Jewish holidays, and descriptions of the special dishes that Mama prepares are enough to make the mouths of both adult and child readers water.

When work lags, Mama thinks up ingenious games with buttons and bright pennies to make chores go faster. And when a rainy day forces them to stay indoors, what better haven could any little girls find than the crowded junk shop. There, the peddlers sit around the stove and a newly-arrived stash of discarded books yields collections of fairy tales and paper dolls to reward the patient little searchers.

The eight-year-old and up reader for whom this book is intended will find herself completely enamored with its little heroines. Their adventures are natural, funny, and heartwarming, and the family atmosphere that Mrs. Taylor has recreated so well from her own remembered childhood combines the brightness of reality with the glow of love.

The only note of implausibility, but one of which romantic-minded pre-teens will heartily approve, is the romance between Charlie, the handsome misplaced junkman and Miss Allen, the pretty young librarian.

Without being aware of it, young readers will absorb attitudes as well as facts from All-of-a-Kind-Family. Along with a fascinating picture of the East Side food markets in the old days, and some vivid descriptions of Jewish holidays, the child reader will gain an appreciation for children who observe different customs. Altogether, a wholesome experience as well as an enjoyable one.