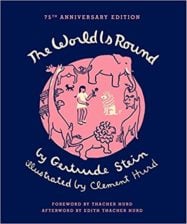 From the 1988 North Point Press edition of The World is Round (1939):  Gertrude Stein’s only children’s book tells the story of Rose, a little girl determined to find her place in a “World that was round and you could go on it around and around.”

Rose’s search for identity leads her to friendships with dogs, rabbits, lions, and other children, to carve ‘Rose is a Rose is a Rose’ around the trunk of a tree, and finally on a quest (accompanied only by a blue garden chair) to the top of a mountain, where “everywhere she should see everywhere and she would sit on the chair, yes there.”

Much more than a children’s book

The World is Round is much more than a book for children: Stein’s inimitable prose style finds the perfect foil in this child’s mercurial mind with its sudden impulses and ever-changing conception of the world.

An Afterward written by Edith Thatcher Hurd illuminates the events surrounding the original 1939 publication of the book and offers rare photos of the real Rose with her friends Miss Stein and the dogs Pépé and Love. Included also is the correspondence between Stein and illustrator Clement Hurd, whose charming linoleum blocks grace this publication.

A classic reminder of Gertrude Stein’s gifts of humor and imagination, The World Is Round is an invaluable treat for readers of all ages and is sure to delight even the most discriminating child. 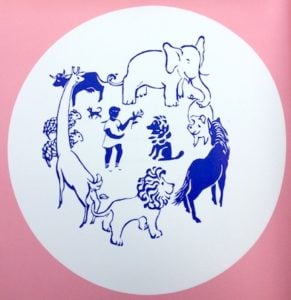 The World is Round Chapter 1: Rose is a Rose

Once upon a time the world was round and you could go on it around and around.

And then there was Rose.

… and continues thusly for many pages and many chapters until it is concluded, in Stein’s inimitable fashion, that “the world just went on being round.” 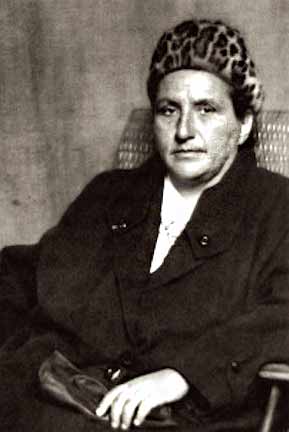 More about The World is Round by Gertrude Stein