Remembering the What Katy Did Series by Susan Coolidge 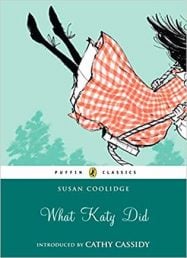 There are some books from one’s schoolgirl years that stay with you, and the What Katy Did series by Susan Coolidge (1835–1905) certainly falls into that category for me. I read and re-read those books through many vacations. Before realizing it, the actions of favorite characters begin to have an effect on me, as the reader.

The American author of the What Katy Did series (five books in all) was born Sarah Chauncey Woolsey but gained fame with her pen name, Susan Coolidge. The first book of her Katy Did series was published in 1872.

What Katy Did deals with the adventures of twelve-year-old Katy Carr, who lives with her Aunt Izzie (after having lost her mother at the age of five), her father, Dr. Carr (a hardworking doctor, who is away from home for long spells), three sisters, and two brothers. Her friend, Cecy, also plays an important role in the first novel.

A typical gangly and gauche tomboy

Many twelve-year-olds would most likely identify with Katy at that age — a gangly tomboy who manages to tear her dresses regularly and resents the very idea of being told to be “a good little girl,” by Aunt Izzie when she is actually dreaming about doing “something grand.”

Of course, she is also full of self-doubt about being gauche in appearance and feeling unloved. This preoccupation with not looking good is probably part of growing pains but when you think back, you wonder whether the regular descriptions about people’s looks could be internalized by preteens.

To the despair of Aunt Izzie, Katy is always tearing about the place and getting into fights with her siblings or her friend, Cecy, even as she cooks up wild games for them all to play. All this undergoes a change when Katy falls off a swing and suffers a spinal injury, with the possibility of being laid up in bed for the rest of her life.

Here’s where my favorite character, Katy’s Cousin Helen, enters the picture and turns out to be a great emotional bulwark. Herself an invalid who uses a wheelchair, Cousin Helen is the embodiment of kindness and good cheer and helps Katy negotiate her condition and come to terms with it by attending the “School of Pain.”

There is a transference of Cousin Helen’s sweetness to Katy, and much as one might identify with the naughty Katy, even as a young reader, it’s natural to feel admiration for Cousin Helen’s goodness in the face of adversity. This could well be the dichotomy of human nature, which wants to break free of constraints and expectations, and at the same time embrace altruism and goodness.

Fortunately, Katy recovers from her injury, and towards the end of this book becomes all that Aunt Izzie wishes her to be. The fire of imagination hasn’t left her, but she is no longer at loggerheads with her siblings. She is a calmer person, more capable around the house. A nineteenth-century writer of stories for young girls can’t be faulted for ending a story on a note of conformity, because that was the expected outcome for those times.

What Katy Did at School

The second of the series, What Katy Did at School (1873), follows the still high-spirited Katy through her time at a New England boarding school. There, she and her sister, Clover, get used to making a slew of new friends, participating in schoolgirl capers, and confronting issues of ethics. Katy has to face unjust accusations and learn how to deal with them.

The letters from home and constant reference to their large family help Katy and Clover confront some rough times. Moral lessons come into play, but are handled in a way that holds the attention of young adults. The story moves forward with notions of what young women of those times were expected to be, but the author manages to hold the interest of later generations of readers nevertheless.

What Katy Did Next

The final book in the series, What Katy Did Next (1886) becomes a lot more exciting, as a widowed friend of the family, Mrs. Polly Ashe, invites Katy to join her for a vacation to Europe as a traveling companion for herself and her daughter, Little Polly.

Reluctant at first to leave her large family behind, Katy, now twenty-one, is persuaded by her father to make the trip, and Dr. Carr gives her three hundred dollars for her travel expenses. Before her travels, Katy makes a stop at Boston where all the girls from the school at Hillsover have a grand reunion. Soon after, it’s time for departure to England, accompanied by a bout of seasickness.

The sights and sounds of Europe make for interesting reading, as also the discovery that “good weather” in England means the absence of rain and that the muffins that sound so scrumptious in the Dickens’ novels are disappointing when actually tasted.

This is the book in which Katy discovers the true love of her life, Mrs. Ashe’s brother. He must have been a memorable character, as I was surprised that so many years after reading the book, I could still recall his name, Ned Worthington.

Supposedly, the Katy Did series was modeled on Coolidge’s own (Woolsey) family, with Katy inspired by Susan herself, lending the stories their magic. The Little Carrs were based on the characters of her four siblings. The family house in Cleveland, Ohio, is said to have provided the setting for the home of the Carrs in the first book.

Many readers have identified with Katy Carr, perhaps explaining why this series may still be attracting the attention of an international audience of young readers. 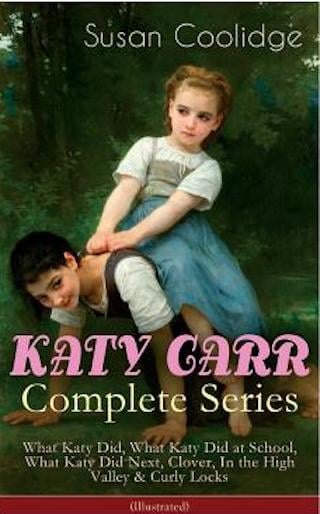 More about the What Katy Did series

Two related books about Katy’s younger siblings followed the trilogy of What Katy Did books. These were Clover and In the High Valley.

Ongoing book, film, and television adaptations have kept this series before readers’ (and viewers’) eyes, long after the original books were published. The first adaptation for media was the 8-part UK series aired in 1962. Katy (1972) was the first feature film adaptation, made and released in the UK as well. What Katy Did was a 1999 American film starring the versatile actress Alison Pill.

Katy by Jacqueline Wilson (2015) is a contemporary retelling in book form. This, in turn, became a British television adaptation that aired in 2017.

Susan Chauncey Woolsey, writing as Susan Coolidge, is by far best remembered for the What Katy Did series. But she was an incredibly prolific author of works for children, including novels, short stories, and poems. Here is a complete listing of her works.