No Signposts in the Sea by Vita Sackville-West (1961) 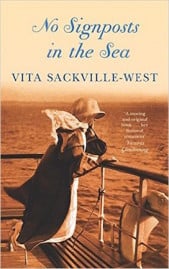 From the 1961 Doubleday edition of No Signposts in the Sea by Vita Sackville-West: In this brilliantly fashioned short novel by Vita Sackville-West, one of the most distinguished of British writers, a famous journalist accompanies an attractive widow on a leisurely voyage and discovers the raptures and torments of an apparently unrequited love.

His passion mounts even as he must face the fact that his beloved is unattainable; for, as the reader gradually learns, it is not just a matter of his humble origins, nor of her reticence and seeming preference for a likable — and highly eligible — fellow passenger. It is that he himself has only a brief time to live.

With his senses sharpened by this secret knowledge, the sights and experiences of the cruise take on a jewel-like quality, overcast by a sense of impending tragedy.

No Signposts in the Sea is a beautifully and skillfully written story which probes deeply into human frailties, into the nature of adult love, and into the contradictions of the spirit and the flesh. It does so hauntingly and with civilized compassion.

More about No Signposts in the Sea by Vita Sackville-West