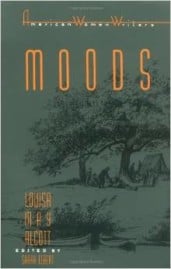 Moods by Louisa May Alcott was this beloved American author’s first novel (that is, the first that she published under her own name). It came out in 1864 — four years before her breakout Little Women.

The novel unconventionally presents a “little woman” a true-hearted abolitionist spinster, and a fallen Cuban beauty, their lives intersecting in Alcott’s first major depiction of the “woman problem.”

Sylvia Yule, the heroine of Moods, is a passionate tomboy (as was the author herself) who yearns for adventure. The novel opens as she embarks on a river camping trip with her brother and his two friends, both of whom fall in love with her. These rival suitors, close friends, are modeled on Ralph Waldo Emerson and Henry David Thoreau.

The simple title of this book, in fact, seems to be attributed to Emerson, who Alcott considered a mentor, and who was a close family friend of the Alcott family. In the front matter of the book, he is quoted: “Life is a train of moods like a string of beads; and as we pass through them they prove to be many colored lenses, which paint the world their own hue, and each shows us only what lies in its own focus.”

Aroused, but still “moody” and inexperienced, Sylvia marries the wrong man. In the rest of the novel, Alcott attempts to resolve the dilemma she has created and leaves her readers asking whether, in fact, there is a place for a woman such as Sylvia in a man’s world.

In 1882, eighteen years after the original publication, Alcott revised and republished the novel. Her own literary success and the changes she helped forge in women’s lives now allowed her heroine to meet, as Alcott said, “a wiser if less romantic fate than in the former edition.” 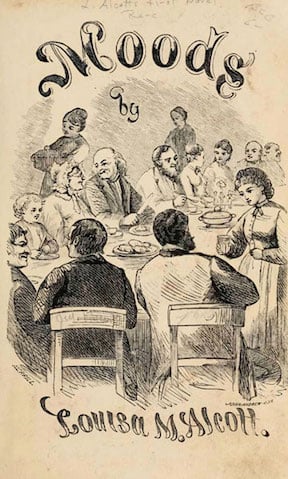 Moods by Louisa May Alcott on Amazon*

This new volume contains the complete text of the 1864 Moods and Alcott’s revisions for the 1882 version, along with explanatory notes by the editor., Louisa May Alcott’s first novel, was published in 1864, four years before the best-selling Little Women.

The novel unconventionally presents a “little woman” a true-hearted abolitionist spinster, and a fallen Cuban beauty, their lives intersecting in Alcott’s first major depiction of the “woman problem.” 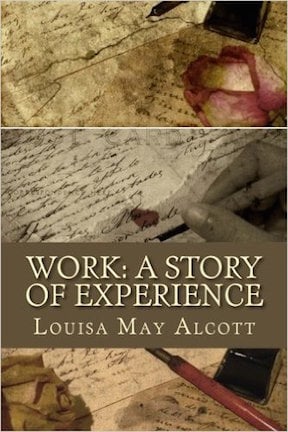 See also:Work: A Story of Experience

More about Moods by Louisa May Alcott

This segment of chapter one demonstrates prose that is self-conscious and often overwrought. There is little hint of the more conversational, relatable prose and characterizations that would come just four years later in Little Women. Note, long paragraphs of  the original have been broken up for easier viewability.

Chapter 1: In a Year

The room fronted the west, but a black cloud, barred with red, robbed the hour of twilight’s tranquil charm. Shadows haunted it, lurking in corners like spies set there to watch the man who stood among them mute and motionless as if himself a shadow.

His eye turned often to the window with a glance both vigilant and eager, yet saw nothing but a tropical luxuriance of foliage scarcely stirred by the sultry air heavy with odors that seemed to oppress not refresh. He listened with the same intentness, yet heard only the clamor of voices, the tramp of feet, the chime of bells, the varied turmoil of a city when night is defrauded of its peace by being turned to day.

He watched and waited for something; presently it came. A viewless visitant, welcomed by longing soul and body as the man, with extended arms and parted lips received the voiceless greeting of the breeze that came winging its way across the broad Atlantic, full of healthful cheer for a home-sick heart.

Far out he leaned; held back the thick-leaved boughs already rustling with a grateful stir, chid the shrill bird beating its flame-colored breast against its prison bars, and drank deep draughts of the blessed wind that seemed to cool the fever of his blood and give him back the vigor he had lost.

A sudden light shone out behind him filling the room with a glow that left no shadow in it. But he did not see the change, nor hear the step that broke the hush, nor turn to meet the woman who stood waiting for a lover’s welcome.

An indefinable air of sumptuous life surrounded her, and made the brilliant room a fitting frame for the figure standing there with warm-hued muslins blowing in the wind.

A figure full of the affluent beauty of womanhood in its prime, bearing unmistakable marks of the polished pupil of the world in the grace that flowed through every motion, the art which taught each feature to play its part with the ease of second nature and made dress the foil to loveliness.

The face was delicate and dark as a fine bronze, a low forehead set in shadowy waves of hair, eyes full of slumberous fire, and a passionate yet haughty mouth that seemed shaped alike for caresses and commands.

A moment she watched the man before her, while over her countenance passed rapid variations of pride, resentment, and tenderness. Then with a stealthy step, an assured smile, she went to him and touched his hand, saying, in a voice inured to that language which seems made for lovers’ lips—

“Only a month betrothed, and yet so cold and gloomy, Adam!”

With a slight recoil, a glance of soft detestation veiled and yet visible, Warwick answered like a satiric echo—

“Only a month betrothed, and yet so fond and jealous, Ottila!”

Unchilled by the action, undaunted by the look, the white arm took him captive, the beautiful face drew nearer, and the persuasive voice asked wistfully—

“Was it of me you thought when you turned with that longing in your eye?”

“Was it of a fairer or a dearer friend than I?”

The black brows contracted ominously, the mouth grew hard, the eyes glittered, the arm became a closer bond, the entreaty a command.

She laughed low to herself, and the mobile features softened to their former tenderness as she looked up into that other face so full of an accusing significance which she would not understand.

“I have waited two long hours; have you no kinder greeting, love?”

“I have no truer one. Ottila, if a man has done unwittingly a weak, unwise, or wicked act, what should he do when he discovers it?”

“Repent and mend his ways; need I tell you that?”

“I have repented; will you help me mend my ways?”

“Confess, dear sinner; I will shrive you and grant absolution for the past, whatever it may be.”

“How much would you do for love of me?”

“Anything for you, Adam.”

“Then give me back my liberty.”

He rose erect and stretched his hands to her with a gesture of entreaty, an expression of intense desire. Ottila fell back as if the forceful words and action swept her from him. The smile died on her lips, a foreboding fear looked out at her eyes, and she asked incredulously—

If he had lifted his strong arm and struck her, it would not have daunted with such pale dismay. An instant she stood like one who saw a chasm widening before her, which she had no power to cross. Then as if disappointment was a thing impossible and unknown, she seized the imploring hands in a grasp that turned them white with its passionate pressure as she cried—

“No, I will not! I have waited for your love so long I cannot give it up; you shall not take it from me!”

But as if the words had made the deed irrevocable, Warwick put her away, speaking with the stern accent of one who fears a traitor in himself.

“I cannot take from you what you never had. Stand there and hear me. No; I will have no blandishments to keep me from my purpose, no soft words to silence the hard ones I mean to speak, no more illusions to hide us from each other and ourselves.”