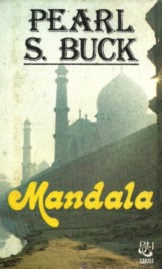 Mandala: A Novel of India by Pearl S. Buck (1970) is unusual among this author’s novels, which are most often set in China or the U.S. In this story, Maharana Prince Jagat and his wife, Moti, learn that that their only son, Jai, has been killed by the Chinese in a border dispute.

The distraught parents wish to bring their son’s spirit home. It’s an exploration of Eastern and Western thinking, how they overlap, and the ways in which they conflict. The plot weaves in the mysticism and mysteries of life in India in a time and place that was contemporary to when the author wrote this book.

Plot overview and characters of Mandala

The 1970 John Day edition of Mandala offered this brief overview of the plot and characters:

Mandala is one of Pearl S. Buck’s rare novels about India. Centering her story around a modern princely family of the New India, she explores the mysticism that pervades everyday life there. Extrasensory perception, reincarnation, and sprits are very real concerns of the Maharana Prince Jagat and his family.

Quest for a son’s spirit

Prince Jagat is the virile descendant of a warrior people. For the first forthy years of his life, he has been content to expend his passion on tiger hunts. Political events strip him of his titles and most of his wealth, but not of his sense of responsibility to the local villagers. As the novel opens, he is embarking upon a scheme to turn an opulent but ghost-ridden lake palace into a luxury hotel for foreign tourists.

When news reaches him that his only son, Jai, has been killed by the Chinese in a border skirmish, his life changes even more. Convinced that Jai’s sprit lives, Jagat’s wife, Moti, will not rest until he sets off to find their son.

The journey is a fateful one, for it involves Jagat with a beautiful and mysterious young American woman, Brooke Westley. The fatal attraction between East and West, man’s search for completion, and the awesomeness of Time affect all the characters in Mandala:

Moti, whose ingrained passivity deserts her when she encounters the compelling presence of an English priest

Father Francis Paul, whose zealous missionary work among low-caste Bhils does not prevent him from concerning himself with the soul of the fascinating Maharani

Veera, Jagat and Moti’s daughter who flirts with the idea of refusing the marriage arranged for her, but can’t decide between tradition and emancipation.

Pearl Buck brings to Mandala her unique knowledge and sympathy with Eastern peoples. With a sure touch, she evokes the sense of mystery and never-ending life in the mother country of ancient Asia.

See this post on Crossing Borders for a much more detailed rundown of the characters. 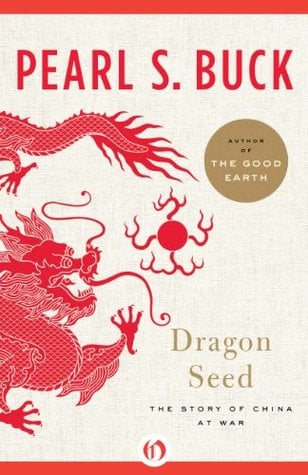 From the original review by Jeanne Rose of Mandala: A Novel of India by Pearl S. Buck, October 25, 1970, in the Baltimore Sun:

In the East that Pearl S. Buck has loved so well and so long, more changes have come than those brought by war. China, which she once knew by heart, sometimes appears not to have saved a vestige of its past. And the Bamboo Curtain shuts off clear knowledge of what happens there.

So Buck has turned to a country more accessible, though in its own way unfathomable — India, where old and new both blend and struggle together.

Violence and passion have their place in Mandala, but it is fundamentally a gentle story, like the dreaming, mystical countryside it depicts. For though “Mandala” means the Universe, this novel considers only a small part even of the world that is India. It concentrates on just one family — the princely household of Jagat, Rajput of Rajasthan.

Peasant and villagers fill in the background, but Buck has only minimal interest in them; her attention focuses on Jagat, the handsome ruler who has lost his princedom but not his responsibilities, and on how the new ways change his life and that of his family.

The Rajput is attempting to recoup his finances by converting one of his palaces, romantically situated in the center of a lake, into a luxury hotel for tourists. This project attracts foreigners: the American hotel man Bert Osgood, who soon imagines he loves Jagat’s beautiful daughter Veera; and Brooke Westley, the enigmatic young woman seeking she know not what, who stays alone in the hotel while it is being renovated.

Fiercer changes come from without: The Chinies invade on the northern border and Jagat’s son Jai goes to fight them and is killed. His mother, Moti, refusing to believe her son is dead, sends Jagat to search all of India for him — and Brooke, and American heiress, goes along.

Love comes, unsought but inevitable. Jagat and Brooke accept it blindly, unwilling to guess where it may lead. A lama tells them that Jai may appear again in another incarnation; in their happiness they half doubt, half accept his mysterious prediction.

In the end, the foreigners have gone, all except the English priest to whom Moti had turned in vain for the love her husband had never given her. But these separations are not tragedies. As the author says, “In India there are no unhappy endings, for there is no end.”

Life never ceases; it goes on into some other realm. 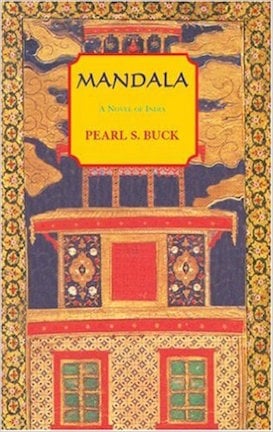 More about Mandala: A Novel of India by Pearl S. Buck