Dragons in the Waters by Madeleine L’Engle (1976) 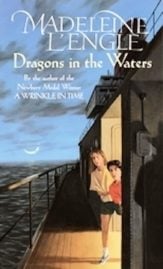 From the 1976 Farrar, Straus and Giroux edition of Dragons in the Waters by Madeleine L’Engle: Readers of Madeleine L’Engle’s novel The Arm of the Starfish will recall Poly and Charles O’Keefe and their amateur detective friend, Canon Tallis. In Dragons in the Waters, the O’Keefes are traveling with their scientist father by freighter to Savannah, Georgia, to Venezuela.

Among their fellow passengers are Simon Renier, who quickly becomes their friend, and his enigmatic cousin Forsyth Phair, who with Simon is returning a family heirloom to Venezuela — a portrait of Simon Bolivar. When Forsyth Phair is murdered and the portrait stolen, all the passengers and crew become suspect.

Through strange circumstances, several of them have a motive for the murder of the man who, it develops, may be merely posing as Simon’s relative.

In a taut, suspenseful narrative, the mystery is solved with the help of Canon Tallis, but not before the reader is introduced to an array of intriguing characters and to the Quiztano Indians, a society of people whose unique way of life refreshes and enriches all who share it. 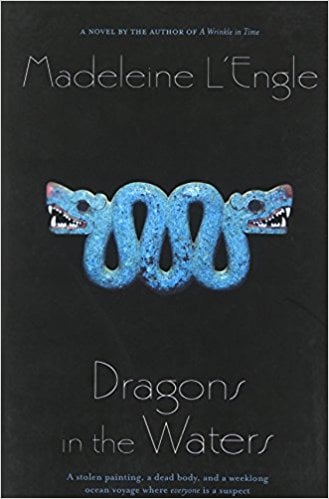 Dragons in the Waters on Amazon*

The M.S. Orion was tied up at Savannah, Georgia. Simon Renier, hands in the pockets of his old-fashioned grey shorts, looked at the small white ship with mounting excitement. He would be spending the next week on the Orion en route to Venezuela and already, standing on the pier in Savannah, he was farther away from home than he’d had ever been in his thirteen years.

It was chill this February day, with a thin rain and a biting wind. In a more sheltered part of the dock stood his cousin, Forsyth Phair, with whom he was traveling, and his great-aunt Leonis Phair, with whom he lived, and who had come with them on the train from Charleston to see them off.

More about Dragons in the Waters by Madeleine L’Engle