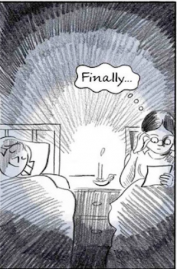 Knowing how obsessed I am with all things Brontë, my brother thoughtfully gifted me with Charlotte Brontë Before Jane Eyre, a graphic biography by Glynnis Fawkes.

Charmingly told and skillfully drawn, this book for readers of all ages focuses on the most famous of the brilliant literary sisters, Charlotte Brontë, from her early years to the moment she sends off the finished manuscript of Jane Eyre to a prospective publisher. Said she: “It’s sent. Now there’s nothing but forlorn hope.”

Of course, the legions of fans of Jane Eyre know how this turned out, though fewer readers know of the trials that beset the Brontë sisters — Charlotte, Emily, and Anne — from their childhoods to their premature deaths. Glynnis Fawkes captures their spirit and sorrows.

What drew Glynnis to Charlotte was similar to what I find compelling about her. In her postscript, Glynnis writes:

“Working on this project allowed me to rediscover a writer whose work I had enjoyed earlier in life, but I wan’t prepared for the love and respect for Charlotte I’ve gained in the course of my research.

Her persistence in pursuing her career against so many odds and facing such heartbreak, her imagination — from her earliest writing about the world of Glass Town to the shades of feeling she captures in Villette — are inspiring across the years. Charlotte’s humor and depth of thought have sustained me in writing and drawing this book.” 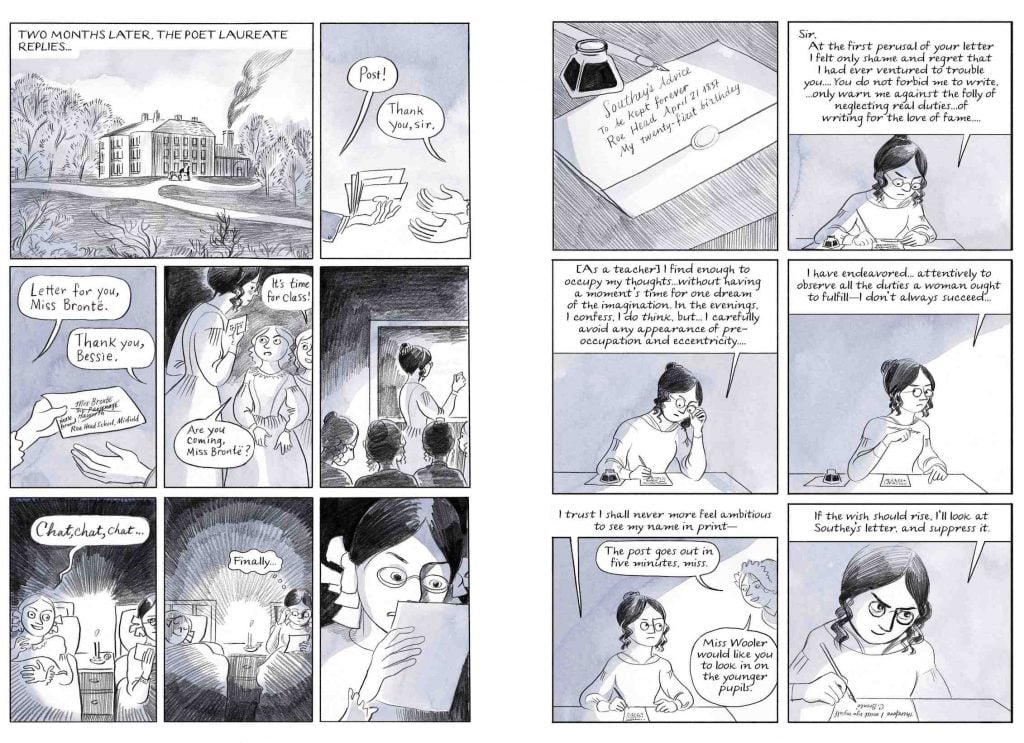 I was delighted to learn that Alison Bechdel, the renowned graphic novelist best known for Fun Home, is also a Brontë fan. She supplied the introduction to this book, writing in part:

“Fawkes’s crisp, engaging drawings bring to life the boisterous camaraderie of the Brontë siblings, the windswept moor, a grim school dormitory, even the notoriously difficult to dramatize activities of reading and writing that Charlotte spent most of her time engaged in. We travel inside the imaginary worlds the children invented and we see the tiny, infinitesimally hand-lettered magazines that Charlotte and her brother collaborated on like mad, Victorian-era ‘zinesters.”

This book is the latest in The Center for Cartoon Studies Presents, a series of biographies (including Satchel Paige, and Annie Sullivan and Helen Keller, and more) for audiences of all ages.  Images of interior pages are reprinted her with permission of the author and publisher, Disney/Hyperion ©2019. 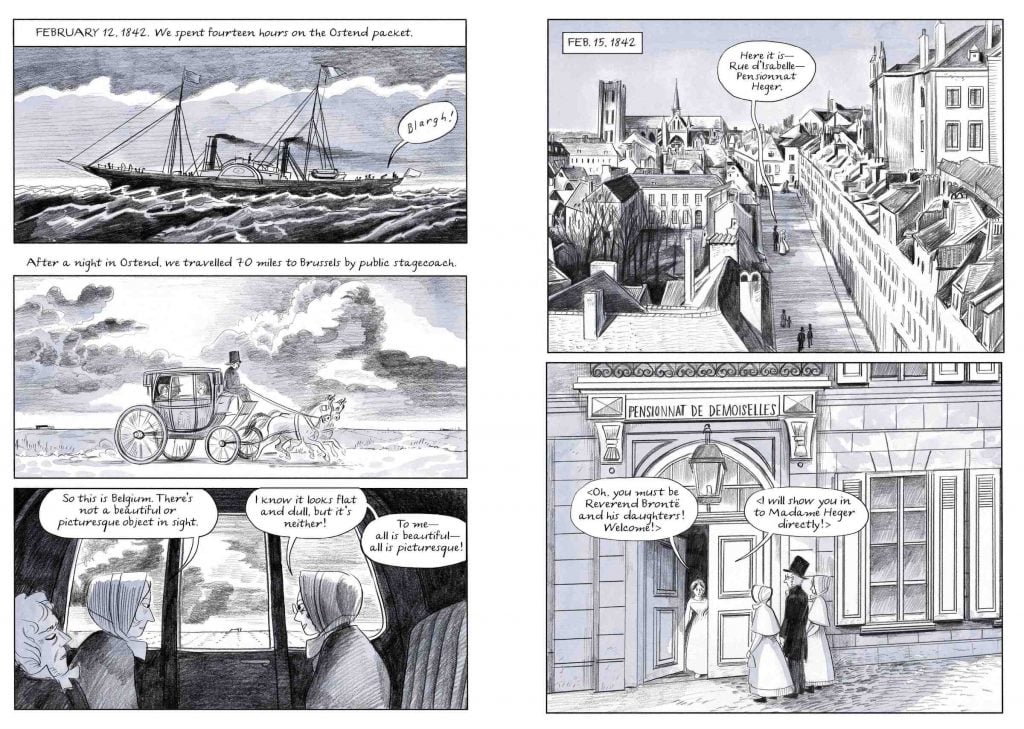 And now, here’s Glynnis Fawkes, the author and artist, describing the process behind creating Charlotte Brontë Before Jane Eyre.:

Captivated by the Brontë sisters


I chose to write about the Brontë sisters because I was captivated by their books from when I was young:  My mother read Emily Brontë‘s masterpiece, Wuthering Heights to me when I was about 13.

Many years later, in my thirties, when I was working on an archaeological excavation in Crete, I read Charlotte’s Villette and felt an immediate connection to the story of an independent woman making her way in a foreign country — despite the differences in time and place.

When my editor presented a list of subjects for the potential book, the Brontës jumped out at me. The more I read of Charlotte’s early writing, letters, and diaries, the more I appreciated her persistent spirit, sense of drama, and humor. My book centers around Charlotte for the practical reason that she left the most letters and diaries.

I began my research for the book by reading several biographies as well as re-reading all of the sisters’ novels and Charlotte’s earlier works. I wrote an outline of the events my book should include. The fact that it had a prescribed count of ninety pages kept the contents under pressure — otherwise it could have been a rambling three-hundred-page tome.

My editor, James Sturm, helped to shape the book — from the prologue when Charlotte is twenty and receives a letter from poet Laureate Robert Southey telling her, “literature cannot be the business of a woman’s life…” to the ending when Charlotte sends in her manuscript for Jane Eyre: “and the rest is history…”

Once I’d drawn thumbnail pages (roughly sketched images and hand-written text), I sent them to the publisher, who sent it to Brontë Scholar Juliet Barker for fact checking. She sent back a dozen pages of notes and revisions that I integrated into my draft.

At this point, I went for a month-long residency in France, and on my way I took a trip to the Brontë Parsonage Museum in Haworth, UK.

Visiting the Brontës’ house, and walking in their footsteps on the moors, made a tremendous difference when it came to evoking their world in the final drawings. 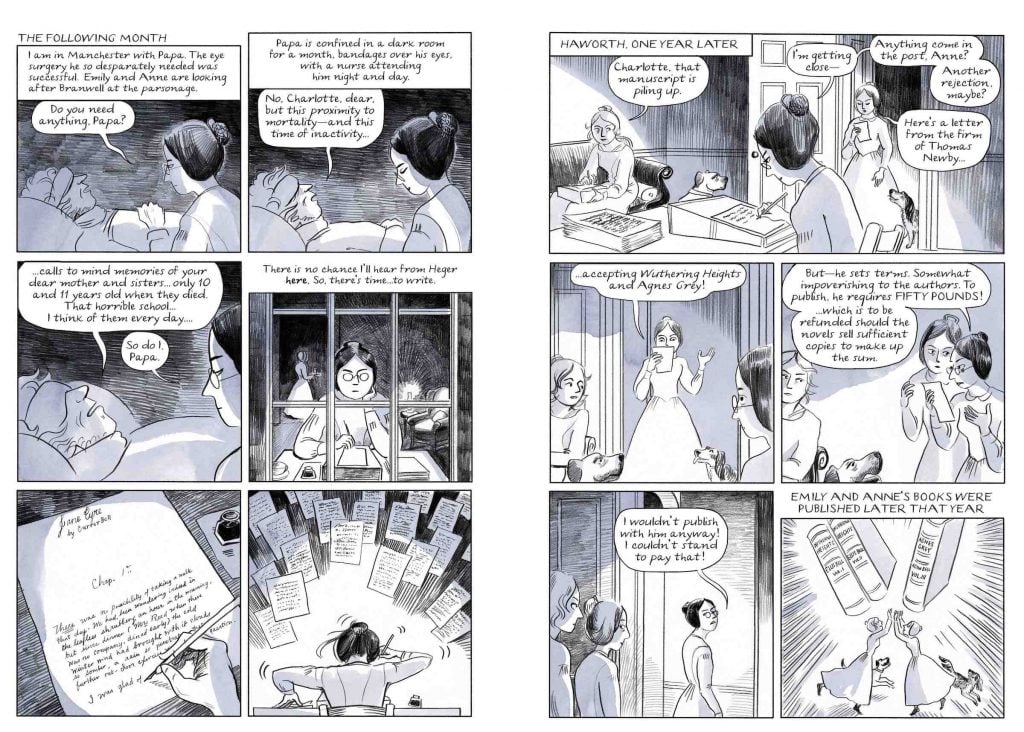 Refining the artwork, and a kinship with Charlotte

Rather than drawing the pages ink, I drew in dark (#6) pencil to achieve a more atmospheric effect. I scanned, cleaned up, and printed out my pencil drawings, then using a light table and watercolor paper, painted an ink wash.

Next, I scanned these abstract-looking pages and assembled the layers in photoshop.  This is a system I learned from Alison Bechdel — and though it seems labor-intensive, it allows for control of the separate layers: you can play with the contrast of line-drawing and the ink-wash separately. The publisher converted the ink wash to a pale purple.

I made a comic about taking her to a yoga class — she would have been amazed by it. In pondering the differences between the world the Brontës knew and ours, I drew a series for The New Yorker called 19th-Century Literature with Better Birth Control.

In creating this book, I gained a feeling of kinship for Charlotte — and in the thick of it I felt like she was with me all the time.

About Glynnis Fawkes: Glynnis Fawkes is a cartoonist and illustrator living in Burlington, Vermont. With a Fulbright fellowship, she published two books in Cyprus, then worked for about 9 years as illustrator on excavations around the Eastern Mediterranean.

Her books Greek Diary and Alle Ego won the Society of Illustrators MoCCA Arts Festival Awards in 2016 and 2017, and she has been nominated for an Ignatz Award. Her cartoons have appeared many times on The New Yorker.

Her books Charlotte Bronte Before Jane Eyre (Disney/Hyperion) and Persephone’s Garden (Secret Acres) were published in 2019.  She has received a Vermont State Arts Council Creation Grant and the School of the Museum of Fine Arts Travel fellowship toward the completion of her next book, a middle grade adventure set in Late Bronze Age Greece and Egypt.  Visit her at GlynnisFawkes.com.