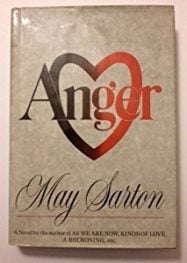 From the 1982 W.W. Norton edition:  In Anger, a novel by May Sarton, she turns once more to the exploration of the inner landscape of marriage. Here she is concerned with the differing attitudes  of men and women toward expressed emotion, the exploring in talk of hidden attitudes and fears as they are seen through the clash of two opposing temperaments.

Her protagonists are Ned Fraser, a Bostonian banker, and Anna Lindstrom, a half-Italian, half-Swedish singer on the brink of fame. Ned has been brought up to believe that allowing anger out should not be permitted and is unable to express love except to his dog, Fonzi.

Ned, Anna’s husband is described as a who insists on making love with the lights out and engages in communication only with his dog. Anna is inspired when she is presented with the idea that ‘Perhaps everything terrible in us is in its deepest being something helpless that needs help.” – in regard to her husband’s coldness. Anna is upset about her husband hiding his feelings behind his profession as a banker, not supporting her talent for singing and not saying “I Love You” back.

The main focus of Anger was to show the universality of emotions, in both men and women. She spotlights relationships and presents her subject in a similar way to that of marriage counseling. Anger, we find out is a pathway to acknowledging trauma that becomes an awareness and point of strength for the two characters. 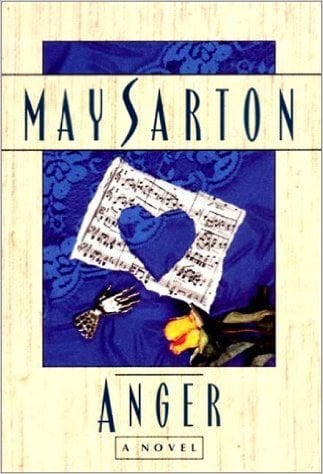 Anna is honest, violent, insecure, and believes that feelings must be expressed and brought out in to the light. Ned has fallen in love with her voice, but once they are married, is increasingly irritated and appalled by her tempestuous nature, while Anna is hurt and outraged by his crippling reserve. What results is a painful war between her ethos and his, a war that neither can win.

In he and a phrase by Rilke’s that has haunted Anna is played out in a climactic scene: “Perhaps everything terrible in us is in its deepest being something helpless that needs help.”

More about Anger by May Sarton