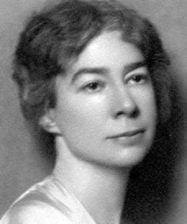 Born and raised in St. Louis, Missouri, she was the youngest of four children of wealthy parents. In delicate health throughout her childhood, she was tutored at home until the age of ten.

Despite her privileged background, and being spoiled and petted, Sara’s childhood was often lonely. She lived in a separate suite in her family’s grand homes, often left alone. The ill health of her childhood followed her throughout much of her adult life, and she often had to have a nurse-companion.

She described her fragility as “a flower in a toiling world.” Reared to believe that she was fragile and helpless, this was the attitude that dogged her throughout her life.

A slew of early successes and a Pulitzer Prize

Sara was a member of The Potters in St Louis, a group of young female artists led by Lillie Rose Ernst, from the years 1904 to 1907. The group printed their original poetry, prose, and art in The Potter’s Wheel, a monthly magazine.

In 1907, Sara’s first collection, Sonnets to Duse, and Other Poems was published; she was 23 years old at the time. Duse was a well-known actress who Sara idolized, though she never got to meet her. Sara’s second, collection, Helen of Troy and Other Poems, was published in 1911. Both were praised by critics, who noted her mastery of the lyrical style.

Her third collection of poetry, Rivers to the Sea, established itself quickly as one of her most popular works. Love Songs came out in 1917 and earned Sara the Pulitzer Prize the following year, though it was then called the Columbia Poetry Prize. 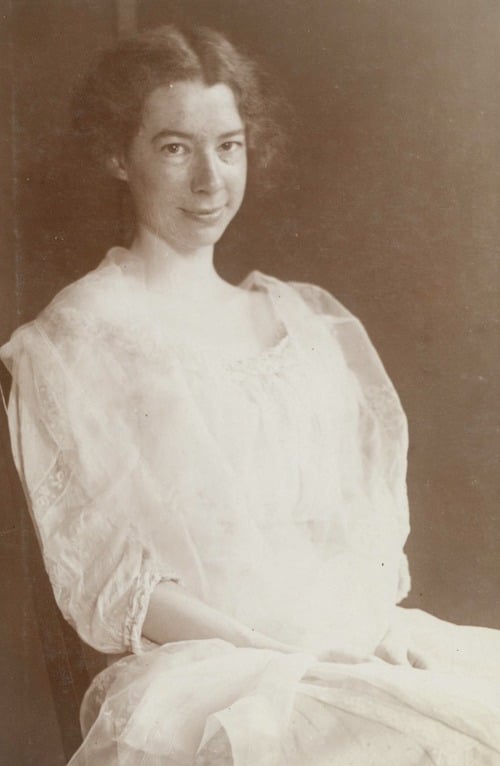 Sara had several suitors while in her twenties. The poet Vachel Lindsay was very much in love with her, but she didn’t think he could keep her in the style to which she was accustomed. He was crushed by the rejection.

In 1914 she married Ernst Filsinger, a businessman who had long admired her poetry. Soon after they married, the couple moved to New York City where they took up residence in an apartment on Central Park West.

Filsinger had to travel a great deal for business, leaving Sara alone and lonely, echoing her childhood. Despite the fact that he was generally a faithful and loving husband, her own illnesses and depressions made it difficult for her to sustain a relationship. In 1929, she moved to another state for three months in order to meet the legal criterion for divorce, without her husband’s knowledge. He was completely taken by surprise.

Despite her successes and the accolades that came with them, Sara was plagued with a lack of confidence and constant worries about her health. In A Study Guide for Sara Teasdale’s There Will be Soft Rains (2002) she’s described like this:

“She was the youngest child of a prim family who grew up believing she was a fragile, helpless girl, vulnerable to a variety of illnesses, both physical and emotional. Her perceived frailty resulted in lifelong bouts of nervous exhaustion and chronic weakness, and she remained dependent upon her parents until she married at age thirty.

… Her fondness for music was reflected in the lyric poems she wrote, most very rhythmic and many of which ended up being set to musical scores. Her work at the time centered primarily on love from a woman’s perspective, and its childlike innocence was widely acclaimed, being published in major poetry journals in Chicago, New York, and Europe.

As well-liked as Teasdale’s poetry was, the poet herself became just as admired, and she was welcomed into the circles of America’s most esteemed early twentieth-century writers. But in spite of the popularity, Teasdale was her own worst enemy. She often lapsed into depression without a definable cause and suffered a consistent lack of self-confidence, believing she would never be independent or able to live on her own.” 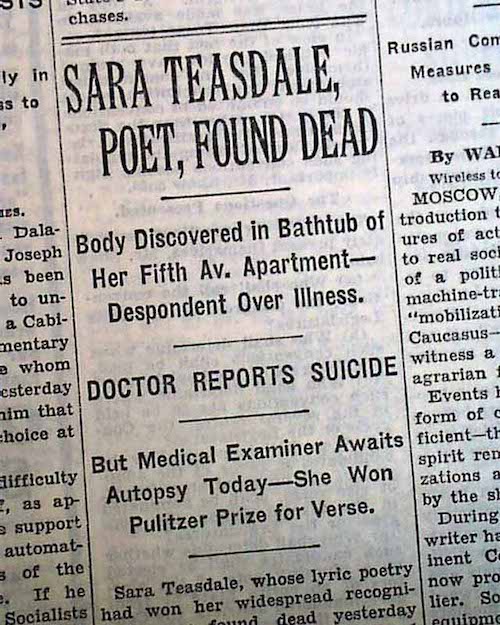 Once the divorce was final, Sara moved back to New York City. Beset with chronic pneumonia, Sara became disillusioned and depressed. No longer able to enjoy the beauty that she expressed in her poetry, she took her own life in 1933 by taking an overdose of sleeping pills. She was 49 years old.

In all, Sara Teasdale had seven books of poetry published in her lifetime. Her finely crafted lyrical poetry was admired, especially by the public. Like the work of many female poets of the late 19th and early 20th centuries, hers has been somewhat forgotten.

Still, her female-centric work, with themes of love, death, and beauty earned her major accolades and prizes, some critics were a bit dismissive of her earlier work. For example, Rivers to the Sea, which earned her the first Columbia Poetry Prize in 1918 (later renamed the Pulitzer Prize for Poetry) was deemed by the New York Times Book Review contributor deemed the book “a little volume of joyous and unstudied song,” and concluded, “Miss Teasdale is first, last, and always a singer.” None of her biographies describe her as a singer, so this assertion is quite curious.

Her later works, including Flame and Shadow (1920), Dark of the Moon (1926), and Stars To-Night (1930) earned her more serious considerations, with reviewers praising the development of her lyric poetry and the artistry in her craft. Strange Victory, her last collection, was published shortly after her death by suicide in 1933 and praised as one of her most significant works.

Some contemporary scholars have argued that Sara’s body of work has been unjustly neglected over the years. For example, Carol B. Schoen, author of the 1986 critical biography, Sara Teasdale, considered her one of the most important lyric poets, yet long overlooked “in favor of more controversial or militant female poets.” This attitude prevailed despite even Sara’s anti-war poetry during World War I.

Sara Teasdale is an intriguing American poet whose work seems ripe for reconsideration.