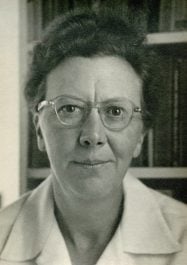 I became aware of novelist and poet Ruth Moore (July 21, 1903–December, 1989) while vacationing in Maine. Walking through a parking lot in Acadia National Park, I spotted a bumper sticker: “I Read Ruth Moore.”

That’s how a lotof people learn of Ruth Moore. Like me, they spot one of the three hundred bumper stickers spread around eastern Maine by publisher Gary Lawless and then they begin to investigate.

What they’ll find out is that Moore was a best-selling novelist (her second novel, Spoonhandle, spent 14 weeks on the New York Times bestseller list, along with George Orwell and Somerset Maugham, when it was published in 1946).

They’ll learn that Moore was born on a small island off the coast of Maine, and in the course of her life published numerous novels that portrayed the “wonderful, real folks” of coastal Maine and, in the words of one reviewer, “rounded them out into a community, so we see them not so much as individuals, but as a whole.”

The world is filled with best-selling novelists who are never heard from again, but I found myself drawn to Moore when I learned that this island-born Mainer had also lived in Greenwich Village and worked for a time for the NAACP (National Association for the Advancement of Colored People, a civil rights organization formed in 1910) in New York.

In 1930, Moore went to the American South on behalf of the NAACP to investigate the case of two young African-American men convicted of murder. Moore uncovered evidence to free them.

In 1935, novelist Alice Tisdale Hobart (Oil for the Lamps of China) hired Moore as a typist and personal assistant. In that role, Moore lived in Washington, D.C., and Berkeley, California.

While back home in Maine for a visit in 1940, Moore’s sister, a high school teacher, introduced her to a former student, Eleanor Mayo, also a writer. Mayo, then twenty years old, returned to California with Moore, planning to attend the University of California. The two spent the rest of their lives together.

In a 1987 interview for Down East magazine, Moore said she began writing her first novel, The Weir, out of homesickness. “I began to write that story as a way of escaping from that awful [California] weather,” Moore said. “You can’t imagine how homesick I was for snow. I remember how many times I would get up from the typewriter, go to the window, look up at the snow-capped peaks of the high Sierras, and just stand there with tears rolling down my cheeks.”

Perhaps it was the “awful” California weather that drove Moore and Mayo to New York City in 1941. There, Moore went to work for Reader’s Digest while continuing to work nights and weekends on The Weir. After twenty-five rejections, The Weir was published in 1943, and was described in the New York Times as “a notable first novel” that “tells a rugged, sea-swept tale.”

But Moore’s novels deal with much more than men and their boats. Strong women are always present in her books. In The Weir, we have Alice, who wants to marry, but only on her terms:

“She couldn’t explain the way she had felt, seeing him sit down at her breakfast table, because the way she had felt wouldn’t make sense to any man—one side of her glowing with satisfaction at having him there, enjoying her good food, the other side shriveling with fury at the way, just like her father, he had pulled up to the table and took for granted that her province was to feed and wait on him. How could you explain that something you liked tremendously at the same time belittled and affronted you?”

Moore plumbs even deeper with the character of Sarah Comey, mother of three young men. As Sarah watches one son do everything he can to undermine the success of his brothers, even if it means their destruction, she makes one of the most difficult decisions any parent must make, ending the life of one son so that her other children can survive. 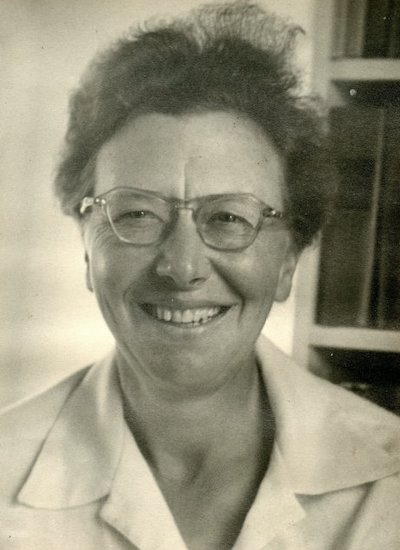 A Bestseller and a Movie

In 1945, Moore published a short story, “It Don’t Change Much,” in The New Yorker. In 1946, she published her second novel, Spoonhandle. Here we find another strong woman — Ann Freeman, returning to her home in a Maine fishing village in search of a quiet place to write after earning a degree at the Columbia School of Journalism.

She is joined by a less appealing figure, Agnes Flynn, who plots with one of her brothers to profit at the expense of others in the village, and by several other women. These include the well-meaning Mary Mackay, who attempts to foster a young orphan, and Mary Sangor, a Portuguese woman ostracized by Agnes Flynn and many other ladies in the town.

This book sold over a million copies and was made into a film, Deep Waters. Sadly, only one of these women — Mary Mackay — made it into the movie version of Spoonhandle. There is a character named Ann Freeman, but she is nothing like the character in Moore’s novel, either in her circumstances or her motivation, despite the prominent, full-screen crediting of Moore and her novel in the opening frames of the film.

Fortunately, that remaining career was a good one. With the money from Spoonhandle, Moore and Mayo purchased land on Mount Desert Island, the location of most of Maine’s beautiful Acadia National Park. Together they built a house from recycled and second-hand materials.

The structure grew as the years passed, and over the decades to come, Moore published twelve more novels and three books of poetry. Her niece (now literary executor) Emily Trask-Eaton collaborated with Moore to set nearly 40 ballads to music. Some of those have been performed by singer Katie Zaffran. Folksinger Gordon Bok recorded Moore’s ballad “Little River” on his 1975 album Bay of Fundy.

Mayo published five novels of her own and then turned to local politics. In 1950, she became the first woman elected to the board of selectmen in the town of Tremont, Maine.

Most of Moore’s novels are set among the island and coastal towns and villages of Maine in the mid-twentieth century. But the issues Moore grapples with in her depictions of these communities are surprisingly contemporary. How does income inequality (in the form of wealthy “summer people”) affect the local population? How do people respond to ethnic diversity? (In Spoonhandle, in the form of Portuguese immigrants; in Speak to the Winds, a later novel, in the form of then-called mulattoes, Greeks, Italians, and Native Americans.)

Bad marriages, class conflicts, real estate deals, the role of women, competition for resources, political corruption—these are all situations that plague the most charming community at one time or another, but in the words of one reviewer, “it’s hard for Miss Moore to maintain a villain, because by the time she gets him properly set down you’re on his side to some extent, just through the exuberance and totality of her portrayal.”

In Speak to the Winds (1956), Moore depicts an island village split apart, first by the question of who is at fault, and who will pay for a replacement when the church furnace explodes during the town’s Christmas pageant. As the months pass, the town grows increasingly polarized. Neighbors refuse to speak to neighbors. The postmistress reads and intercepts mail. People boycott one another’s shops.

It’s a situation all too familiar today. At one point, a character in Speak to the Winds suggests that she can tell which side people are on simply by looking at the way they are dressed — one group in clean but plain clothing, the other group attired in a manner that strikes the character as somewhat pretentious. It takes a disastrous fire to pull the town together again:

“On the shore, people from the village had come, black, running figures are seen hazily through smoke. Two of them were tearing down the rocks, waving arms, yelling … The whole town. Coming together. To see what might be done.”

To Moore’s mind, she told the story not just of Maine, but of people throughout the country as small town life changed. At the height of her popularity, in the 1950s and 1960s, her books were often chosen by subscription book clubs and translated into other languages. Even at that time, however, she was characterized as a regional writer, and by 1983, her books were out of print. 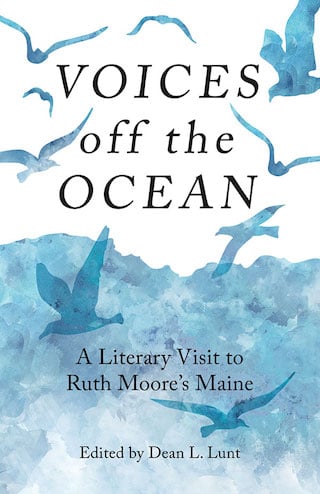 It’s fitting that Moore, the portrayer of Maine’s communities, warts and all, has been taken up by a community of Maine book lovers. If you’re in Maine, it’s not hard to find Ruth Moore once you know to look for her. Lawless, co-owner of Gulf of Maine Books in Brunswick, discovered her when his mother told him to read Moore. He looked for used copies of her out-of-print books and started a letter-writing campaign to get her books back into print.

When he consulted Moore, who he got to know in the last years of her life, she said, “Why don’t you do it?” Through his Blackberry Books press, Lawless did just that. In 1986, he published a reprint edition of The Weir, Moore’s first novel, and in the years that followed, he would reissue ten additional titles.

As Lawlesss aged, he felt the need to pass on the responsibility for keeping Moore’s work in print. Dean Lunt of Islandport Press has taken up the task.

Like Moore, Lunt grew up in a fishing village on an island of the coast of Maine. As someone from the island communities who had become a successful writer, Moore was familiar to Lunt, despite his being many decades removed from her.

Aided by the advent of digital printing, Lunt has been able to bring Moore’s titles back onto the shelves in bookstores throughout the state, a project he is continuing, and one in which the larger community of readers who live in or visit Maine have taken part.

The Bass Harbor Memorial Library now celebrates her birthday with Ruth Moore Days, which feature a community reading of her work and offers other tributes to this author increasingly embraced by those who know and love Maine as the writer most adept at “catching the nature, character, and personality of her people.”

In 2018, the Stonington Opera House mounted a production of “I Have Seen Horizons: Ruth Moore’s Stories from Maine.” The title—I have seen horizons—comes from the single line typed on a sheet of paper found in Moore’s typewriter at the time of her death.

“It’s ironic,” Lunt observes. “Moore bristled against the depiction of her work as having a regional focus, but it’s her focus on Maine that is the reason we can still sell her. She’s unique in her descriptions.”

He notes as well that it was because of Moore’s experiences living in New York, working in the South, and then in California that she was able to come back to Maine with a fresh perspective and capture in her books what was unique about these island communities and describe them so vividly that they still speak to readers today.