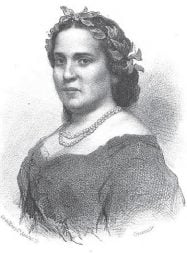 Gertrudis Gómez de Avellaneda y Arteaga (March 23, 1814 – February 1, 1873), a Cuban-born Spanish writer, was considered one of the most romantic writers and greatest women poets of the 19th century.

Avellaneda was born in Santa Maria de Puerto Principe, currently known as Camagüey. Upon arriving in Cuba in 1905, her father, Manuel Gómez de Avellaneda y Gil de Taboada was a Spanish naval officer in charge of the port of Nuevitas.

Her mother, Francisca María del Rosario de Arteaga y Betancourt, was a criolla and a member of the wealthy Arteaga y Betancourt family, one of the most high-ranking families in Puerto Principe.  Gertrudis was the first-born of the couple’s five children, but only she and her younger brother, Manuel, survived past childhood.

Avellaneda, or “Tula,” as she was nicknamed, grew up spoiled, as the family’s slaves did all the household chores. This left her with a lot of free time, which she used to read excessively. She had impressive tutors as well, one being Cuban poet José María Heredia.

Her father passed away in 1823 when she was nine years old. Ten months later, her mother married Gaspar Isidoro de Escalada y López de la Peña, a Spanish lieutenant colonel stationed in Puerto Principe. Avellaneda was not fond of her stepfather as she felt he was too strict. Thankfully, she would only see him perhaps three months out of a year, as he was often stationed away from home.

At the age of thirteen, her grandfather arranged for her to marry a distant relative who was among one of the wealthiest men in Puerto Principe. In exchange for marrying him, her grandfather promised to give her a fifth of his estate. Two years later, at the age of fifteen, Avellaneda canceled the engagement, resulting in being cut out of her grandfather’s will. This upsetting experience fostered her deep resentment towards arranged marriages and patriarchal authority. In 1836, there was fear of a potential slave rebellion in Cuba. As a result, Escalada had his wife sell her property and slaves, leave Cuba, and go to Spain. Avellaneda was in favor of this plan, as she wanted to meet her father’s family in Andalusia, a southern community in Peninsular Spain.

By April 9, 1836, the family started their journey to Europe via  Bordeaux, France, arriving in the city of A Coruña in Galicia, Spain, where they stayed for two years.

In Galicia, she met her fiancé, Francisco Ricafort, the son of Mariano Ricafort, a Capital-General of Galicia. Yet the couple never did marry, because Avellaneda wanted to wait until she was economically independent. This would prove daunting, as her stepfather withheld her inheritance.

Francisco was sent over to fight in the Carlist Wars, so Avellaneda decided to leave Galicia and go to Seville with her brother Manuel. This was the last time she would ever see Francisco, though Avellaneda was delighted to finally leave Galicia. She was often criticized by Galician women for refusing to do manual labor and for her passion to study.

After arriving in Seville, Avellaneda fell in love with Ignacio de Cepeda y Alcalde, a wealthy and educated young man. He became the focus of her writings, as she considered him her first real love. Between 1839 and 1854, there were a total of forty love letters which his widow later inherited and published after his death.

In July 1839, she wrote an autobiography, which biographers have perhaps over-relied on for information about her early life. Avellaneda wrote it intending to make a good impression on Cepeda. It was the second of four autobiographies she wrote in her lifetime.

Despite their immense love, the two did not get married. Cepeda felt that she was not rich enough and did not like her outspoken ways, a trait seen as too aggressive for women of her time. When their relationship ended, she left for Madrid.

Heartbreak at the peak of her career

Madrid was home to many of Avellaneda’s love affairs, some including prominent writers connected to Spanish Romanticism. In the course of her busy love life, she was engaged on and off several times.

One affair was with Seville poet Gabriel Garcia Tassara. They had a daughter out of wedlock in 1844. Tassara refused to acknowledge the baby as his, and she died at nine months, leaving Avellaneda heartbroken.

After Tassara broke her heart, she met and married don Pedro Sabater, a wealthy writer and poet, on May 10, 1846. Shortly after their marriage, Sabater fell ill with what was believed to be cancer of the larynx and died, leaving Avellaneda devastated. After his death, she wrote Egilona, a play that didn’t receive positive reviews.

In January 1853, Avellaneda attempted to enroll in the Royal Academy. A seat opened up after the death of her friend, Juan Nicasio. Even though many of its members respected her work, it was taboo for women to write publicly. Although the all-male academy members were impressed by her writing ability and works, in the end they refused to allow a woman into the Royal Academy. 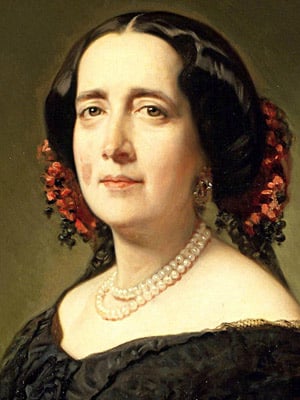 On April 26, 1855, she remarried colonel don Domingo Verdugo y Massieu. As a result of her husband’s injuries, the couple had to move from Madrid back to Cuba, their birthplace, in 1859. They had a close relationship with Francisco Serrano who, at the time, was the captain-general of Cuba.

Upon arriving in Cuba, concerts, music, and parties welcomed her. Verdugo’s health deteriorated soon after their arrival to Cuba and on October 28, 1863, he passed away. This left Avellaneda distraught, so she set off to visit New York, London, Paris, and Seville, and ultimately returned to Madrid.

Avellaneda’s writings were most popular in the 1840s and 1850s. Themes in her stories included love, feminism, and an evolving world. Her writing style was influenced by French, English, Spanish, and Latin American poets, especially  Hispanic poetry deriving from late neoclassicism and romanticism.

Her writings often reflected on her experiences and were infused with the bold attitude she had to adopt to navigate a male-dominated society. She also wrote of her exile from Cuba, and her bouts with depression. There are many other themes present in her works, including love, eroticism, neoclassical concepts, religion, philosophical meditations, and historical references.

One of Avellaneda’s most famous and controversial novels was Sab, published in 1841. This novel spoke out against slavery and was banned in Cuba due to its unconventional approach to problems in society. The novel, along with many others, was considered scandalous because of themes of interracial love and divisions within society. 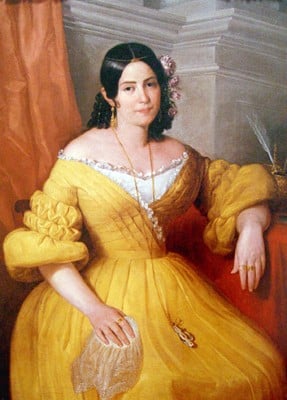 In 1845, Avellaneda was awarded two prizes in a poetic contest organized by the Liceo Artístico y Literario de Madrid.

On August 20, 1895, The New York Times stated that “Gertrudis Gómez de Avellaneda, the great Cuban poetess, is declared by all critics to have no equal in modern times.”

On June 4, 1896, the newspaper reports on a ceremony held in honor of Avellaneda given by Fidel Pierra:

“Fidel Pierra, the chairman of the fair committee, described the life of the foremost Cuban poetess. No one in the whole Spanish, Parnassus said, was to be compared with Gertrude Gomez d’Avellaneda, who was born in Cuba in 1814, and did most of the beautiful work of her life there. Mr. Pierra’s appreciative tribute was the first which has been paid in the congress to the genius of a Cuban woman.” (Multiple News Items 12)

Avellaneda was one of the few nineteenth-century poets to be granted two laureates as a tribute to her talent. The first laurel crown was awarded to her in Madrid by Liceo artistico y literario in 1844 and the second was awarded in Havana by Cuban Liceo IN 1860.

On August 25, 1900, The New York Times published an article under the title “Cuban literature” that suggested that Avellaneda was a female literary genius by emphasizing her precocity as a writer.

In her final years, Avellaneda lived in Madrid. Soon after her brother Manuel’s death in 1868, she published her first volume of collected literary works. She decided to omit Sab and Dos Mujeres  because of the extreme controversy of these two works. On February 1, 1873, the prolific writer passed away in Madrid at the age of 58. She was buried in Seville next to her dear brother Manuel.

In 2009, Cuban authorities requested that her remains be transferred to Cuba, but Seville and the Canary Islands firmly rejected doing so. Today, Avellaneda is widely viewed as the “epitome of the Romantic poet, the tragic heroine who rises to public acclaim yet, in private, is bitterly unhappy.”