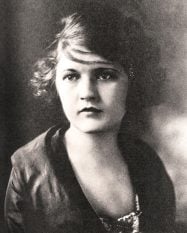 Zelda Fitzgerald (July 24, 1900 – March 10, 1948), known for her beauty and personality, made a name for herself as a socialite, novelist, dancer, and painter. She was far more than merely the wife of writer F. Scott Fitzgerald, who called her “the first American flapper.”

Born Zelda Sayre in Montgomery, Alabama, she met Scott at a country club dance in 1918, when he was stationed outside of Montgomery during WWI. He was immediately taken by Zelda, and their passionate and tumultuous relationship began — as did Scott’s liberal borrowing of material from her letters and diaries for use in his own works.

Although friends and family were not necessarily in favor of their match, Zelda agreed to marry Fitzgerald once his first novel, This Side of Paradise, was published. He finished it in the fall of 1919 and urged his editor, Maxwell Perkins, to hurry the release. This Side of Paradise was published March 26, 1920, and the couple was married on April 3rd at St. Patrick’s Cathedral. 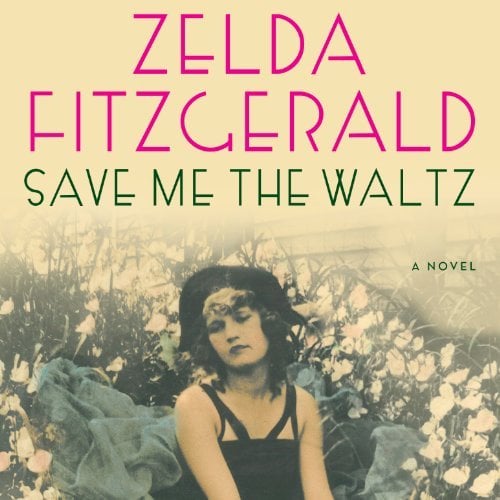 This Side of Paradise not only sold its initial 3,000 print run, but two subsequent runs within a month, and with that success, Zelda and Scott became celebrities and icons of the Jazz Age.

On October 26, 1921, Zelda gave birth to their first and only child, Francis “Scottie” Fitzgerald. As Zelda emerged from anesthesia, Scott recorded her saying of her daughter, “I hope it’s beautiful and a fool — a beautiful little fool.” He later paraphrased this quote in his most famous novel, The Great Gatsby, having Daisy Buchanan say after giving birth: “I’m glad it’s a girl. And I hope she’ll be a fool—that’s the best thing a girl can be in this world, a beautiful little fool.”

After the publication of Scott’s second novel, The Beautiful and the Damned, the New York Tribune asked Zelda to write a review of her husband’s book. The piece led to other offers from magazines, including the 1922 “Eulogy on the Flapper” for Metropolitan Magazine. 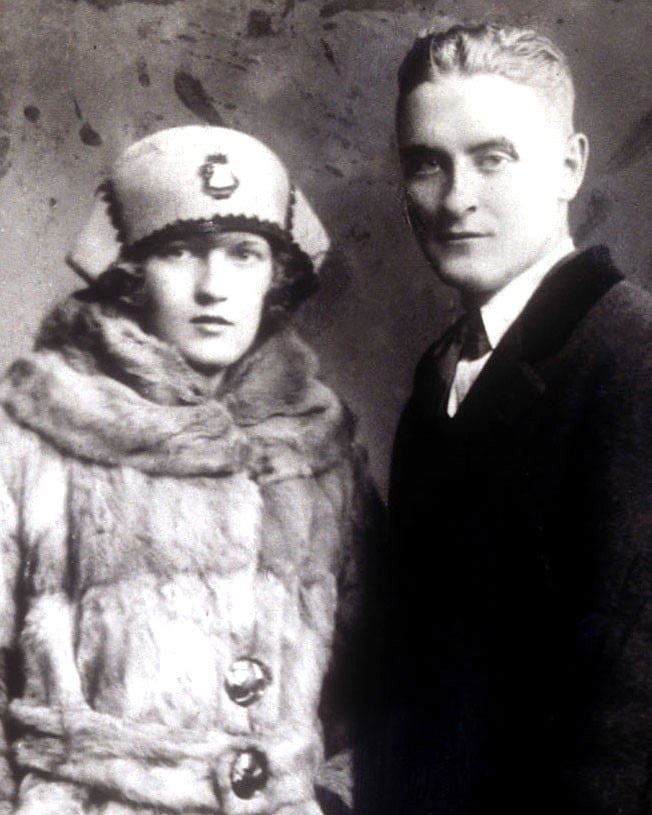 A move to France; Save Me the Waltz

In 1924 the Fitzgeralds moved to Paris, having burned through their money. Zelda began an affair with a French pilot, Edouard S. Jozan, and asked Scott for a divorce. Amid their marital drama, Scott finished The Great Gatsby and Zelda attempted suicide with sleeping pills.

In Paris the following year, Scott became friends with Ernest Hemingway, although Zelda and Ernest openly detested one another. Zelda pursued many of her own artistic ventures. She was a painter and later became obsessed with ballet, dancing up to eight hours a day. Scott was dismissive of her goals and wrapped himself in writing and alcohol.

As the 1920s progressed their relationship was strained and their creativity was hurt by mental and emotional struggles and addictions. Their partying had turned self-destructive toward the end of the 1920s, and in 1930 Zelda was admitted into a sanitarium in France, where she was diagnosed with schizophrenia.

While admitted to another clinic in 1932, Zelda wrote a novel called Save Me the Waltz in six weeks and sent it to Maxwell Perkins, Scott’s publisher at Scribner’s. When Scott found out about the novel he was furious. He forced her to rewrite parts of the novel that he considered too autobiographical, as well as parts that he planned on using in Tender is the Night, which would be published in 1934.

The first edition of Save Me the Waltz was published October 7th, 1932 in a print run of just 3,010 copies. It sold only 1,392 copies for which Zelda earned $120.73. Between the poor sales and her husband’s criticism of the work, Zelda’s spirit was crushed. It was the only novel she would publish. 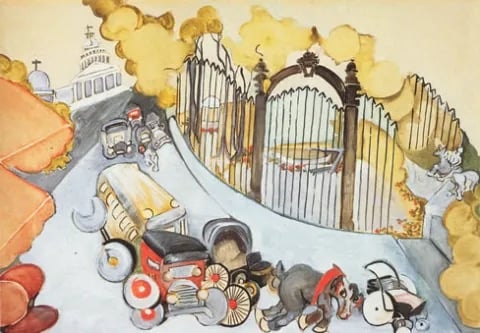 As her paintings and other hobbies were also not well received, Zelda became more reclusive and mentally unstable. In 1936 she was admitted into Highland Hospital in Asheville, North Carolina, a place she would return to on and off for the remainder of her years.

In 1937, Fitzgerald moved to Hollywood to work in the film industry and began an affair with movie columnist Sheila Graham. Scott was bitter toward his wife, blaming her for his recent failures. Despite their troubles, the couple took a trip to Cuba together in 1939. It was disastrous, and when they returned to the states, Scott returned to Hollywood and Zelda to Asheville. They never saw one other again.

F. Scott Fitzgerald died at the age of forty-four in 1940. That same year, their daughter Scottie was married. Zelda missed both events. On March 10th, 1948 a fire broke out at Highland Hospital where Zelda was in residential treatment. She was locked in a room for electroshock therapy and unable to get out, she perished in the fire along with eight other patients. 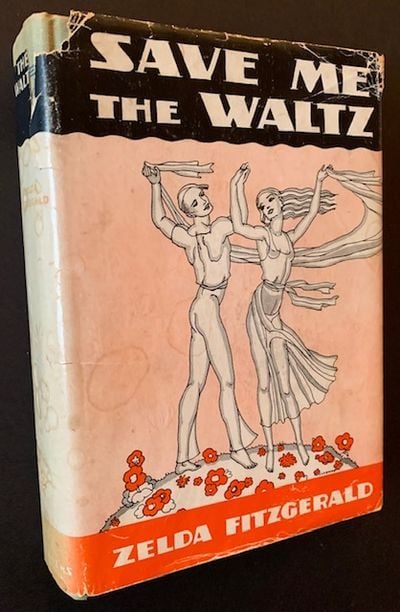 Zelda: A Biography, the first book-length treatment of Zelda’s (1970) was written by Nancy Milford when she was in graduate school. It was a bestseller and finalist for the National Book Award and Pulitzer Prize.

Guests on Earth By Lee Smith: This novel by author Lee Smith is set in Highland Hospital in Asheville, North Carolina from 1936 – 1948, during the years Zelda was a resident and was killed in a fire.

Call Me Zelda by Erika Robuck: First published in 2013, this novel is set in a Baltimore Psychiatric hospital in 1932 where a nurse befriends Zelda and gets drawn into her tumultuous world.

Dear Scott, Dearest Zelda : The Love Letters of F.Scott and Zelda Fitzgerald: The twenty-two-year love story between Scott and Zelda is documented in this work through their letters. It includes 333 letters illustrated by photographs.

Zelda Fitzgerald: Her Voice in Paradise by Sally Cline: Published by Arcade Publishing in 2003, this book is described as a “Tragic, Meticulously Researched Biography of the Jazz Age’s High Priestess.”

Beautiful Fools: The Last Affair of Zelda and Scott Fitzgerald: This 2013 publication focuses on Zelda and Scott’s 1939 trip to Cuba, the last time the couple saw each other. It describes their last attempt to grasp at love and happiness after the brightness of their earlier star had faded.

Contributed by Amy Manikowski: Amy has worked in books her entire life, starting at the David A. Howe Public Library in Wellsville, NY. In college, she began working in a bookstore, a career that lasted fifteen years. She received her MFA in creative writing from Chatham University in 2004. Since graduate school she has been in love with traveling and writing about the South, moving first to Savannah, GA, then Kentucky and South Carolina, before setting in 2011 in Asheville, North Carolina. Amy blogs at Daily Inspiration for Writers.

This article was originally published as Zelda Fitzgerald — the First American Flapper on biblio.com. Reprinted with permission. 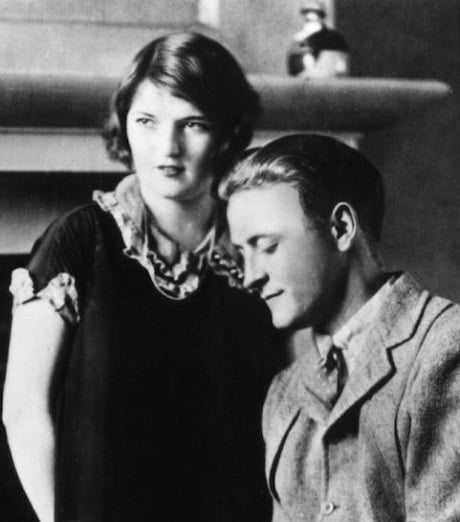