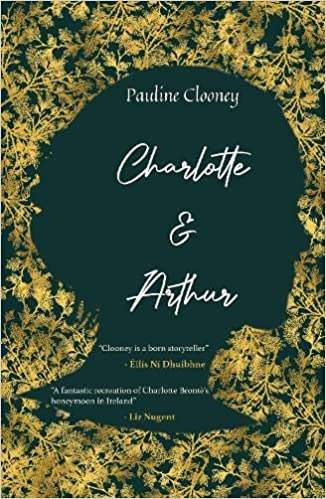 Charlotte & Arthur by Pauline Clooney (2021) is a richly imagined novel about the wedding and subsequent Irish honeymoon of Charlotte Brontë and Arthur Bell Nichols, the curate who worked with her father at Haworth parsonage.

This illuminating narrative is based on meticulous research by Ms. Clooney, an award-winning short story writer and the founding director of Kildare Writing Centre in Ireland. This is her first full-length novel.

The novel focuses on a little-known time in Charlotte’s life. Though she’s a celebrated author at home and abroad, the siblings she grew up with (Emily, Anne, and Branwell Brontë) all died several years earlier, leaving only Charlotte and her father, the Reverend Patrick Brontë, from a family that once numbered eight members.

Though it’s hard to imagine that Charlotte isn’t still quite bereft and lonely, the Rev. Brontë isn’t enthusiastic about her marriage to his curate. Charlotte herself took many years to warm up to Arthur. But finally, he won her heart, and this is where we pick up the story.

From the publisher (Merdog Books): It is the morning of June 29th, 1854, here is the groom coming up the cobbles in Haworth, for his nuptial appointment with Charlotte Brontë. Only a handful of guests have been invited, and you, dear Reader, are one of them …

Charlotte Brontë has married her papa’s Curate, Irishman, Arthur Bell Nicholls. At thirty-eight years of age, and the unlikelihood of there ever being further proposals, Charlotte’s dread of the lonely life of the spinster has convinced her that this is a calculated risk she must take. Read More→