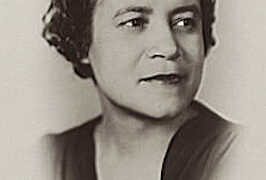 Here’s a selection of poems by Jessie Redmon Fauset (1882 – 1961), a multi-talented and influential figure in the Harlem Renaissance movement of the 1920s.

Fauset was the literary editor of the magazine of the NAACP, The Crisis, and in her own right, a poet, essayist, translator, and novelist.

While working at The Crisis, she had the opportunity to publish her own work, which included editorials, stories, and  poetry, all of which were appreciated by readers and literary critics.

The last of Fauset’s four novels, Comedy, American Style, was published in 1933. Soon after, she dropped out of the literary life and started a second career of teaching French in secondary school.

Some of the subject matter of Fauset’s poems is dark and rather grim. For example, “Oblivion” tells of a desire to lie in a deserted, neglected grave far from everyone and everything. Others, like “Dead Fires” and “La Vie C’est la Vie” are fatalistic.

Ann Allen Shockley observed in Afro-American Women Writers that Fauset’s works, both fiction and poetry, “By choosing unpopular topics … Fauset challenged the preconceptions of the publishing industry and opened the way for literature which would appear in succeeding decades.”

Jessie Redmon Fauset’s writings were largely forgotten by the time of her death in 1961, Read More→